“Spain is Different” – that was the slogan devised in the 1960’s to sell the country as a popular tourism destination. And Spain is different as this wonderfully rich book never ceases to explain. Different because it has been bedevilled by a ruling elite which does not accept public duty does not entail lining your own pocket and those of your friends and colleagues. 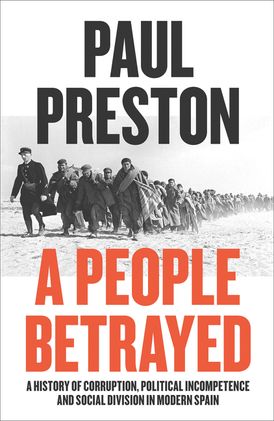 What Preston does is give a material explanation for this s that it does not rest on the failings of some supposed Spanish character or other guff. Instead its origins lie in the failure, in the 19th century, to go through the change which occurred with German and Italian unification and with the Meiji Restoration in Japan, the creation of a legal and political system which benefitted industry and finance in the accumulation of capital. So, the fact that the judiciary is not independent still scars the rule of law.

The book starts in 1874 because that ended an experiment which might have brought Spain into line with other Western European states, the brief existence of the liberal First Spanish Republic. It sought to create a federal Spain (that would have resolved the Basque and Catalan questions), the separation of church and state and measures such as the introduction of free education for all.

Unfortunately, the support for this brief experiment was too socially narrow; a section of the army, industrialists and the intelligentsia. Outside of Catalonia, Asturias and the Basque Country there was little industry and the dominant section of the ruling class were the great landowners of central and southern Spain. They allied with the conservative section of the army and the Church to bring down the Borbón monarchy. In truth the industrialists and bankers had deserted the Republic because the hopes it had created sparked unrest on the great estates and in Catalonia where an insurgent working class was emerging.

The army became a clear player intervening again and again to replace governments or to change policies. Unable to win wars abroad – Spain humiliatingly lost Cuba and the Philippines to America in 1898 – it increasingly saw the main enemy as being at home; liberals and left wingers, Freemasons and from very early on Catalans, who threatened the unity of the Patria.

The restoration political system held for the next half century run by dynastic families drawn from the great landowning class or its placemen. Formally a Conservative and Liberal Party competed for office, but this was rigged. The King chose who governed with the two sides replacing each other. Voting was completely rigged in most of Spain where on the land especially the great landlords bought and stole votes, falsified the figures and intimidated anyone who stepped out of line.

Political, central and local government jobs were bought and sold. The two “parties” had no member or structure and relied on donations from bankers especially.

The Catalan capitalist class chaffed at this because they were excluded. Preston points out:

He might have added that since the end of the First Spanish Republic in 1874 no Catalan has been Prime Minister of Spain.

But while they chaffed, they went along with this because of their fear and hatred of their own working class.

To fast forward the end of the First World War, in which Spain was neutral and which caused an inflationary boom, led to an explosion of working class unrest in Catalonia led by the CNT, the anarcho-syndicalist union federation, on the land among landless labourers on the great latifundias of the South and the rise of middle class Catalan nationalism (the Basques were slower to follow).

In 1923 a General, Primo de Rivera proclaimed himself the “iron surgeon” of Spain and with the backing of the King established a dictatorship. In Catalonia the guns of hired assassins and the power of the state were turned on the CNT, the language was outlawed from public use and FC Barcelona banned from playing.

Under Primo corruption flourished as the fish rotted from the head down, but unlike Mussolini in Italy, whom he greatly admired, he had no mass movement independent of the state. He relied on the army, his fellow generals and the King, also mired in corruption.

Faced with the Wall Street Crash and the onset of the Great Recession Promo was brought down and soon after the King went down as the popular masses demanded a Republic. The Second Republic was a second chance to kick Spain into the 20th century but its story is tragically too well known. The great landlords, bankers, industrialists and the Church were prepared to bring it down by any means. Eventually that involved a military coup which would part fail because of popular resistance, especially in the great cities.

The initial failure of the coup meant a long civil war. Among the generals Francisco Franco grasped that a long war would allow him to wear down and destroy the left and to develop mass terror in the areas he occupied. Helped by Hitler and Mussolini he defeated the Republic which could only rely on the half-heated support of the USSR.

Preston is an accomplished historian of the Civil War and the Franco dictatorship which follows. Here, his description of the Franco years is masterful. The Caudillo, presiding over a coalition of fascists, monarchists, generals and Cardinals, was masterful at playing divide and rule but Preston also shows he used corruption to keep them all in line. Corruption flourished during the dictatorship. Franco and his clan accumulated great wealth, titles and palaces, all of which they kept under the new democratic Spain.

What Preston ends on is, first, how the transition to democracy agreed after Franco’s death in 1975 left the institutions and personnel of the Franco state in place. The great families kept their positions on the boards of the banks and state run monopolies. Fear of rising working class insurgency and rebellion in the Basque Country meant the German Social Democratic government spent much time and many Deutsch Marks pressurising the opposition to compromise with “reformist” Falangists and Franco’s designated heir, King Juan Carlos. There was nothing like the De-Nazification measures brought in after 1945 in Germany. Instead a veil was drawn over the Civil War, war crimes and those of the dictatorship.

Under first the long Socialist government of Felipe Gonzalez and then under the centre right Popular Party those state run industries were privatised, but very much in the way it would be done later in Russia. The same people stayed running them and maintained their close links with government and the banks. That was one source of the corruption which has be-devilled democratic Spain and is so well described by Preston.

The second was the fact that the two main political parties relied on donations for funding and that they both continued and developed the tradition of rewarding supporters and donors with contracts, positions and much else. Under the casino economy which followed Spain joining the Euro and a housing boom based on low interest corruption soared embracing the Royal Family. When the crash came in 2008 popular anger would turn on the politicians and their backers. But Spain’s judiciary, with judges appointed based on party allegiance moved with glacial slowness as more and more cases of high level corruption emerged.

The old two party system would be swept away. Another issue was emerging. In Catalonia support for independence soared from nowhere after the Spanish Supreme Court struck out key clauses of a new Statute of Autonomy agreed by the Spanish and Catalan Parliaments and by a referendum in Catalonia. The case was brought by the Popular Party. Coming on the back of the 2008 crash, the subsequent savage recession and the imposition of austerity Catalans began looking for the exit door.

Paul Preston is the preeminent historian of modern Spain, something acknowledged there. What he has done here is explain with great care and detail why Spain is different. As I read it former King Jan Carlos was becoming the subject of growing media attention over kick backs he had allegedly pocketed from Saudi Arabia over the awarding of a high speed rail project and his use of his former mistress to access Swiss bank accounts. Corruption runs deep in Spain’s elites and Preston explains why so well.

This book is simply a must read.

Chris Bambery – These are Dark Days for Democracy in Spain

Spain is currently not a beacon of democracy in the EU. Its cack-handed manner of dealing with the Catalan independence referendum and ensuing inexorable persecution of Catalan politicians has little to do with democracy. This […]

Today, 12 February, the trial of twelve Catalan politicians and social movement leaders involved in the October 1, 2017 independence referendum commences. It is a travesty of justice, being tolerated by the EU and Social Democrat […]