Yesterday, on the hottest day ever recorded in the UK, the Government  launched its plans for delivering net zero aviation which is due to unleash unlimited growth of the sector.

‘Badvertising’ is a campaign to stop adverts fuelling the climate emergency 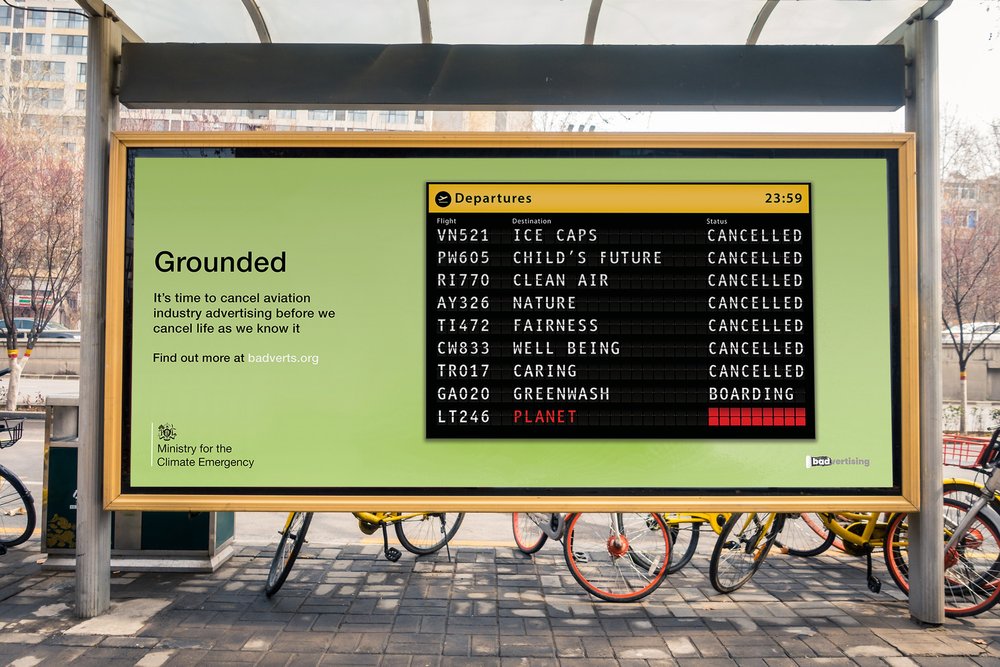 As the holiday season gets into full swing amidst airport chaos and a heatwave, prompting authorities to issue climate health warnings, it’s time for aviation industry adverts to stop fuelling the climate emergency.

The UK’s Jet Zero plan which is expected to rely heavily on offsetting plans that are considered practically flawed and lacking scientific credibility – will sit in the wider context of the industry’s track record of failing to meet even its own environmental goals, and the global industry’s Fly Net Zero plan, overseen by the aviation industry body IATA.

Recent analysis revealed that over a 20 year period, the aviation industry in the UK had missed 49 out of 50 of green goals (see below). Jet Zero is expected to follow the grain of Fly Net Zero, going against the advice of the official climate policy advisors, the Climate Change Committee which says the industry needs to manage growth in demand, and instead assuming growth with offsetting as a ‘get out of jail card’.

IATA’s plan imagines the number of passenger flights at least doubling by 2050. At the same time the Fly Net Zero plan ignores aviation’s non CO2 impacts, which is considered to account for around half of aviation’s climate impact. In other words, its plan only addresses half of the aviation problem. For a more detailed analysis of the limitations of the global industry response to the climate emergency see Pie in the Sky from the New Weather Institute.

Advertising wouldn’t be the multi-billion industry it is if it didn’t influence people, and in ways that people are often unaware of and unable to control. For that reason it’s been likened to a kind of ‘brain pollution’. To estimate effectiveness a measure called ‘return on advertising spend’ (ROAS) is used, that looks at how much sales increase based on a company or industry’s ad spend. One recent estimate looking at the degree to which global car and airline ad­vertising increased demand, suggests that in 2019,  the airline industry’s additional emissions driven by advertising are significant. Greenhouse gas emissions attributable to airline advertising globally in 2019 are in a range that could be up to the equivalent of 34 million tonnes of CO2 – the same as burning 17 million tonnes of coal.

For adverts for flights in the EU alone, additional greenhouse gas emissions in 2019 could be as high as 9 million tonnes of CO2, roughly equivalent to burning 21 million barrels of oil.

Global aviation pollution was rising steadily with the expanding industry prior to the pause caused by the Covid 19 pandemic. Now most airlines are scrambling to reassure their investors that they will return to pre-pandemic passenger levels and expand beyond this, adding new short- and long-haul routes; with chaos ensuing as they attempt to operate with a fraction of their staff following massive lay-offs – despite government bail-outs. The result can be seen in a swathe of flight cancellations as the European summer travel season gathers pace, raising the additional question of whether the industry should be advertising for more customers regardless given that it seems incapable of meeting existing demand. Wider safety concerns for airline staff, and fraught relations between them and airline owners and management, paint a picture of an industry that seems to care as little for its own workers as the health of the planet.

The global aviation industry’s proposed scheme for climate action, Fly Net Zero, is not a credible plan. Analysis suggests it will put global biodiversity at risk and compete with food production without reducing aviation’s climate impact. In IATA’s plan that allows for at least a doubling of global air passengers by 2050, attempts to “decarbonise” aviation disregard the existence of aviation’s non-CO2 climate impacts which roughly equal the impact of emissions of carbon dioxide from planes. Ignoring them means only addressing half of the problem. Unconstrained airport expansion and flight growth could see the global heating effects of airplane contrails triple between 2006 – 2050.

Over the next decade, during a period when it is crucial to reduce climate impact, emissions and non-CO2 effects are set to increase, only being “off-set” by mechanisms that are thought will, “do almost nothing to tackle the emissions from flying”. From 2035 to 2050 the plan envisages a switch to biofuels, requiring three times as much aviation biofuel as the present global production of all liquid biofuels. Such a development would endanger global biodiversity, put more pressure on food production and prices, while increasing the risks of land grabbing. Other technological fixes such as small, very short haul electric flights will still be energy intensive and, research shows, play only a negligible role in replacing the bulk of flights. For example, current technology would limit a modest 9 passenger aircraft to fly on a journey of just 140km, in other words a short, simple train journey. In this context any industry wide claims of sustainability have to be considered greenwash. For the reasons explained above the same is set to be true of the UK’s Jet Zero plan.

All but one (49 out of 50) climate targets set by industry bodies and three of the UK’s largest airlines for the period 2000-2021 were missed. Most industry climate goals and targets have concerned two main categories: fuel efficiency and so-called ‘sustainable aviation fuels’. However, without action on limiting aviation growth, these measures are insufficient to meet climate targets because expected growth in demand exceeds expected efficiency gains, and the finite capacity to produce alternative aviation fuels without increasing unsustainable land use. While many of the goals had a target of 2020, it was necessary to go back through two decades of evidence to get a picture of the evolution of each target. In most cases, the targets were extended, changed, replaced or silently abandoned along the way. Altogether it indicates that targets are used by the industry to present an impression of action, direction and the existence of a plan to address aviation’s impacts, precisely in order to prevent action on managing demand and introducing checks and balances on the growth of the industry.

Targets missed included those from:

There is no credible regulation of greenwash in aviation advertising

At the same time that the aviation industry has no credible plan to meet climate targets, there appears also to be no credible regulation of the industry’s greenwash in its advertising.

In July 2021 the UK’s advertising regulator, the ASA (funded by the advertising industry), refused to investigate adverts by Qatar Airways that made the sole unsubstantiated claim “Fly Greener” to millions of viewers via the advertising boards at the UEFA Euros 2020.

In November 2021 the same body, the ASA, refused to investigate ads by airline Easyjet, designed by ad agency VCCP London, that promoted ticket sales using greenwashing claims about “Zero Emissions Flight” and carbon offsetting schemes (despite its flights being thoroughly fossil fuel dependent now, and well into the future). The ASA stated that since the regulator was undergoing a review of green claims in ads by the transport sector, it could not investigate ads by specific companies. This meant that the best available route for tackling greenwashing by airlines was effectively closed for a period of time, only very recently reopening.

The complaint in question was passed to another regulator, the Competition and Markets Authority in April 2022 , who have not confirmed to date whether or not they will investigate despite claiming to be cracking down on misleading green claims.

In 2021-2022 the ASA has also refused to investigate green claims by major polluters including Chevron, McDonald’s, Standard Chartered Bank and Barclays, as well as any green claims made in ads by the fast fashion and energy sectors.

Michael Hudson on a series of today’s relevant topics. Michael Hudson is President of The Institute for the Study of Long-Term Economic Trends (ISLET), a Wall Street Financial Analyst, Distinguished Research Professor of Economics at […]

In it’s first 100 days, how many times did top officials in charge of the EU’s Green Deal meet with lobbyists? Belén Balanyá is a researcher and campaigner at Corporate Europe Observatory Cross-posted from Open […]