Bill Law is the editor of Arab Digest. An award winning journalist, he reported extensively from the Middle East and North Africa for the BBC. In addition to numerous radio documentaries, his films have focused on the Arab Spring and its aftermath.

While the Gulf states have for several years been in a process of rethinking their relationships with the West, 2022 will go down as the year of a tectonic shift.

The signs were already in place regarding the direction of travel: successive US presidents had shown they had little interest in the Gulf beyond the sale of weapons and the stability of supply and the cheapness of oil in the global marketplace. Barack Obama had ignored the Gulf Cooperation Council (GCC) in pursuing a nuclear deal with Iran and Donald Trump viewed Saudi Arabia as a cash cow for weapons sales and his own family interests.

Senior Gulf leaders felt patronised, their voices not listened to, their concerns shunted aside. Mohammed bin Salman (MBS) had done himself no favours in ordering the killing of Jamal Khashoggi, brutal even by Saudi standards, which strained relations even further.

Still, the stage was set and it took one event to announce the new era was under way: Russian President Vladimir Putin sent his army into Ukraine on 24 February.

A Europe that had boxed itself into reliance on Russian oil and gas faced its most serious conflict since the end of the Second World War. In need of standing up to Putin while averting a war that could engulf them, the Europeans invoked sanctions while seeking to wean themselves off Russian energy supplies.

The price of oil and gas spiralled upwards and the Gulf hydrocarbon producers found themselves with a whip hand they had not possessed since the 1970s.

Arrogant myopia in US

The Gulf states positioned themselves as neutral, declining to go along with sanctions while joining in on UN motions condemning the invasion. But as the war progressed, it became clearer that they were seeing great advantage in a neutrality increasingly weighted towards the Russians, rather like what Switzerland achieved with the Nazis.

In March, the then UK Prime Minister Boris Johnson flew to Riyadh and a meeting with MBS. It was the first time since the killing of Khashoggi that a British prime minister had met with the crown prince. He was there to plead with MBS to up production in order to ease rampant energy inflation that threatened the UK economy. Johnson came away empty handed. 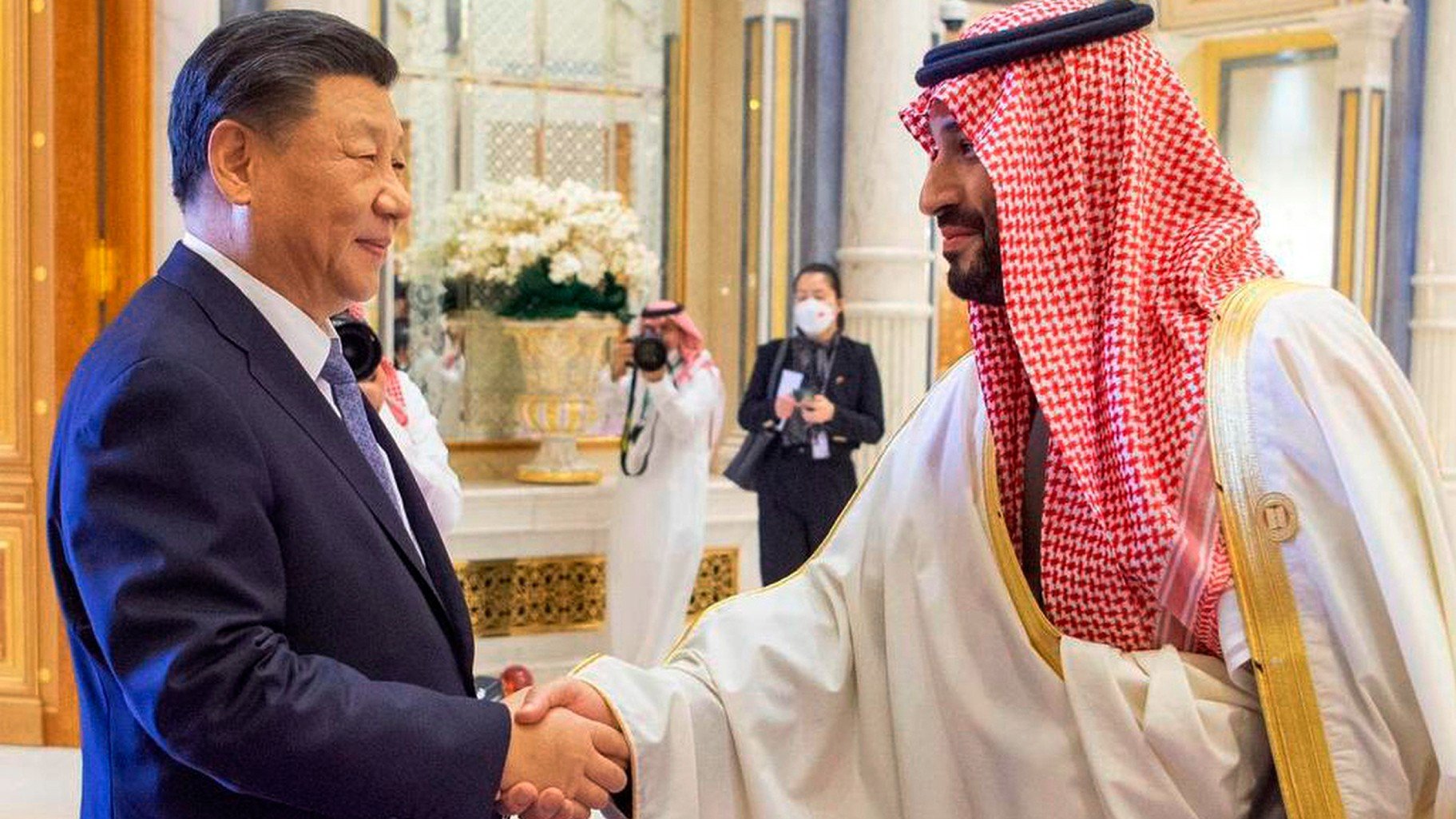 And then on 15 July came MBS’ infamous fist-bump meeting with US President Joe Biden in Jeddah. The next day at the GCC + 3 Summit, Biden urged to no avail an increase in oil production. It was a scenario that played out with French President Emmanuel Macron welcoming MBS to Paris later in July, again a first for a western leader post the killing of Khashoggi. Again the request was made and again it was rebuffed.

Ahead of the mid-terms, with Biden and his Democratic party looking in a sorry state, came yet another request and another denial. In October came the news that, under pressure from the Saudis, OPEC+ would cut production further. Salt in the wound.

Three powerful western leaders openly asked thrice and were thrice denied. MBS was each time empowered to say no ever more emphatically by what had come before. The crown prince secured a big boost in his campaign of image rehabilitation. And the West received nothing in return.

Utterly tone deaf to the new reality, in October the Democratic congressman Tom Malinowski co-sponsored a bill aimed at pulling troops and missile defence systems out of Saudi Arabia and the UAE.

In a letter accompanying the bill, Malinowski and his co-sponsors raged: “It is time for the United States to resume acting like the superpower in our relationship with our client states in the Gulf. They have made a choice and should live with the consequences. Our troops and military equipment are needed elsewhere.”

To threaten the withdrawal of troops and missile defence systems at a time when the Gulf is growing ever more uneasy about the Iran threat was strategically unsound. Especially as that anxiety is shared by America’s best regional friend, Israel.

To describe the Gulf countries as “client states” displayed an arrogance and myopia that played into the hands of the new breed of GCC leaders that has emerged over the past decade.

Mohammed bin Zayed, who had been the de facto leader of the UAE, became with the death of his brother in May the de jure leader of a state once praised as “Little Sparta” by America.

Neither he nor MBS, nor Qatar’s Emir Tamim bin Hamad Al Thani, nor their fellow GCC leaders in Kuwait, Bahrain and Oman see themselves as clients of the US. Rather, as America’s power wanes both regionally and globally, they are engaged with other partners while accepting that Washington will for the foreseeable future retain its role as a security guarantor.

With Putin’s stock as a skilful geopolitical player badly dented by his inept campaign in Ukraine, China’s President Xi Jinping, seeing far more clearly than Washington the direction in which the wind is blowing, has been busy doing deals.

In November, QatarEnergy signed a 27-year LNG deal with Sinopec. Long-term deals are the sine qua non for both suppliers and buyers, ensuring market stability for the former and price stability for the latter. As the boss of QatarEnergy, Saad al-Kaabi, put it: “This takes our relationship to new heights.”

In early December, the UAE energy and infrastructure minister, Suhail Al Mazrouei, described the relationship between his country and China as “a global model”, as Mohammed bin Zayed builds on a deal signed in 2019 that has made the UAE a key hub for China’s Belt and Road Initiative.

On 8 December, President Xi was welcomed fulsomely by MBS in Riyadh, with fighter jets pluming green smoke and a purple carpet rolled out. He and the crown prince signed a series of strategic deals, including one with Huawei, despite American concerns about the company and the security risks it poses for the US.

The World Cup proved a useful platform not just because it placed Qatar firmly on the world stage but also because – with the shock Saudi defeat of Argentina and Morocco’s tenacious journey to the semi-finals – it became a metaphor for MENA’s rising.

MBS met with Tamim in Doha to underline that the Gulf feud of 2017-2021 was now well and truly history. And Mohammed bin Zayed, very much the chief instigator of the feud, surprised observers by turning up as well. Not quite the three amigos, but they are all leaders in the ascendancy. As the tectonic shift plays out in 2023, they will continue to consolidate the bountiful gains they have been provided by the war in Ukraine.

Energy will remain the driving force, but diversification will continue, though MBS’s obsession with giga-projects like Neom, rather than bread-and-butter issues such as solving the flooding crises in Jeddah, may damage his domestic support.

With Biden in the White House, US relations with the Saudis will remain strained. Less so for the Emiratis, who have been highly successful at avoiding much of the opprobrium directed at Saudi Arabia over the war in Yemen, though both are deeply engaged and stand accused of numerous war crimes.

All three will be conscious of not allowing the rift with Washington to deepen very much further, as they will continue to need the security blanket that the world’s greatest military superpower still provides. However, the balancing act will be a tough one and one well worth watching.

Mohammed bin Zayed will use COP28 in Abu Dhabi to present a green agenda while ensuring that oil remains very much at the heart of Gulf energy strategy, a finesse that he can pull off, given that the UAE is a very efficient police state, adept at controlling protest and shaping propaganda.

Once again, he will play his hand to good effect quietly off stage while allowing centre stage to MBS, as the latter continues his rehabilitation exercise aided and abetted by pusillanimous western leaders.

China’s influence will grow as it uses its economic power to align itself ever closer to the Gulf, with whom it shares an authoritarian ideology. The Saudis and the Emiratis will continue their relentless repression of human rights, which western leaders will yet again ignore even as they grow more and more concerned about the Chinese presence in the Gulf.

In summary, 2022 will be remembered as the year of the shift; the year that the new breed of GCC leaders seized the opportunity that Putin’s war has given them and forced the West to see the Gulf through different eyes.

How big tech barons crush innovation—and how to fight back Maurice Stucke is professor for law at the University of Tennessee Cross-posted from the INET website In late 2017, the European Commission asked us to […]

Three years ago, while working in the European Parliament, I travelled from Brussels to Barcelona as part of a large delegation of a parliamentarians, experts, advisors and international observers to witness the October 1, 2017, […]