19 July was the hottest on record in the UK, temperatures reaching 40.3C in Coningsby, Lincolnshire. 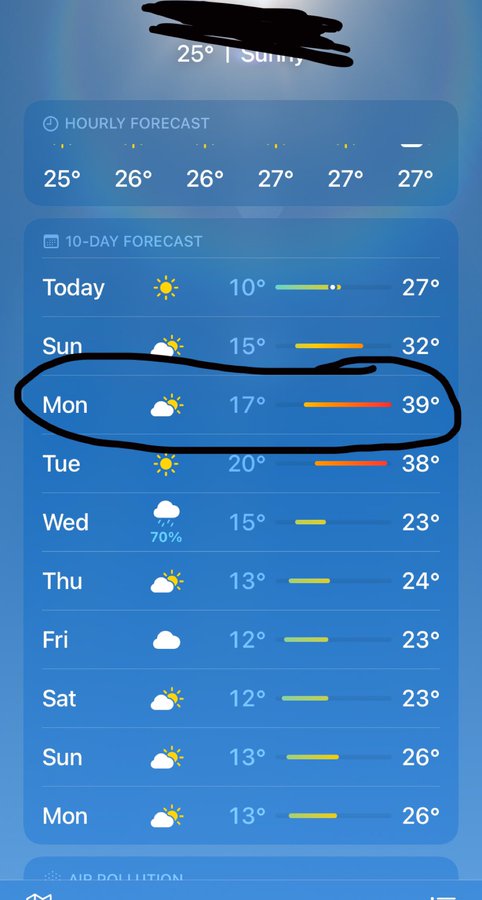 There’s no getting around it, the UK’s once equable climate is falling apart. We are now firmly on course for hothouse Britain and the signs are all around us. Just three years ago, the mercury hit 38.7C (101.7F) in Cambridge – then an all-time record. A year later, meteorologists at the UK Met Office mocked-up a weather forecast for 2050, showing 40C-plus temperatures across much of the UK.

But the speed of climate breakdown is such that this future is already upon us. On Monday, the Met Office’s first ever red extreme heat warning comes into force for much of England, as ferocious 40C-plus temperatures threaten to overwhelm ambulance services and A&E departments, and potentially bring about thousands of deaths.

And this is just the beginning. When our children are our age, they will yearn for a summer as “cool” as 2022, because long before the century’s end, 40C-plus heat will be nothing to write home about in the climate-mangled world they inherit.

In the decades ahead, summers are set to get ever hotter and last longer, overwhelming the other seasons, and reducing winter to a couple of dreary months punctuated by damaging storms and destructive floods. Blistering heat will be the default weather for July and August, when a combination of high temperatures and humidity will make sunbathing and working in the open extremely unpleasant and potentially deadly. Our poorly insulated homes will provide little respite as they are turned into unliveable heat-traps. Camping out in gardens and parks will become commonplace as baking nights make sleeping indoors impossible. Inevitably, increasing numbers of people will flee the cities to escape the heat-island effect that will transform them into unbearable saunas. A general migration northwards and uphill can be expected, as cooler conditions become a big property selling point.

But hothouse Britain is about far more than insufferable summer heat. Progressive climate breakdown will affect everyone and insinuate itself into every aspect of our lives. Transport and energy infrastructure will succumb repeatedly to the onslaught of extreme weather, making otherwise straightforward journeys increasingly problematical, and power outages a normal part of daily life.

Health and wellbeing services will buckle, as tens of thousands of the most vulnerable people struggle in the growing heat and humidity, cases of poisoning due to heat-related food and water contamination burgeon, and new diseases suited to the hotter conditions – including malaria and dengue fever – gain a foothold. An explosion in mental health problems is also foreseen as living conditions become ever more desperate for many, and the strain on individuals and families takes its toll.

A confluence of desiccating drought, torrential rains and battering hail, flooding and new pests that thrive in the heat, will take a massive toll on crops at a time when frequent harvest failures and climate wars will mean an erratic and unreliable supply from overseas. We have already seen price hikes and gaps on supermarket shelves as a consequence of the Ukraine conflict. Climate breakdown will bring far worse. One study predicts that by 2050 the world will need half as much food again, while crop yields could be down by as much as 30%. This is nothing less than a recipe for widespread hunger, social unrest and civil strife, and the UK is unlikely to be immune.

Heat and drought will be the signature conditions of hothouse Britain, but there will still be rain. In the summer, downpours fed by convective storms will be so heavy that little rain will penetrate the ground, most of it flowing over the surface to feed lethal and destructive flash floods. Autumn and winter will see frequent incursions of powerful, damaging, storms and so-called atmospheric “rivers”, bringing rains that last for days on end, overwhelming catchments and driving river flooding on a biblical scale.

Coastal communities will fight a losing battle as bigger and more frequent storm surges, increasingly powerful waves and a remorseless hike in sea level supercharge cliff erosion and permanently swamp low-lying terrain. Sea level is now rising by a centimetre every two years, which is more than double the rate for the period 1993-2002. Within 80 years it will certainly be more than a metre higher, and could have climbed by 2m or even more. This would bring the North Sea far inland, threatening especially low-lying communities such as the Lincolnshire towns of Boston and Spalding.

Alongside rapid emissions cuts, the inevitability of climate breakdown makes adaptation desperately urgent. Now should be the time for massive government investment in resilient infrastructure and the preservation of health and wellbeing – but there is little sign of this. Our housing stock remains totally unprepared for the new summer temperatures and flood plains are still being concreted over for new estates; meanwhile, transport and energy networks continue to be dangerously exposed to the vagaries of flood, wind and excessive heat. No plans exist, either, for a national water grid that could ease future drought conditions. The bottom line is that every decision – from local government upwards – needs to be made in light of building resilience to climate breakdown as well as slashing emissions. But this just isn’t happening.

If you are terrified by what you have read, then I have done what I set out to do. Too many of us still think that global heating will just mean that the world will get a bit warmer and that somehow we will muddle through. This is plain wrong. So be scared, but don’t let this feed inertia. Instead channel the emotion and use it to launch your contribution to tackling the climate emergency. Things are going to be dreadful, but – working together – we still have the time to stop a dangerous future becoming a cataclysmic one.

This is an excerpt from Catalonia Reborn: How Catalonia Took On the Corrupt Spanish State and the Legacy of Franco by Chris Bambery and George Kerevan, which will be published in June by Luath Press […]