BRAVE NEW EUROPE does not cover China or Asia, but this piece by Branko Milanovic contains a number of intriguing thoughts, so we decided to break our own rules. 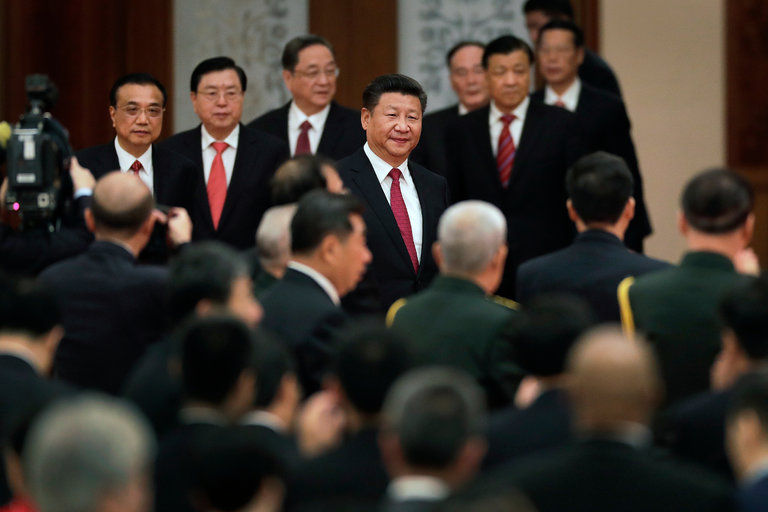 You think it is a contradiction in terms, a paradox. But you are wrong: we are used to think in pure categories while life is much more complex; and paradoxes do exist in real life. China is indeed a country of Hayekian communism.

Nowhere is, I think, wealth and material success more openly celebrated than in China. Perhaps it was stimulated by the 40th anniversary of the opening up which is this year, but more fundamentally, I think, it is stimulated by the most successful economic development in history. Rich entrepreneurs are celebrated in newspapers, television, conferences. Their wealth and rags-to-riches stories are held as examples for all. Ayn Rand would feel at home in this environment. So would Hayek: an incredible amount of energy and discovery was unleashed by the changes that transformed lives of 1.4 billion people, twice as many as the combined populations of the “old” EU-15 and the United States. People discovered economic information that was inaccessible or unknown before, organized in a Schumpeterian fashion new combinations of capital and labor, and created wealth on an almost unimaginable scale (certainly, unimaginable for anyone who looked at China in 1978).

At a large banquet in Beijing, we were presented first-hand stories of five Chinese capitalists who started from zero (zilch! nada! ) in the 1980s, and became dollar billionaires today. One spent years in countryside during the Cultural Revolution, another was put in prison for seven years for “speculation”, the third made his “apprentissage” of capitalism, as he candidly said, by cheating people in East Asia (“afterwards I learned that if I really wanted to become rich, I should not cheat; cheating is for losers”). Hayek would have listened to these stories, probably transfixed. And what news would he have loved better than to read in today’s Financial Times that the Marxist society at the Peking University was disbanded because of its support of striking workers in the Special Economic Zone of Shenzhen.

But there is one thing where Hayek went wrong. These incredible personal (and societal) successes were achieved under the rule of a single party, Communist Party of China. Celebration of wealth comes naturally to Marxists. Development, widespread education, gender equality, urbanization, and indeed faster growth than under capitalism, were the rationale, and sources of legitimacy, of communist revolutions as they took place in the less developed world. Lenin said so; Trotsky confirmed it when he canvassed for large-scale industrialization; Stalin implemented it: “We are fifty or a hundred years behind the advanced countries. We must make good this difference in ten years. Either we do it, or we shall be crushed”.

I remember, as a precocious high-school student in Yugoslavia, how I scanned the newspapers for the indicators of industrial growth. Since Yugoslavia was then among the fastest growing economies in the world, I was deeply disappointed when the monthly growth rate (annualized) would fall below ten percent. I thought ten percent was the normal growth rate of communist economies: why would you care to become communist if you would not grow faster than under capitalism?

So the celebration of growth—new roads, new super fast trains, new housing complexes, new well-lit avenues and orderly schools—comes naturally to communists. Not any less than to Hayekian entrepreneurs. (As an exercise in this, read Neruda’s beautiful memoirs Confeso Que He Vivido where he exudes enormous pleasure at seeing Soviet-built dams.) The difference though is that the Hayekinans celebrate private success which also helps society move forward; in communism, success too was supposed to be socialized.

But this did not happen. Collectivist efforts worked for a decade or two but eventually growth fizzled out and the efforts flagged. Cynicism reigned supreme. It was left to China and to Deng Xiaoping to stumble (in the immortal phrase of Adam Ferguson) on a combination where the rule of the communist party would be maintained but full freedom of action, and social encomium, would be given to individual capitalists. They would work, become rich, enrich many others in the process, but the reins of political power would firmly remain in the hands of the communist party. Capitalists will provide the engine and the fuel, but the party will hold the steering wheel.

Would things be ever better if the political power too was in the hands of capitalists? This is doubtful. They might have used it to recreate the Nanjing government of the 1930s, venal, weak and incompetent. They would not work hard but would use political power to maintain their economic privileges. It is one of the key problems of US capitalism today that the rich increasingly control the political process and thus skew economic incentives away from production and competition into creation and preservation of monopolies. Much worse would likely have happened in China. It is precisely because the political sphere was largely insulated from the economic sphere that capitalists could be safely kept busy with production, and at arm’s length (as far as possible because the party is exposed to growing corruption) from the politics.

How did China stumble on this combination? There may be many reasons including millennial tradition of being run by imperial bureaucracies, the historical alliance –even if it got unraveled—between the Communist patty and Sun Yat-sen’s KMT (an alliance the like of which never existed elsewhere in the communist world)—but one cannot but ask oneself, could it have happened elsewhere too? Perhaps. Lenin’s New Economic Policy was not much different from Chinese policies of the 1980s. But Lenin saw NEP as a temporary concession to capitalists—because he believed that socialism was more progressive and thus “scientifically” generated higher growth. Perhaps it is only the failures of the Great Leap Forward and the chaos of the Cultural Revolution that chastened Chinese leadership and convinced Deng and others that private initiative was more “progressive” than social planning and state-owned enterprises. Lenin could not have seen that. It was too early.

I also wondered what Stalin would have made of China. He probably would have been glad that his name is still enshrined in the official pantheon. (In a large bookstore in downtown Beijing, the first row of books are translations of Marxist classics: Marx himself, Engels, Lenin..and Stalin. Very few people look at them. The next rows that display books on wealth management, finance economics, stock market investments etc. are much more popular.) Stalin would have been impressed by Chinese growth; by the extensive power of the state and the country (for sure, no longer a country to which he could send his advisors to help it technologically), by the party’s ability to control in a very sophisticated and unobtrusive manner the population.

Stalin would have loved economic success and the military power that comes with it, but would have probably been shocked by private wealth. It is hard seeing him coexist with Jack Ma. Hayek’s reaction would have been the opposite: he would have been delighted that his claims about the spontaneous market order have been vindicated in a most emphatic fashion, but would have failed to understand that this was possible only under the rule of a communist party.

The affair around Julian Assange is of course an attack on freedom of the press, but it is much more, it is an attack on democracy and that by war criminals. Craig  Murray is a […]

Over 400 people were left injured on 10 August after clashes between protesters and police in Romania. Bianca Toma and Alexandru Damian explain the origins of the protests, which emerged in opposition to attempts by […]