“Smith failed to acknowledge the amorality of market forces…He failed to recognize that speculators and gamblers, thieves and fraudsters often flourished while people of industry, prudence, and circumspection were broken by forces outside their control” 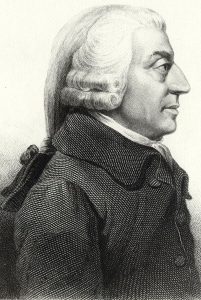 It is this deception which rouses and keeps in continual motion the industry of mankind. It is this which first prompted them to cultivate the ground, to build houses, to found cities and commonwealths, and to invent and improve all the sciences and arts, which ennoble and embellish human life; which have entirely changed the whole face of the globe, have turned the rude forests of nature into agreeable and fertile plains, and made the trackless and barren ocean a new fund of subsistence, and the great high road of communication to the different nations of the earth… It is to no purpose, that the proud and unfeeling landlord views his extensive fields, and without a thought for the wants of his brethren, in imagination consumes himself the whole harvest that grows upon them. The homely and vulgar proverb, that the eye is larger than the belly, never was more fully verified than with regard to him. The capacity of his stomach bears no proportion to the immensity of his desires, and will receive no more than that of the meanest peasant. The rest he is obliged to distribute among those, who prepare, in the nicest manner, that little which he himself makes use of, among those who fit up the palace in which this little is to be consumed, among those who provide and keep in order all the different baubles and trinkets, which are employed in the oeconomy of greatness; all of whom thus derive from his luxury and caprice, that share of the necessaries of life, which they would in vain have expected from his humanity or his justice. The produce of the soil maintains at all times nearly that number of inhabitants which it is capable of maintaining. The rich only select from the heap what is most precious and agreeable. They consume little more than the poor, and in spite of their natural selfishness and rapacity, though they mean only their own conveniency, though the sole end which they propose from the labours of all the thousands whom they employ, be the gratification of their own vain and insatiable desires, they divide with the poor the produce of all their improvements. They are led by an invisible hand to make nearly the same distribution of the necessaries of life, which would have been made, had the earth been divided into equal portions among all its inhabitants, and thus without intending it, without knowing it, advance the interest of the society, and afford means to the multiplication of the species. When Providence divided the earth among a few lordly masters, it neither forgot nor abandoned those who seemed to have been left out in the partition. These last too enjoy their share of all that it produces. In what constitutes the real happiness of human life, they are in no respect inferior to those who would seem so much above them. In ease of body and peace of mind, all the different ranks of life are nearly upon a level, and the beggar, who suns himself by the side of the highway, possesses that security which kings are fighting for. (emphasis mine)

Who has not read this long, and famous, paragraph in Smith’s “Theory of Moral Sentiments”, and been left absolutely speechless? Not only because it is the first (of only three) mentions of the invisible hand, but because after the most eloquent critique and even ridicule piled upon the rich landlords, it ends with a Panglossian conclusion that everything, in this world of inequity, is actually done in the best possible manner. Who, but the most stone-hearted writer, would seriously aspire to defend a distribution of whose injustice he is so aware and critical, and to do this by using the threadbare excuse that the rich really overestimate the worth of their wealth and comforts, and that the poor, “sun[ing]…by the side of the highway” may be as happy as the rich? It seems so presumptuous a statement that our facilities of reacting to it appear, for a moment, to have been stunted.

David Wootton in a new book “Power, Pleasure and Profit: Insatiable Appetites from Machiavelli to Madison“ opens his chapter dedicated to Smith with this long quote. He relates it to the discussion (of which I wrote here) about the two Adam Smiths, the one of the TMS (a moralist – Theory of Moral Sentiments) and another of the WoN (a realist – Wealth of Nations). Wootton argues that Smith’s introduction of self-delusion among the rich is crucial to downgrade the moral significance of acquisition of wealth. Smith needs people to believe that wealth will give them happiness so that they work hard, take risks, and invest, and thus make us all better off as the society gets wealthier. But he also needs self-delusion to make sure that there is equality in the space of happiness, in other words that the rich never attain the happiness after which they strive.

The self-delusion is thus the key link that ensures that there is no trade-off between growth and equity. Self-delusion acts as a deflator of all actual wealth: yes, I have a big house, but if I use a delusion deflator of 100, the happiness that it gives me makes it feel like a hut. The social order which produces such inequitable outcomes in the space of actual incomes and wealth, is not impugned: actually existing inequality is immaterial.

But did not Smith really delude himself about that delusion? Wootton writes: “Thus Smith failed to acknowledge the amorality of market forces…He failed to recognize that speculators and gamblers, thieves and fraudsters often flourished while people of industry, prudence, and circumspection were broken by forces outside their control” (p. 279).

Had Smith accepted that amoral and often immoral ways in which wealth is acquired (mentioned in innumerable examples in his two books) can lead to greater happiness of those who engage in such acts, he would have validated the rationality of such behavior. A commercial society could be seen not only as producing a visible hierarchy in which fraudsters are on the top but allowing them to live happier lives than the rest. How could then such a society be morally justified? Religion came with the answer that such riches are ephemeral: the real riches lie beyond. For Smith, the delusion does the job: it comes in to erase the importance of undeserved gains. Adam Smith can have his cake and eat it.

I do not think that anyone would have defended this point of view today because it relies on something that is manifestly false: the argument that higher income or wealth do not (at a given point in time and in a given society) lead to greater happiness. This opposite is true empirically (as the studies on happiness show), and it is revealed in our daily behavior through permanent striving for more. Thus the argument which denies the relevance of massive inequality in the distribution of “earthy” goods by minimizing their importance—or by claiming that in the end, we would all be dead—is indeed one of the most brazenly dishonest arguments. For if the authors of this kind of arguments seriously believed them, they should have nothing against the poor and the rich changing places. But they have seldom proposed to proceed to such a swap.

Philip Cunliffe – Beyond the Full Brexit: For Democratic Self-Determination and Internationalism for the Whole of Europe

Most economists and journalists don’t understand that when companies save rather than borrow and make investments, the state must run a deficit – a lesson that surplus-crazy Austrians and Germans have not learned, yet. Heiner […]