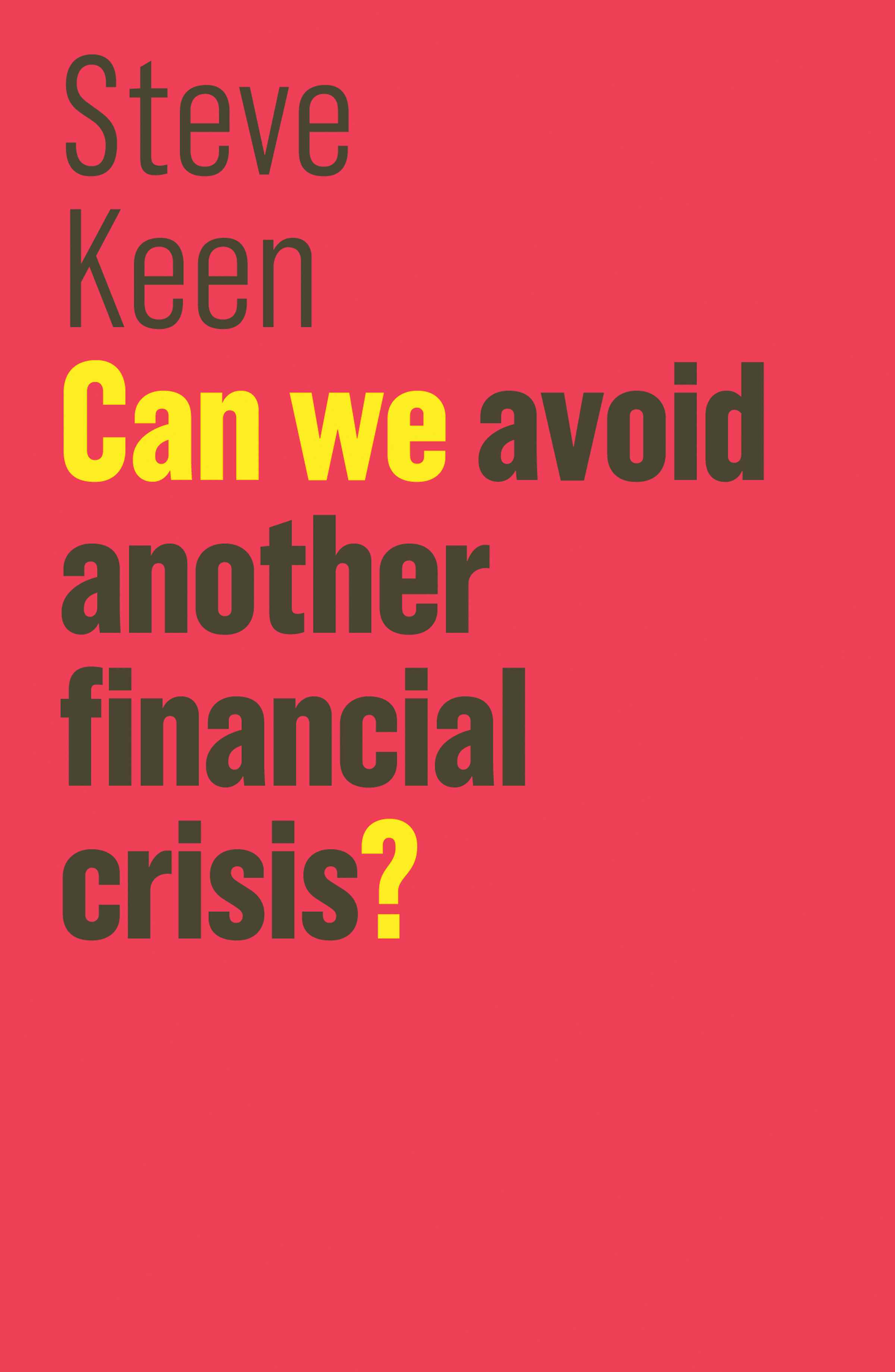 Steve Keen has a credential that few macro-economists can boast of: He foresaw the coming of the financial crash of 2007. In his latest book, “Can we avoid another financial crisis?” Keen argues that predominant neo-classical economics is obdurately ignoring the causes of the events of ten years ago, setting the scene for the next financial disaster.

Following two initial theoretical, but perspicuous chapters concerning Hyman Minsky and his Financial Instability Hypothesis (the inevitability of crisis in free-market capitalism) and the shortcomings of neoclassical economics, especially with regard to the Great Financial Crisis, Keen’s book takes off.

The key to his analysis is the relationship of private debt to Gross Domestic Product. In December 2005 he had discovered that in his native Australia private debt was growing exponentially in relationship to GDP. Such a development, explains Keen, inevitably results in a major recession. As he sought a comparison, in this case the USA, he discovered a similarly acute situation. Keen recognised that a global economic crisis was approaching.

Following the Great Economic Recession the Queen of Great Britain aptly asked a group of academics of the prestigious London School of Economics with regard to the most profound global financial crisis since the Great Depression: “Why did nobody notice it coming?” Keen, like a number of critical macro-economists, blames the prevalent neoclassical economics driven by a neoliberal ideology, which neither wanted to see what was coming, nor could it, as it “paid no attention to private debt nor disequilibrium dynamics”. Keen points out, that at the same time he was making his calculations the then Federal Reserve Chairman, Alan Greenspan, was testifying to Congress claiming there was no nationwide property bubble, but merely “signs of froth in some local markets.”

Keen identifies private credit as the cause of the financial cycle of booms and busts of the global economy. While a prolonged increase in private debt can give the appearance of prosperity, a crash is sure to follow. The resulting collapse of demand for such debt can see the transformation of nations into what Keen terms “economic zombies”, as the ensuing debt deflation reduces demand, investment, and growth. He illustrates this with Japan’s anaemic economy following the collapse of its asset price bubble at the beginning of the 1990’s, after which the rate of personal debt has remained low. Keen sees this phenomenon repeated in a number of economies including the USA, the UK, and Southern Europe. This stagnation of personal debt is in Keen’s opinion the true cause behind Larry Summer’s “secular stagnation”.

Of course, as Keen points out, governments can delay a crash by providing private lenders with more cash and credit: “They face the junkie’s dilemma, a choice between going ‘cold turkey’ now, or continuing to shoot up on credit and experience a bigger bust later.”

Australia’s Treasury Secretary, whose national economy was in a similar predicament as the United States, adopted a radical expansionary policy of “Go hard, go early and go households” following the global economic meltdown. Combined with the China induced investment boom the debt trajectory continued. Australia has borrowed its way out of the Great Financial Crisis according to Keen, but the future crash will be that much more severe.

Looking back Keen traces the rapid increase of debt to GDP in Britain due to deregulation during the Thatcher era. In the century from 1880 to 1980 it had remained approximately at the same level, only to increase threefold just before the Great Economic Recession. This benefitted the City of London, but has been detrimental of much of UK society.

Keen’s final chapter, “A Cynic’s Conclusion”, does not quite live up to its promise. Instead Keen considers possible solutions. He eschews debt forgiveness and helicopter money in favour of a hybrid, a “Modern Debt Jubilee”, “a direct injection of money into all private bank accounts, but requires that its first use is to pay down debt.” This includes the caveat that the whole process of reckless bank lending creating new asset bubbles should be prevented. He also demands that debt and its relation to GDP be an integral part of mainstream economics.

When I purchased the book, it was with a certain amount of trepidation. I had attended a lecture by Keen in Berlin and it was pure maths. The book is the opposite: lively prose punctuated with Keen’s humour, written with the non-economist in mind. It is something every author should strive for despite the obstensibly daunting material: A good read.

Can we avoid another financial crisis? By Steve Keen

Steve Keen: Ricardo’s Vice and the Virtues of Industrial Diversity

Debunking a typical economist error of composition: specialization may be good for you, but not for us. Complex diversity wins. Read here

Steve Keen – This is not a Natural Disaster. It is Man Made

As we enter 2020 this is what lies ahead for all of us: One climate disaster after the other. Steve Keen on the fires in his native Australia. Do remember, the Australians have voted in […]

How has the Covid crisis increased inequality?