That the euro is damaging the economy of most of Europe to the advantage of a few member states, especially EU hegemon Germany, is no secret. The question is when the first nation will leave it, just as Britain has left the EU.

Cross-posted from the Spanish article in el Comun

The Euro must be scrapped and with it Spain should leave the European Union. I shall now set out what I believe to be the best way for Spain to abandon the Euro. Furthermore, I believe that the concrete measures set out should be adopted by an electoral platform under the name ‘Exit from the Euro’.

The design of the Euro does not allow for the necessary counter-cyclical policies that would end the current economic crisis. The main counter-cyclical policy that the Euro does not allow for is the capacity of monetarily sovereign states to incur all the public deficits necessary to achieve high levels of employment. This limitation is imposed under the false premises that public deficits are necessarily inflationary when they generate levels of unemployment close to full employment and that public deficits, like private deficits, are not always sustainable and can lead to the involuntary suspension of payments by the state. Both premises are false. Job guarantees based on employment buffer stocks are a means of ensuring full employment without inflation. Moreover, public deficits and state debt are always sustainable if the state spends and borrows in its own currency, since a monetarily sovereign state cannot be left without its own money.

However, the exit from the Euro must be done in the right manner, as an exit from the Euro through wrong policies could make the situation even worse. To understand the correct way out of the Euro in a country like Spain, it is convenient to turn to Warren Mosler, specifically to the talk he gave in Madrid on September 15, 2015 on the occasion of the presentation of his book ‘The Seven Innocent Capital Frauds of Economic Policy’. At the moment 1:04:44 of that talk he presented the following slide: 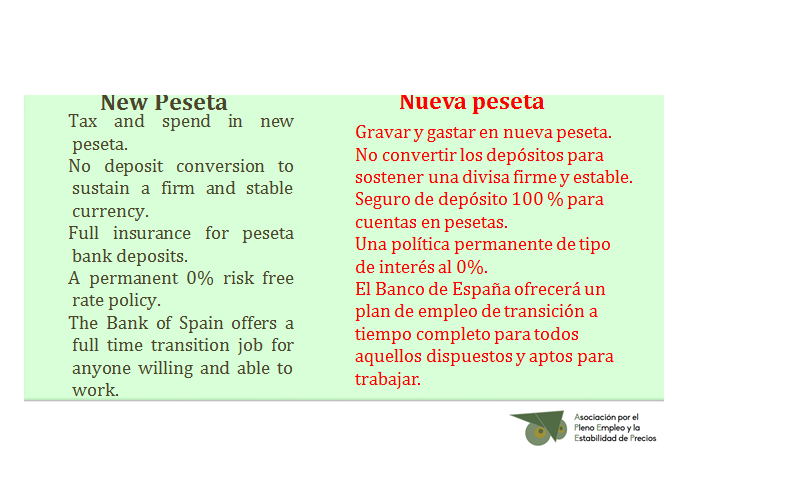 Here are five measures that would allow for a smooth transition from the Euro to monetary sovereignty:

1. The state should tax and spend in the new national currency (I personally don’t like the term New Peseta. I also don’t like the term Neopeseta). To denominate the new Spanish currency I would prefer the term Spanish Peso or Duro). Since taxes give value to money, the state should only spend and tax in national currency. This ensures the demand for that currency. It is not necessary to prohibit commercial transactions in Euros, both currencies can coexist, but when paying taxes and making payments the state will only use its own currency.

3. 100% deposit insurance for bank accounts in the new currency: the state would guarantee that savers in the new currency would get their deposits back in case of bankruptcy of the financial institutions where they have these deposits. In this way the consequences of bad decisions taken by banks would be borne by the banks themselves and their shareholders, not by the savers who have their savings in them.

4. Adoption of a permanent 0% interest rate policy: the state needs neither to collect taxes nor to issue debt securities to finance its current expenditure, as it has at its disposal all the national currency it needs. Therefore, there is no reason to finance its expenditure by issuing debt securities. Neo-classical attempts to use interest rates as tools to control inflation have proven to be very inefficient and unreliable, turning high interest rate policies into mere welfare systems for the upper classes. The right way to control inflation is through fiscal policy and through a job guarantee based on employment buffer stocks.

5. Implementation of guaranteed work: the recovery of the national currency would make it possible to hire all the necessary workers on a permanent basis in the public sector and also to implement job guarantees based on employment buffer stocks. This would guarantee full permanent employment by law. These schemes are not only compatible with currency and price stability, but are also a guarantee of such stability.

These five measures would enable Spain to make the best possible transition from the euro to monetary sovereignty and full employment without inflation. Of course, this does not mean that the transition would be free of complications. The European Union will do everything possible to punish a Spain that chose to recover its sovereignty and decided to abandon the Euro (the case of Brexit shows this), but in no way would it worsen the current dire economic situation and the ensuing economic recovery would soon be reflected in a great increase in the general well-being of the population.

In the case of Spain, the reintroduction of floating exchange rates would compensate for the increase in customs tariffs when trading with Europe. Likewise, a priority of the Spanish government should be to strengthen trade ties with countries outside the EU. In reality, nothing produced in the EU is not produced in a cheaper and better fashion outside the EU. However, Germany and the other net exporters of the union use the EU to avoid competition with other economies. Spain should approach these other economies and especially the Latin American countries when establishing trade agreements. Likewise, an aspiration that I believe would be possible and desirable is that the current term BRICS (English acronym for Brazil, Russia, India, China and South Africa) would incorporate a second final S corresponding to Spain, so that the term BRICSS would be created.

According to the 2019 Eurobarometer, 31% of the Spanish population does not consider EU membership to be positive. The EU average in this respect is 39 %. However, in 2013 this figure of dissatisfaction with EU membership reached 53% (3% higher than the EU average at that time). This indicates that an election platform under the name ‘Exit from the Euro’ would have a broad social base of support. The platform should be composed of all those parties, citizens’ associations, trade unions, and individuals who support the recovery of monetary sovereignty through the five measures listed above. From the diversity of ideological positions, ‘Exit from the Euro’ should carry out a pedagogical task within society to explain and expand its proposal. This would entail submitting the five steps for the exit from the Euro to social debate. I am convinced that if this pedagogical work were done in the right way, that is, through the involvement and coordination of civil society, a social majority could be created that would lead Spain to a referendum similar to the one held in Great Britain in which the option of abandoning the Euro and the EU would win. Once this objective is achieved, the constituents of the electoral platform should consider the possibility of each following his or her own path in a sovereign Spain, or if on the contrary it would be possible to create one or several new electoral platforms in which to continue the collaboration initiated in ‘Exit from the Euro’.

In my opinion, this perspective would be mainly beneficial for the creation of a new leftist political project that would bring together the sectors that due to their opposition to the Euro, the EU, and the neoclassical economic policy being followed by the current government of the social democratic PSOE and centre-left United Podemos are currently marginalized in the traditional leftist parties.

Vickie Cooper and David Whyte: The Violence of Austerity

The authors examine the secret agenda behind austerity in Britain and the horrendous consequences it is having for much of the populace, especially for the vulnerable. Vickie Cooper is Lecturer in Social Policy and Criminology […]

Both Greece and Ireland suffered substantially during the Eurozone crisis, but the two countries’ treatment by the ‘Troika’ of the IMF, European Central Bank and European Commission was strikingly different. Drawing on new research, they […]