Hundreds of thousands marched through the streets of Barcelona on 18 November in defence of democracy and their right to independence. 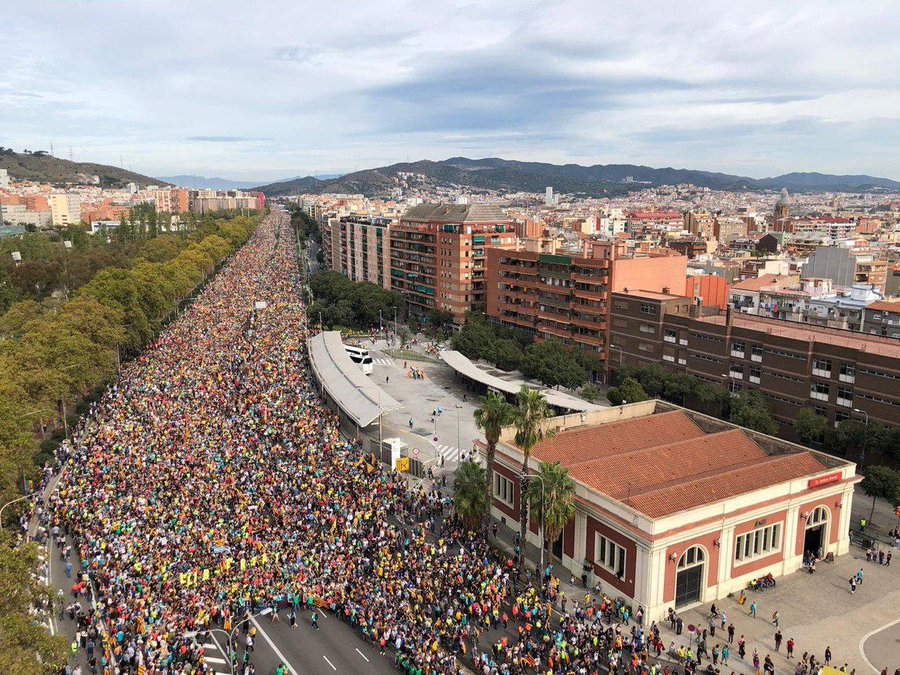 Today much of Catalonia ground to a halt as the country saw a general strike, the second day of a students strike, five mass marches from five cities converging on Barcelona where a huge demonstration will take place this evening and main roads and motorways blocked by protesters.

This is the fourth day of a wave of protest in response to the Spanish Supreme Court handing out prison sentences totalling over 100 years to nine Catalan civic and political leaders charged with sedition in relation to the 1 October 2017 independence referendum.

Electricity use across the nation has fallen indicating its impact. Catalonia’s biggest workplace, the SEAT car factory, told its 8000 workers to stay at home, because the company says they “have to be able to guarantee that our workers and materials can arrive to the plant.” The Vueling airline has cancelled at least 36 flights, 18 arrivals and 18 departures from Barcelona airport. Many smaller businesses, shops and restaurants, have shut in solidarity. Dockers from Barcelona’s port joined the strike and blockaded Via Laietana in the city centre, where the Spanish National Police station is (it was a torture centre under the Franco dictatorship).

The strike was called by the pro-independence trade unions Intersindical-CSC and IAC before the Spanish Supreme Court handed down the prison sentences in support of their demands which include a higher minimum wage and measures to ensure gender equality.

The two unions have not specifically raised the jailing’s – Spanish law prohibits strikes for political objectives – but both support independence arguing it would benefit workers’ rights.

The Catalan components of the two biggest, Spanish wide, union federations, the CCOO and UGT, are not supporting the stoppage.

In truth the stoppage is more like a South African style stay-away rather than a traditional general strike with pro-independence activists blocking roads to stop people working and with 2000 activists shutting down entry to Barcelona’s Sagrada Família. The actual strike will be strongest in the public sector, notably education, though emergency services are guaranteed.

But there can be no doubting the support for the strike and the protests.

The five marches into Barcelona from five key towns, which set off three days ago, are entering the Catalan capital where they will be joined by many more. There are also separate demonstrations taking place in other towns and cities. They have been organised by Omnium, the mass membership Catalan cultural organisation, whose President, Jordi Cuixart, was jailed for nine years, and by the largest pro-independence civic organisation, the Catalan National Assembly (ANC), whose former President, Jordi Sanchez, was also jailed for nine years.

Early this morning protesters blockaded several roads including the country’s two main motor ways: AP-7 at La Jonquera, near the French border and AP-2 the route to Madrid at Tarrés.

On a second day of a strike by university, college and school students at least 25,000 took to the streets of Barcelona marching from Plaça Universitat to Plaça Sant Jaume, where the Catalan government and Barcelona city council are located.  Among the slogans shouted were “independence”, “release political prisoners” and “I would imprison the monarchy”.

Xenia Cabeza, 18, said she was protesting ‘because they don’t let us vote in a referendum’ on secession. She carried a sign that read ‘You can’t imprison an entire people’.

In Girona over 4000 students began their demonstration outside building of the Spanish government’s delegation shouting that they would take down the Spanish flag.

In Lleida 700 students marched and in Tarragona 600 before they blocked the A-7 motorway.

The scale of the protests is rocking the Spanish state which has sent in extra security police who have been quick to use their batons and rubber bullets. Much of the media coverage has focused on a small minority of protesters who reacted by hurling back missiles and setting fire to refuse bins, but their numbers are dwarfed by those taking part in non-violent protests.

Non-violence is crucial to the Catalan independence movement whose leaders, including those in jail, and activists, are aware that the Spanish government and the Supreme Court judges want to paint a picture of a movement intent on a violent secession.

Meanwhile Spain is trying to extradite the Catalan President, Carles Puidgemont, once more. Puidgemont is in exile. By its actions the Spanish state, which is so determined to maintain its unity, is driving greater numbers of Catalans towards the exit door.

Richard Murphy – Guess who won from the Global Financial Crisis?

We have one tax scandal after the other. Not only do things not improve, they get worse. Richard Murphy is Professor of Practice in International Political Economy, City University of London. He campaigns on issues […]

Juan Laborda – In the Face of Recession, a Green New Deal for Everyone!

Why don’t we start with a work guarantee to usher in a genuine Green New Deal that saves the planet? An inclusive Green New Deal for all by definition entails massive public investment. Juan Laborda […]