As its authority in Brussels is being threatened, Germany is consolidating its control over the EU. Three of the EU´s four leading civil servants are now German. Angela Merkel has declared that a German, the lacklustre Manfred Weber, is to be made the new President of the EU Commission. In the midst of this European Ombudsman issued  a scathing reportof how the appointment of Martin Selmayr as the most powerful EU civil servant, Secretary-General, on 21 February 2018 was a stitch up (Read here). There will of course be no consequences – but the EU political elite is known for this.

On 4 September 2018, the European Ombudsman ruled that the appointment process of  Martin Selmayr had suffered from several instances of maladministration and recommended the “Commission should develop new procedure for appointing its Secretary-General”. 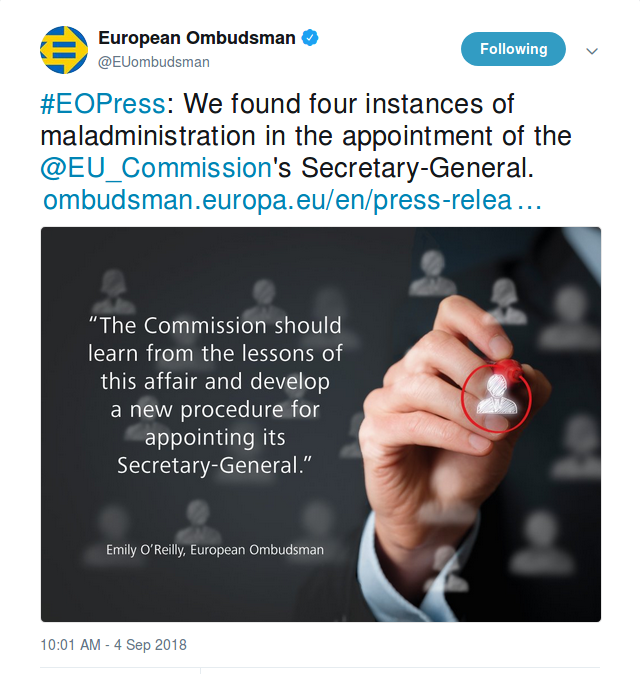 The appointment of Martin Selmayr as new Secretary-General of the European Commission took almost everybody by surprise. Only a handful of Commissioners were apparently aware before the fact, including of course Jean-Claude Juncker, who announced the promotion of his then chef de cabinet on 21 February 2018, making Selmayr the head of some 33,000 commission staff.

Jean Quatremer, EU correspondent for French newspaper Libération, soon revealed details about the dubious appointment procedure. Selmayr had first been named deputy Secretary-General, a position in which he remained literally just a few minutes – long enough to give him the required civil-service grade for further promotion. He was then swiftly, without interview or public announcement, handed the top post following Alexander Italianer’s resignation. Quatremer describes it as “a brilliantly executed coup that has handed this 47-year-old German bureaucrat near-total control of the EU machine”.

The appointment sparked uproar among Brussels journalists as the Commission’s spokespeople refused to answer questions and stubbornly insisted that there was no problem with the way Selmayr had been appointed.

Further digging into this lightning-speed procedure has in the meantime revealed more baffling details. Quatremer’s research, based on undisclosed sources, revealed what could be the most shocking detail yet: the cabinet of Commissioners may have withheld criticism of or even opposition to Selmayr’s promotion as the man himself had flagged the possibility of providing them with increased post-employment benefits, from in-house offices at the Commission headquarters to a personal driver. In addition, the prospect of extended as well as heightened transitional allowances was raised by him.

If true, this last aspect is particularly outrageous. Transitional allowances are official payments to former EU commissioners following their exit from the institutions. They are meant, among other purposes, to reduce the financial incentive of potentially conflict of interest-laden private sector roles for ex-officials and to thereby keep them from accepting ethically dubious employment offers.

Considering the recent revolving door scandals and the fast approaching 2019 EU elections which will see many of the current Commissioners leaving office, it is urgent to reinforce transitional allowances as an effective tool for preventing conflicts of interest. But its getting caught up in the scandal surrounding Selmayr’s appointment has rendered the issue toxic and any changes to the allowances now seem unlikely. This is precisely what happens when a tool meant to fight conflicts of interest is used for political leverage to gain favours.

And the fallout of the appointment didn’t end there. Soon, Members of the European Parliament expressed their horror, not least because Selmayr is a political figure aligned with the German Christian Democrats, and not a civil servant. With his appointment virtually all top positions in the EU institutions are now held by conservative politicians linked to the right-leaning EPP group.

Selmayr has also been a controversial choice due to the aggressive and often authoritarian style in which he used to execute his responsibilities as Juncker’s chief of staff, a behaviour that earned him the nickname the ‘Beast of the Berlaymont’. As a consequence of his leadership style, media report that his “peers in power say they cannot trust him. Subordinates say they fear him. Already, one Commission vice president and several high-level aides have quit, decrying his authoritarian control of the Commission, which he has remade unapologetically, in Juncker’s name, as a top-down institution.”

Earlier last week, the uproar around the Selmayrgate scandal deepened when Commissioner Oettinger was grilled in Parliament by angry MEPs. Oettinger appalled the parliamentarians by simply denying all criticism and claiming that the Commission had done “everything by the book”.

MEPs were not willing to accept this evasion of the issue, with ALDE’s Sophie in ‘t Veld saying how she was left “completely speechless at the scene of 28 powerful politicians, selected for the political leadership of this continent, but led by the nose by a civil servant”, adding that “Selmayrgate destroys all credibility of the EU as a champion of integrity and transparency in public administration”. Relating the scandal to the already low public trust in the European Union, Ms in ‘t Veld summarised the scandal as “devastating” and said that “the Commisison will have to chose what is more important: the career of Mr Selmayr or the credibility of the European Union.”

Speaking for the Greens/EFA, Philippe Lambert highlighted that “Mr Selmayr is a party man above all” and that he “is moving forward with authoritarian centralisation”. Dennis de Jong for the GUE/NGL group, like others during and after the debate, reminded everyone of the fate of the Santer Commission, which in 1999 resigned en-masse following an internal corruption scandal.

Oettinger, as the Commissioner responsible for Budget and Human Resources, should have played a key role in the hiring of a new senior civil servant like the Secretary-General but, according to media reports, was completely side-stepped during Selmayr’s recruitment. During the European Parliament debate he was then mostly unable to answer MEPs’ hard-hitting questions and in his closing remarks largely failed to address the many concerns that had been raised. Instead, he chose to repeat that there was nothing wrong with Selmayr’s appointment. At Corporate Europe Observatory, this caused us to recall our concerns regarding Oettinger’s own fitness for the job. (More information about the Parliament debate here.)

In a step further highlighting the severity of the case, the Parliament’s committee for budgetary control last week also unanimously approved a probe into Selmayr’s appointment and the Commission’s integrity more generally. Then yesterday, MEPs agreed to further quiz Commissioner Oettinger and submit questions about the appointment directly to President Juncker. The Parliament’s Conference of Presidents is also to draft a resolution on the issue to be voted on alongside the budget discharge, again highlighting MEPs’ power to postpone the Commission’s annual budget discharge until there is clarity over the appointment.

The importance of the Secretary-General role

What is clear is how much is at stake with this appointment. The Secretary-General role to which Selmayr has been appointed is an extremely powerful one within the Commission apparatus. This became very clear during the long term of previous Secretary-General Catherine Day, who filled the position from 2005 until 2015. Her mandates were marked (and in our view marred) by several deep and shocking interventions in the EU decision-making process on behalf of corporate lobby interests.

A profile of Day’s lists some of her interventions, which blocked public interest regulations:

In addition to these cases, our own research, as well as a study by the Pesticide Action Network, has shown how then Secretary-General Day was a key actor in delaying the adoption of criteria to identify endocrine disrupting chemicals following a massive corporate lobbying campaign.

It is no surprise then that the flawed appointment of ‘Beast of the Berlaymont’ Selmayr is a cause for concern. Especially with a view to climate and energy policy, Selmayr already has a questionable track record, as German Süddeutsche Zeitung reported: Selmayr might have been a crucial actor in the Commission’s watering down of EU emission targets following a telephone call with the head of German car lobby group VDA.

And, of course, as highest ranking civil servant in the Commission, the Secretary-General is responsible for administrative issues, including for complaints relating to revolving doors moves and conflicts of interest issues. So if Selmayr stays in the role, it will be him assessing ALTER-EU’s complaint on the recent lobby meeting between current Commission Vice-President Katainen and former President and now Goldman Sachs employee Barroso. What a turn of events, considering that Selmayer himself went through the revolving door. Once a lobbyist for powerful German media organisation Bertelsmann, he went on to become spokesperson for former Information Society and Media Commissioner Vivian Reding. Can someone with this professional history really be considered best suited for monitoring revolving door issues at the Commission?

Right now, Selmayrgate is raising big questions about the integrity of this Commission. And it’s feeding public mistrust. After all that has so far been revealed about the appointment process, it should be clear that Selmayr must resign. If he chooses to stay, this scandal will escalate further. In a pre-election year like the current one, neglecting to clear up such a massive scandal may prove fatal not only for the sitting Commission but also for electoral turnout and choices in 2019.

Conter – The Meaning of the New Recession: An Interview with Michael Roberts

Economist Michael Roberts argues we’ve not seen the worst of the present economic crisis by a long way. We are heading for deeper slumps and intensifying inter-state conflict. Michael Roberts is an Economist in the […]

The promise of green growth turns out to have been based more on wishful thinking than on evidence. In the years since the Rio conference, three major empirical studies have arrived at the same rather […]