Industry lobbyists who want to continue monetising users’ online data are battling against new ePrivacy regulations, targeting EU member states in the Council. And some member state governments are only too happy to help.

Adapted from an article at Corporate Europe Observatory

The battle against ePrivacy – that is over the confidentiality of your online communications – is being waged fiercely by corporate lobbyists. Recent news about the Facebook/ Cambridge Analytica revelations should have spurred on EU institutions to prioritise the online data privacy of citizens, but the corporate lobby (including the publishing and digital advertising industries, social media corporations such as Facebook, and telecommunications companies) is actively opposing this. The aggressive language which characterised some of the corporate lobbying directed at the European Parliament in the Autumn of 2017 led one Parliamentary insider to label the ePrivacy dossier as “one of the worst lobby campaigns I have ever seen”.

Now the same lobby bandwagon is targetting the 28 EU member states (EU28) represented in the Council of the European Union. And officials have reported a massive corporate lobby effort – with some member states apparently only too happy to give in.

In a series of interviews conducted by Corporate Europe Observatory, member state officials have confirmed the scale of lobbying on ePrivacy. One official said that “99 per cent of the lobbying” encountered on the ePrivacy file had been from industry, and that the lobbyists they had met were almost entirely opposed to the file. Another said that after several years in Brussels, they could not recall a proposal that had attracted this much lobbying, and that of the more than 40 meetings held, almost all had been with industry. A third agreed, saying the lobbying was the highest they had ever seen, despite having previously handled many similarly “difficult files”.

Publishers and advertisers lead the charge

The publishers’ lobby (newspaper and magazine publishers) and the digital advertising lobby (those who sell on-line tracking-based advertising) have been some of the most active and vociferous industry lobbies in the ePrivacy debate. Their shared business model of monetising people’s data to generate advertising revenue has long been criticised, but industry has failed to seriously engage with such concerns. Now they are on the defensive.

‘The biggest possible evil’ and ‘the end of digital economy’ are just two of the recent doom-laden headlines in German media industry outlet Horizont, which has repeatedly predicted calamity on ePrivacy. The publishing industry has urged German officials to take action: “It is now up to Berlin to set crystal clear signs in Brussels, and I’m sure that sensible data protection can then also become a real competitive advantage”. Meanwhile, another trade association has warned that major sites such as Spiegel Online or Bild.de would be threatened, and likened ePrivacy to a “civic coup”. At a German advertising industry conference, attendees demonstrated against the ePrivacy proposal accompanied by an image of a nuclear mushroom cloud!

And industry has received support from the German Government which commissioned an economic impact assessment of the EU’s proposed ePrivacy regulation, specifically regarding expected effects on the advertising industry. Published in November 2017, the study found that in Germany the total digital advertising budget is expected to shrink by about one third in the short term once the ePrivacy regulation comes into force. A separate industry-funded study came to a similar conclusion. Both studies, however, only considered voices from the affected industry sectors; a clear bias. After all, turkeys do not vote for Christmas.

The French Government, known to be sympathetic to industry concerns, also commissioned a report on the impact of ePrivacy which garnered the support of industry. Trade associations representing content editors and digital marketers jointly noted that the analysis is “in line with the position expressed by professionals in the sector”, although it was critiqued by others.

France was one of many EU28 governments which received an open letter from 50 plus publishers and advertisers in March 2018 which re-hashed familiar arguments that ePrivacy would threaten online advertising and other sectors, and “undermine the essential role of press and media in European democratic life”. Meanwhile, various lobbies representing media, advertisers, and publishers have produced draft amendments to Council proposals.

What impact has all this public activity and behind-the-scenes lobbying had? The latest Council  proposal indicates industry has succeeded with the inclusion of their demands on privacy settings and tracking walls (where users lose access to a website if they do not consent to be tracked). 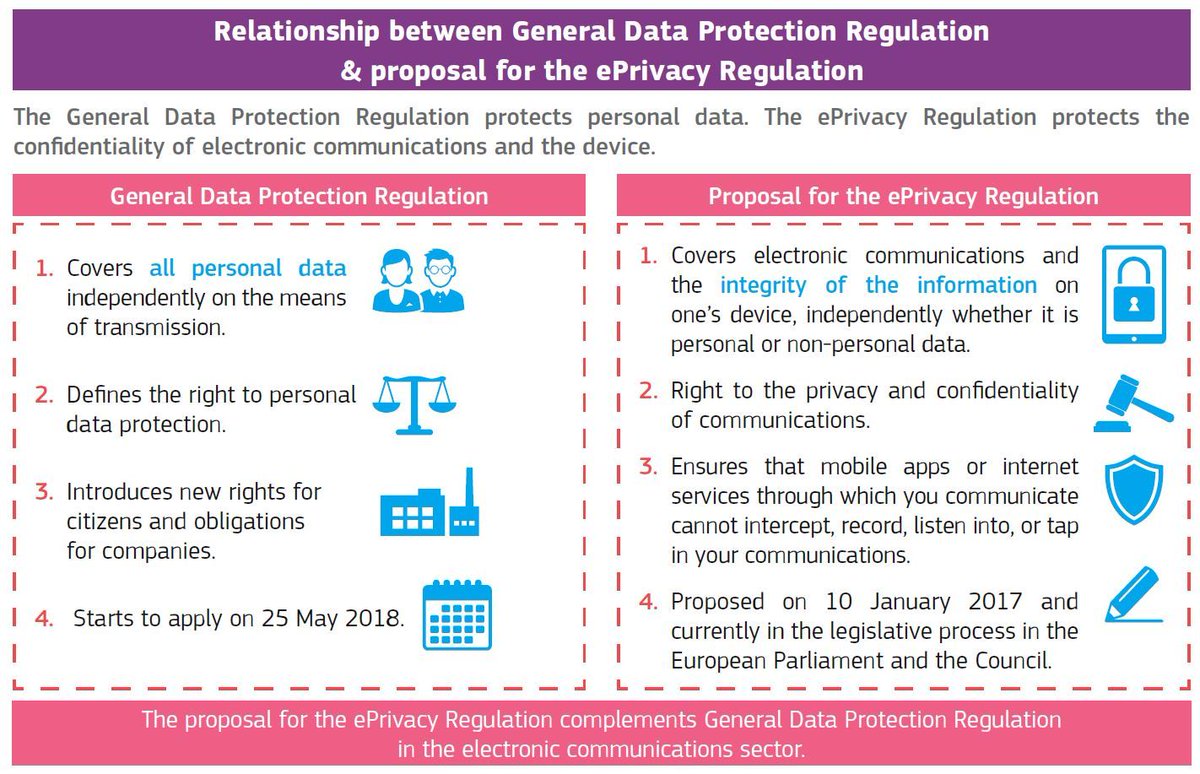 The telecommunications lobby has also been active on ePrivacy. The European Telecommunications Network Operators’ Association represents the established network operators such as Telefónica (Spain), Orange (France), Deutsche Telekom (Germany), and Proximus (Belgium), and has been very active on ePrivacy. They have held lobby meetings, produced several open letters, and compiled a booklet of case studies on the way ePrivacy will impact the industry, and what EU law-makers should do about it.

Major telecoms players, especially those which own and operate their networks, have a traditional proximity to national ministries – a feature which several permanent representation officials confirmed in interviews. Observers tracking the ePrivacy dossier have told Corporate Europe Observatory that Spain and Germany are among the group of governments pushing the telecoms agenda hard in Council deliberations. The central demand (if ePrivacy is not to be scrapped altogether) is for the network operators to be allowed to use communications metadata – information about to whom, when, and where your communications are sent, which can reveal a lot about user and recipient-  with as few restrictions as possible. Such demands appear to have been listened to, with recent Council proposals making clear moves in this direction

And what about Big Data? Council deliberations on ePrivacy have been taking place in the midst of the furore about Facebook, Cambridge Analytica and growing public concerns about on-line privacy. New ePrivacy rules would challenge Facebook, Google and others who deal in Big Data. A study into the consequences of ePrivacy for Facebook and Google has argued that tough ePrivacy rules “would require an overhaul of their current practices and would likely significantly curtail the scale at which they collect data.”

Unsurprisingly then, they have been actively opposing ePrivacy and articulating shared industry concerns about damage to their business model. Facebook has held meetings on the file with the European Commission, permanent representation officials, and is active in the European Parliament. Yet for obvious reasons it seems to be keeping a low profile, apparently relying on various trade associations to promote its interest in maintaining maximum ability to process users’ data with minimum restrictions. For example, the Computer and Communications Industry Association whose membership includes Facebook and Google has expressed concerns about the loss of advertising revenue for publishers. It also co-funded a study with Google that looks at the impacts of ePrivacy on venture capital investments in online news and advertising.

Member states need to get their privacy priorities straight

As Birgit Sippel MEP, the European Parliament’s rapporteur on ePrivacy, has said: “Member states are putting their foot on the brake and [are] basically just acting on behalf of industry”. Corporate interests are using their significant resources to run major lobby operations in both Brussels and in key member states like Germany and France, leveraging support from among the EU28 via lobby meetings or wider influencing strategies.

In too many important areas of ePrivacy – processing of metadata, privacy by design, consent, and tracking walls – the emerging Council position appears to be close to industry’s demands. With public concern about personal data security at an all-time high, member state governments must get their priorities straight and give preference to citizens’ privacy over the profit-driven demands of industry.

Corporate Europe Observatory: Under the influence