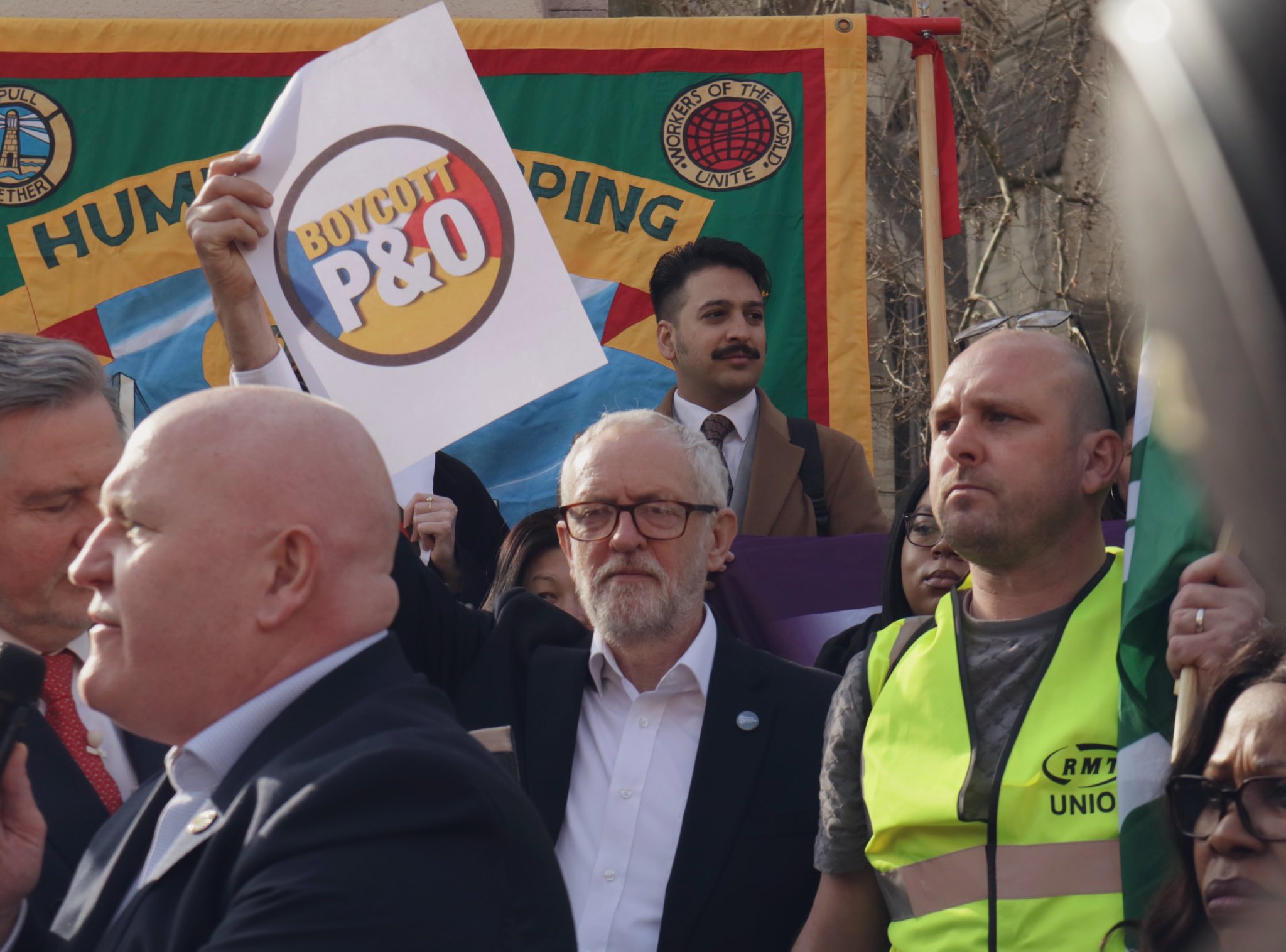 What has happened to P&O workers is exactly how deregulated Britain is meant to operate. With British regulations abolished or inoperative and EU regulations void, predatory international capitalists are free to treat workers like property, to be picked up or disposed of at whim, with no consideration at all other than the profit of the company.

Politicians have reacted to the public disgust at the summary sacking of 800 people (disguised as redundancy even though they are to be replaced by cheaper labour), by expressions of disgust, but with no proposals at all to do anything about the particular or the general situation. Nobody has contradicted the statement in the Commons by junior Tory transport minister Robert Courts that “P & O’s finances are a matter for them alone”.

Government ministers, most notably Kwasi Kwarteng, have noted that P&O’s actions are probably illegal, but nobody in government seems to feel the slightest urge to intervene to stop a major company deliberately acting illegally and on a major scale. P&O appears to have calculated that the paltry fines and three month extra salary compensation payouts that may result from illegality are outweighed by the savings it will make. Government fury seems to be confined to the vicious way the redundancies were announced.

DP World treats its British workforce with no more consideration than it treats its Pakistani and Bengali labourers in Dubai, and that fact appears to have rattled Tory ministers. But Tory condemnation has been entirely for the way the redundancies were handled, not for the fact of fire and rehire. The leaked fact we now know, that the government was indeed aware of the redundancies before the P&O staff, rather puts the fake indignation in perspective. That makes it even more unlikely that Johnson did not discuss it in when in Dubai the day before.

But this is all precisely how the system is meant to work. DP World are a major player in the governments Freeports initiative. These are zones where companies, with a hub physically in the Freeport zone and satellites virtually “in” the zone, will be even more exempt from regulation than they will be in the rest of the UK. Plans are already in place to build hostels in the Freeports and bring in workers from Colombia and other sources at £1.40 an hour – exactly the kind of system that operates in the Gulf states.

Employment legislation of course is not the only regulation the Tories are seeking to obliterate. Employment, environmental, child safety, food safety, building standards, there are numerous standards the UK is now ready to revoke or water down as part of the “benefits of Brexit”. The Freeports will be the cutting edge, but across the UK the Tories are planning to allow capitalists to use their muscle with minimal protection for the employee, consumer or taxpayer.

P&O is a sign of the times. That we have no political party in Westminster calling for the nationalisation of P&O reflects the collapse of political diversity in the neo-con UK. The Labour Party has returned to Blair’s policy of acquiescing in all the Tory anti-trade union legislation from Thatcher on. Starmer has come up with an empty slogan about a “new deal for workers’ rights” in response to the P&O debacle. His great new idea appears to be a right to flexible working, which is a very good thing for middle-class mums and I am all for it, but not of much practical help to a ferry worker. To be fair there are some Corbyn remnants in Labour industrial policy, but give Starmer time and there will not be.

There is no salvation to be had from the elite and their stranglehold on the political system and the mainstream media. We have to go back to the basics and build again the notion of horizontal solidarity in society. Liberal philanthropy did once assist the development of a more equal society in the UK, which reached its zenith in the 1970’s, but working class self-organisation, particularly through the union movement, was always essential to societal advance.

We now live in a society where liberal philanthropy is reserved for emoting about distant conflicts or channeled into identity, rather than class, politics. We live in a society where inequality in wealth distribution is returning to nineteenth century levels, but many of those left behind consider themselves too genteel to identify with working people and do anything about it.

I do strongly urge everybody to find out today what union you are eligible to join, and to join it. The paradox is that the unions themselves are so desperate to fit in with the new normal that I myself am excluded from joining a union as a dangerous radical. I have yet again applied to join the NUJ. Their current excuse for keeping me out is that people subscribe to my site and I am therefore not paid per article. This seems to be a rule that Michelle Stanistreet has invented unique to me – John Sweeney, Jonathan Cook, Paul Mason and many others run a subscription model. I remain however determined to join and urge you to join a union too.

The government genuinely is angry about P&O, but not because of what it is doing. Simply the startlingly abrupt way that it has acted has brought a harsh spotlight on the deregulation of the UK and what it entails. British Gas did effectively the same thing more smoothly and with far less publicity.

Jacob Rees Mogg is now tasked with pursuing with gusto a bonfire of rights and protections across the whole sphere of government. If you are a billionaire, great times are coming. If you are anybody else at all, welcome to the world your ancestors struggled out of from the 1830’s on.

With grateful thanks to those who donated or subscribed to make this reporting possible. This article, as with all the content of my blog, is entirely free to reproduce and publish, including in translation.

————————————————-
Forgive me for pointing out that my ability to provide this coverage is entirely dependent on your kind voluntary subscriptions which keep this blog going. This post is free for anybody to reproduce or republish, including in translation. You are still very welcome to read without subscribing.

David Whyte – Catalonia: Time to Smash this Tyre-Slashing State and Build Something Better

David Whyte’s report from Barcelona provides an analysis concerning the current events in Catalonia that is lacking in other media. David Whyte, is a Professor of Socio-legal Studies at theUniversity of Liverpool and one of […]

Many poor countries were pushed to privatize their pension systems to the benefit of international pension funds and insurance companies. After reversing this costly failure, they are sued by financial companies who want their expected […]