Is the U.S. in recession? If so, when did the recession start, and what caused it?

The usual economic definition of “recession” is two successive quarters of negative GDP growth. But in Q1 2020, growth was positive, though it was apparently slowing sharply (more on this shortly):

So using the standard economic definition, the U.S. is not yet in recession.
But according to the Business Cycle Dating Committee of the National Bureau for Economic Research (NBER), the U.S. entered recession in February:

The committee has determined that a peak in monthly economic activity occurred in the U.S. economy in February 2020. The peak marks the end of the expansion that began in June 2009 and the beginning of a recession.

February? The New York Fed’s nowcasting report for February showed no sign of recession. The most recent nowcast shows the economy dropping off a cliff at the beginning of April: 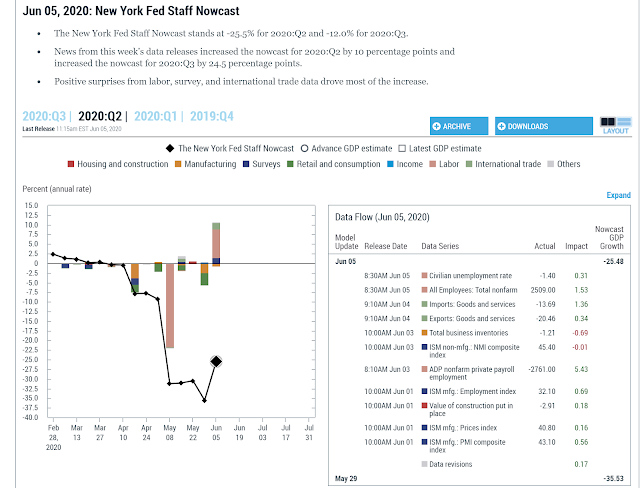 Of course, even nowcasts have lagging data. The date of the collapse according to this chart is when the NY Fed reported it, not when it actually happened. But a collapse in February? Really?
No, there was no GDP collapse in February. Quite the reverse, in fact. NBER defines the start of the recession as the point where the growth rate of the economy starts to slow:

So in February, the growth rate peaked. The trend was downwards from then onwards – as the NY Fed’s chart shows. NBER’s announcement that the recession started in February is therefore entirely consistent with Fed nowcasts showing that it started as late as April. Yes, I know this is bizarre. But bizarre things happen when you define the same phenomenon in two different ways.
Note that in NBER-world, the growth rate is positive at the start of the recession. Those of you who have read my previous writing on rates of change (or are familiar with differential calculus) will recognise this as our old friend the second derivative – the point where the trend reverses. The economic definition, however, uses the first derivative – the point where the growth rate itself becomes negative. Since trend reversal precedes growth turning negative, recessions as defined by NBER start earlier than recessions defined using the economic definition. If this isn’t clear, just imagine what happens when you take your foot off the accelerator while driving your car up a hill. The car slows down rapidly, but it continues going forward. It doesn’t immediately start sliding down the hill.
In NBER-world, the economy also emerges from recession sooner than in the economic definition. NBER takes the lower turning point, when growth is at its most negative, as the end of the recession, whereas the economic definition requires the growth rate to be positive. We can say, therefore, that the recession as defined in the standard way lags NBER’s definition, possibly by several months. Thus, according to NBER the U.S. is already in recession, whereas according to the economic definition we don’t even know yet if there will be a recession at all. I hope this makes sense.
But the confusion doesn’t end there.  The chart above shows the peak was in Q4 2019. Some people have interpreted this to mean that the recession started some time before the pandemic, and must therefore have been due to other causes. A whole cottage industry has sprung up to devise ever more complex reasons for the recession, ranging from the Fed’s interventions in repo markets to the U.S. Government’s worsening trade relationships with China. Even the U.K.’s exit from the EU on 31st January 2020 has been fingered by some disgruntled Remainers as a possible cause. But I’m afraid all of these brilliant ideas are wrong.  The apparent time discrepancy is illusory. It arises purely from the view of the data. There is no doubt whatsoever that this recession is caused entirely by the pandemic.
Let me explain. So far, we have been using monthly data. But the FRED chart shows quarterly data. Usually, peak monthly activity occurs within the quarter in which the economy peaks. But the NBER says that the collapse in economic activity in March 2020 was so extreme that despite the peak in February, the aggregate figures for Q1 were below those for Q4 2019:

The fact that the monthly peak of February occurred in the middle of 2020Q1 while the quarterly peak occurred in 2019Q4 reflects the unusual nature of this recession. The economy contracted so sharply in March (the final month of the quarter) that in 2020Q1, GDP, GDI, and employment were significantly below their levels of 2019Q4.

So although the quarterly data show the trend reversing in Q4 2019, suggesting that the recession started three months before the pandemic, this is entirely due to the extreme swings in the monthly data for February and March 2020.
Perhaps the clearest view of the way in which dreadful economic data in March forced forecasters to downgrade their view of the economy comes from the Atlanta Fed. I’ve charted their real GDP forecasts by nowcast date for Q1 and Q2 2020: 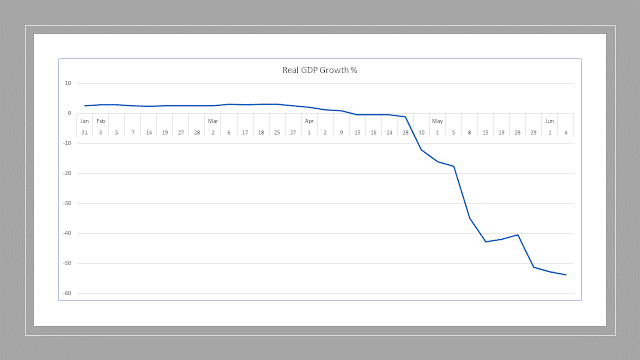 I haven’t marked it on the chart, but the forecasts switch from Q1 to Q2 at 28th April. So they are lagged by 1 month plus whatever lag there is in the incoming data. NBER says the economy fell off a cliff in the middle of March, so the lag in the incoming data would seem to be about 2 weeks. The chart shows just how dramatic that economic collapse was. It was sufficient to downgrade the Atlanta Fed’s final forecast for the entire quarter from 3.1 percent in March to ninus one percent by the end of April.
Perhaps more importantly, there is no sign whatosever of any recession prior to the pandemic. The U.S. economy was ticking along nicely at a growth rate of about 2.5%, unemployment was low and investment was strong. All of that came to an abrupt end in the second half of March.
So the economy did indeed peak in February 2020, not Q4 2019. And the recession, which definitely exists even though we don’t yet have complete Q2 data, was caused by the pandemic.

Discrepancy between passenger vehicle type-approval test results and in-use fuel consumption and carbon dioxide (CO2) emissions at 42 per cent, with first indications of a possible slowdown in the growth of the gap. The International […]

The COVID-19 pandemic is not a random event. It is a symptom of a global economic system that is destroying the living planet. George Monbiot is a journalist, academic and political and environmental activist Cross-posted […]