A central theme of Chancellor Angela Merkel’s tour of African countries, which began yesterday, will be the expansion of the EU’s defense against refugees. As government circles confirmed, following Merkel’s talks yesterday in Senegal, she will also negotiate today in Ghana and tomorrow in Nigeria, steps for stopping people fleeing poverty, hopelessness and war and facilitate the deportation of refugees from Germany. In opinion polls, nearly half of the Senegalese, and around three-fourths of the Ghanaian and Nigerian respondents, signaled their wish to leave their country, because of dire poverty and a dramatically high youth unemployment rate. European companies are systematically destroying African jobs, for example, by overfishing the Senegalese coastline, thereby heavily damaging Senegal’s fishery sector or by the EU’s poultry dumping in Ghana, ruining the domestic poultry industry. Merkel does not intend to address these EU practices causing people to flee their countries. 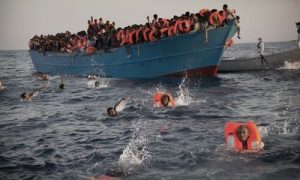 Who would have expected this from the virtuous EU? Read here

That would be a bleak day for tax havens and financial institutions: “After our research it is obvious that Kenya and Zambia could do without development aid if they were able to tax justly and […]