On Saturday 50,000 protestors participated in a march to the Hambach Forest, one of Germany´s few remaining virgin woodlands.  The Energy transnational corporation RWE wishes to destroy it to enable them to surface mine brown coal. With its  continuing use of brown coal power plants Germany will not fulfil its Paris Climate Agreement pledge. 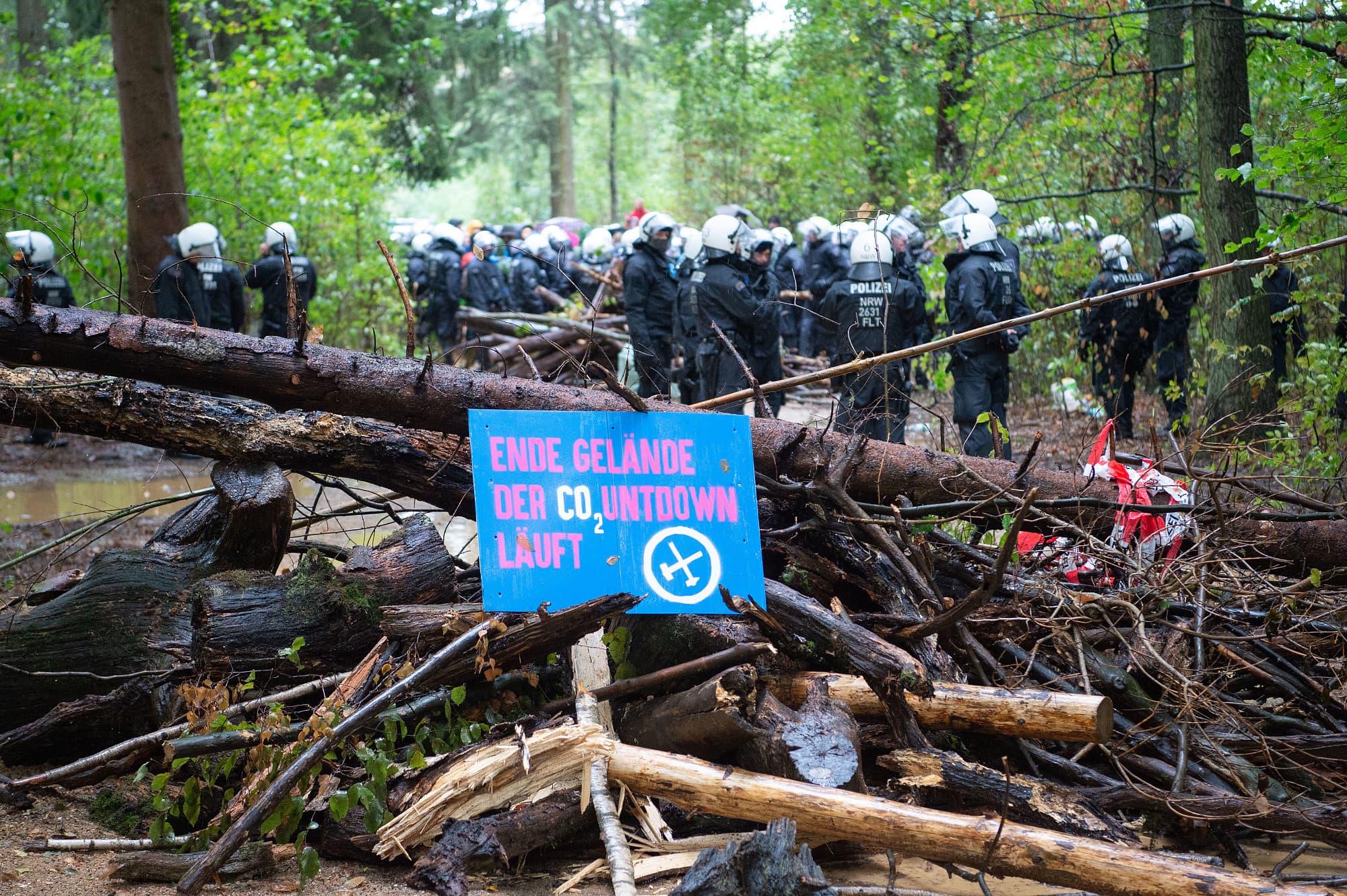 The Hambach Forest in is a 12,000-year-old woodland located between the German cities of Cologne and Aachen in the Rhenish brown coal district. The 200-hectare forest lays on the south-eastern edge of a huge crater landscape, the 7 by 7 square kilometre Hambach open-cast mine, with a depth of up to 300 metres. In order to continue the highly profitable lignite-fired power generation of the RWE Group in the Hambach opencast mine beyond 2022, RWE now wants to clear the last hectares of virgin forest. But in the course of the summer, which symbolized a harbinger of climate change for everyone in the Rhineland with record high temperatures, resistance broadened in lightning speed.

Some trees in the Hambach Forest have been occupied for six years. From year to year the number of tree occupants has increased to over 100. Massive sympathy and support has come from the residents of the surrounding area. During “forest walks” that have been taking place for 4 years, the number of participants has increased from initially a few hundred to 10,000, and this every Sunday! After the RWE Group had the occupied trees cleared with the help of 4,000 police officers in September, the Hambach forest suddenly became the symbol and focus of resistance against the climate policy of the German Federal Government of Angela Merkel´s Christian Union and the Social Democratic parties, as well as the conservative State Government of North Rhine-Westphalia.

Lignite is the most climate-damaging form of electricity generation. Every tonne of lignite burnt produces one tonne of CO2. 20% of greenhouse gas emissions in Germany are the result of burning lignite to produce electricity. RWE´s Neurath power station alone emits as much CO2 as Slovenia does in a year. But RWE is clinging to lignite and its high profits. The Rhineland lignite industry has 9,000 employees and the CEO of RWE, Schmitz, recently claimed that if the Hambach forest is not cleared, the group will sacrifice profits amounting to 5 billion euros. Accordingly RWE has a very strong interest in maintaining lignite-fired power generation as long as possible. The company has suffered a huge loss of prestige due to its belligerent eviction of protestors and the electricity customers of RWE’s eco-electricity subsidiaries are terminating their contracts on a massive scale.

Germany signed the Paris Climate Agreement of 2015, in which it pledged to reduce greenhouse gas emissions by 40 % by 2020. But since the necessary phase-out of coal-fired power generation is is being delayed, Germany will clearly miss the 40% target. The pressure of the lobbyists from the energy companies and the trade unions on the federal government has as too often in Germany gained the upper hand. The government has already slowed down the expansion of renewable energy and the threat of the loss of 20,000 coal-fired jobs has mainly alarmed the Social Democrats.

When it comes to the negative consequences of climate change for jobs in Germany, the Social Democrats, like the extreme right AfD, have become climate change deniers. In a coal commission appointed by the German government, there is a tenacious struggle for decommissioning coal power stations. The trade unions and RWE want to continue burning lignite until 2040, although everyone in the Commission knows in that case the reduction targets pledged in Paris would not be achievable.

The protests at Hambacher Forest have raised the old social conflict anew: Preservation of nature or preservation of jobs. Joachim Schellnhuber, former president of the Potsdam Institute for Climate Impact Research, recently pointed out how hypocritical this argument is: “In fact, there were about 100,000 jobs in the lignite sector of the GDR in 1969. Now there are less than 10,000 direct jobs in eastern Germany´s coal industry. In other words, normal market capitalism has abolished these jobs, and no one was bothered in the least.”

Germany´s groups against climate change movement have very powerful opponents, who use such antagonistic tactics as 4,000 policemen to clear a few tree houses. And yet popular resistance can’t be defeated. Even after the removal of the protestors, the protest and various acts of resistance continue, from blockades of the coal railway from the open-cast mine to the power plants, sugar in the tanks of the huge excavators, to sit blockades in front of RWE’s corporate headquarters.

Last Friday, the judges of the State Administrative Court served RWE with an embarrassing defeat: No deforestation, as long as the questions of natural law, such as the survival of bats in the Hambach forest, remain unresolved. This is a legal and political success for the climate movement. Still it is only a brief pause in the conflict, as Merkel and the Social Democrats refuse to adopt the necessary necessary measures to reduce CO2 for industry, transport and agriculture into law.

Therefore, the slogan of the best-known climate group in Germany, “End of the line” (Ende Gelände), remains topical: “Coal withdrawal is manual work”. The group has called for a new occupation campaign in the Rhenish lignite mining area from 25 to 29 October. Over the past four years, the group has occupied lignite mines in Lusatia and the Rhineland, in some cases with 5,000 protestors. Although the police cleared these occupations within 24 hours, this form of civil disobedience is becoming increasingly popular among the mostly young activists.

The younger generation in particular is highly aware of the need to promote climate justice, because climate change is already happening and not, as the lignite lobby says, can wait 20 years. The earth has already warmed by more than 1 degree and the 2 degree target set in Paris has become increasingly difficult to achieve.  If the industrialised countries are to reduce their greenhouse gas emissions by 85% by 2050, as agreed in Paris, all fossil fuel power plants in Germany must be shut down in the next decade and car traffic with combustion engines must be completely stopped. This is almost utopian and not possible without a fundamental change in public awareness and a dramatic change in the political situation.

“Ende Gelände” carries the banner “System Change – not Climate Change” at its protests. Given the prevailing conditions, this sounds crazy – and yet it is the only solution if we want to prevent millions in Bangladesh from having to flee from rising sea levels or in Africa because of the drought, only to knock on Europe’s doors.

Tonight in Berlin! Steve Keen: “When the Swabian hausfrau saves, what does she do to your bank account?”

Mitchell A. Orenstein, Bojan Bugarič – How populism emerged from the shadow of neoliberalism in Central and Eastern Europe

Hungary and Poland have pursued a notably ‘populist’ approach to the economy in recent years, which has begun to spread to other countries in Central and Eastern Europe. Mitchell A. Orenstein and Bojan Bugarič argue […]