Heiner Flassbeck and Patrick Kaczmarczyk write that amidst global political and economic fragility, the downturn in the Germany economy adds to the uncertainty in a world that, as Paul Krugman put it, has a “Germany problem”. It not only raises questions and doubts over the future of the largest European economy but, more importantly, over the future of the Eurozone and Europe

Heiner Flassbeck formerly served as German vice-minister of Finance and long-standing chief economist at UNCTAD. Currently, he is professor of economics at the University of Hamburg, editor of the political economy magazine Makroskop

Patrick Kaczmarczyk is a doctoral researcher at the Sheffield Political Economy Research Institute (SPERI) at the University of Sheffield. 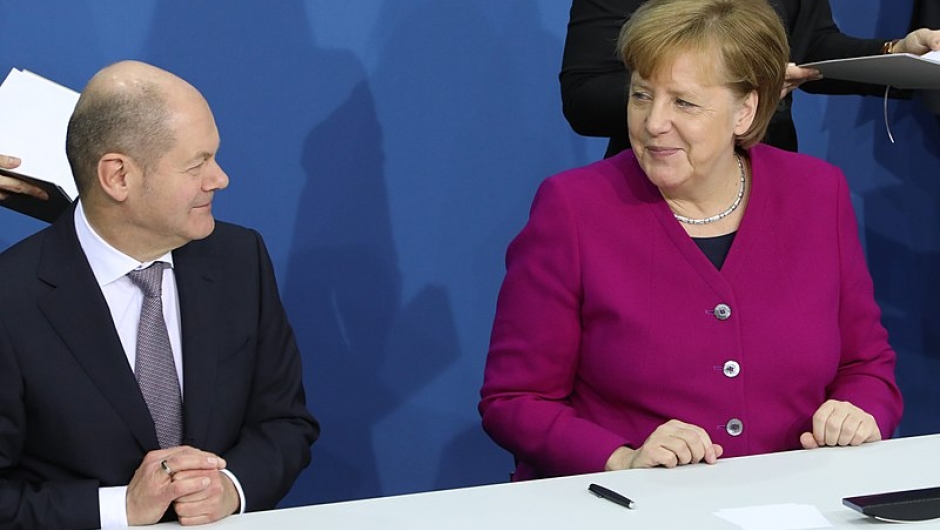 The German economy is struggling. Both the publication of the ifo business confidence index (a survey among 9,000 German firms) and the statistics of incoming orders for the manufacturing sector at the beginning of September revealed a continuation of the economic downturn in Germany that cannot be ignored anymore. The business climate dropped to 94.3 points – its lowest value since November 2012. Incoming orders (see Figure 2 below) point to a severe weakness of investment. These factors, amongst others, further strengthen the now widespread expectation that the Federal Statistics Office of Germany (Statistisches Bundesamt) will announce negative GDP growth for the third quarter of 2019. Since this would mark the second consecutive quarterly contraction, it means that the German economy would be officially in a technical recession.

The recession in Germany comes at a time at which the only readily available instrument in the Monetary Union (EMU) to fight recessions, namely monetary policy, is not available anymore. Moreover, German policymakers, the media, and professional economists have imprudently ignored the downturn, so that a discussion about appropriate countermeasures on the fiscal side remained silenced and valuable time was lost. The repercussions for several fragile member states of the EMU, such as Italy and France, could turn out to be ominous.

The German recession has been in the making for a very long time and, as we argue in this article, had kicked in already in 2018. We arrive at this conclusion due to the fact that the key cyclical indicators, incoming orders and production in industry and the construction sector, have been on a near continuous decline since the beginning of last year. What we have seen over the past couple of months is more of a new low, which makes it impossible to further deny the German recession. The production in the crucial sectors of the economy, as the revised data from last week show, is now below the level reached before the beginning of the widely celebrated upswing in 2016. Incoming orders, in particular those of domestic origin, indicate that domestic demand in Germany is flat and corporate investment is falling.

Statistical wizardry to avoid discussions about the “recession”?

This argument stands in stark contrast to what is published as official calculations of the GDP. During 2018, Germany’s GDP, as published by the Statistical Office, has been more and more detached from the primary statistics at hand (and entailed larger revisions than in any time in the past decade). The reason, however, is not a structural shift in the German economy, as claimed by the government, but methodical problems in the calculation of the “official” GDP. Without having recent and updated data available to prove their point, the government and its statistical office insist that the (invisible) services sector is booming and compensates the weakness of the visible industries. This is extremely implausible, and we question such conclusions as long as reliable statistics contradict them. In their absence, official posturing seems to be just an attempt to delay the acknowledgement that Germany is in a recession. 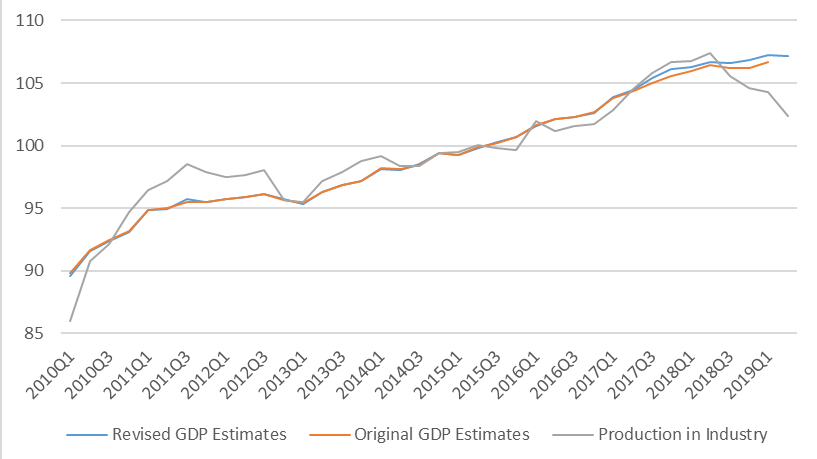 What we actually see in the primary data is that the orders in the manufacturing sector, the most important and reliable business cycle indicator in Germany, markedly cooled down during the last quarter of 2017 and have been declining consistently since the start of 2018. Relatedly, output in the goods-producing sector began to stagnate towards the end of 2017, and displays an outright decline into the second quarter of 2019 and into July 2019.

Finally, as previously mentioned, the ifo business climate index has been in steady decline since the start of 2018. From January 2018, it dropped from 105.1 points to 102.5 points in April, and, with the exception of August and September 2018, continued to fall ever since to the present level of 94.3 points. In the manufacturing sector, the situation appears almost dramatic. Ifo states that in this sector, “the fall in the business climate indicator has yet to find a floor” and that “the last time that industrial companies demonstrated such pessimism was in the crisis year of 2009”, whilst “not a single ray of light was to be seen in any of Germany’s key industries.” 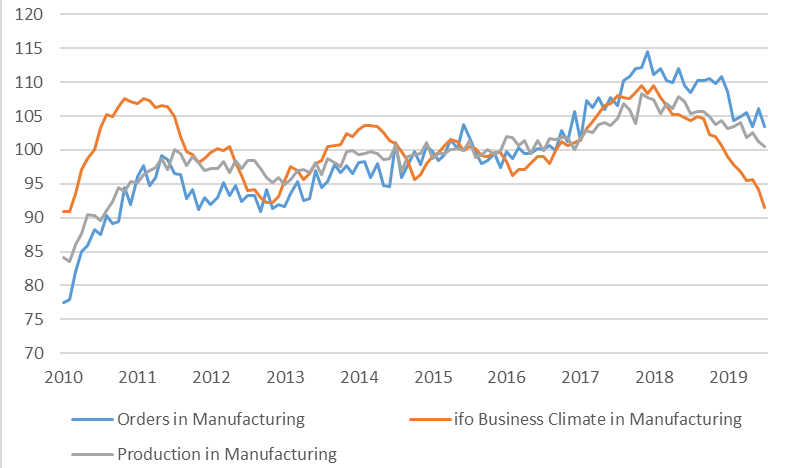 In sum, therefore, a sober assessment of the primary data indicates that the onset of the recession should more accurately be dated back to 2018, and not, if anything, to the third quarter of 2019. We highlighted this danger in our MAKROSKOP business cycle report in April 2018, as evidence was mounting that the observed trends were signs of a serious downturn, and not a mere statistical fluctuation. By the end of 2018, we found our initial assessment to be confirmed, yet a wider political reaction is still absent.

All of these warning signs, however, were completely ignored by the majority of professional economists. German economic “think tanks” across the board found, in contrast to our assessment, the German economy to be in a “boom period” in early 2018. In late 2018, it was acknowledged that the pace of the economic expansion had decelerated, yet the outlook for 2019 remained positive. The deceleration itself was later retrospectively attributed to exogenous factors, such as the low tide in the Rhine and various supply side constraints. The German media widely jumped on the bandwagon, calling as late as April 2019 for optimism about the German economy.

What’s the reason and why does it matter?

The latest data from primary statistics all over Europe reveal similar recessive (or at best stagnating) tendencies for most European economies. This is particularly dangerous, given that a recovery outside Germany has been absent for many years and the latest turnaround had been modest: Output in Italy and France is low and unemployment remains remarkably high. Due to the German obsession with fiscal austerity and its deflationary wage policies, aggregate demand in the single market – by far the most important market for all European states – remains insufficient to generate high employment and induce corporations to invest.

Expansionary fiscal policy, the most effective tool to deal with such a shortfall in demand, is banned by ideologically-driven legal constraints originating in Germany. Given the fragile trade relations of Europe with the US and of the US with China, an attempt by European economies to export themselves out of the crisis through a weak euro risks provoking unpredictable forms of retaliatory action by the US Administration and other countries around the world.

A renewed economic downturn in an already poorly performing European economy may turn out to be the proverbial match thrown into a powder keg. Notwithstanding the severity of the situation, the German government still shows an extraordinary amount of resistance to any weakening of its adherence to the Swabian housewife mentality towards government finance. In May 2019, Olaf Scholz, the German finance minister, contemplated a revision of the budget, further potential cuts, and the notion of “making an even greater effort” to avert the downturn. More recently, he reaffirmed his stance by arguing that new debt would only be necessary in a contraction similar to the one in 2008. Chancellor Angela Merkel regards sticking to the Schwarze Null (federal budget in black figures) as another “form of sustainability”, and she has support within her own party as well as among numerous conservative German economists.

Yet, anyone has been following the debate in Germany will also have found some prima facie indications of change. Regardless of the balanced budget affirmations of the German government, SPIEGEL announced that Scholz and Merkel may consider boosting spending through new debt in a recession. The same tendency was palpable during the latest discussion in Parliament on the 2020 budget. Moreover, several individual CDU politicians came out questioning the most sacred of cows in Germany, and even the lobby of industry is beginning to change its tone.

The window of opportunity for change has undoubtedly opened a little, but the force of inertia should not be underestimated. Strong doubts remain as to how reliable and sustainable the winds of change will be, not least because a lot of political and intellectual capital has been invested in the balanced budgeting follies. Nonetheless, after a decade of ruinous economic policies, dictated by Berlin and swallowed by Paris and Rome, it is high time to rediscover reasonable macroeconomics to avoid further strengthening of the “populist” movement, driven by an escalation of social and political unrest.

Carlos Díaz and Lucía Aliagas from trade union CCOO Catalunya takes a look at Spain’s biggest food delivery company, Glovo, arguing that the company has a mission of “pure economic extraction” and is willing to […]

Heiner Flassbeck – The economic situation in Bulgaria and Romania – Part 2

For economic policy in most Eastern European nations, only the market counts. However, this cannot work in a world where the conditions for traditional macroeconomic management no longer exist. Heiner Flassbeck is an economist, as […]