This is not fascism, but it is postfascism. The degree to which the law is used and abused for political purposes in Spain is directly descended from the Franco regime.

This week Spain’s show trial against twelve Catalonian leaders of its independence movement concluded. BRAVE NEW EUROPE is posting two articles on the topic today; this analysis of the whole proceedings and report of the week’s proceedings (here).

Ignasi Bernat and David Whyte are editors of Building a New Catalonia, a new book exploring the anti-capitalist, feminist and socialist dimensions of the Catalan independence movement. 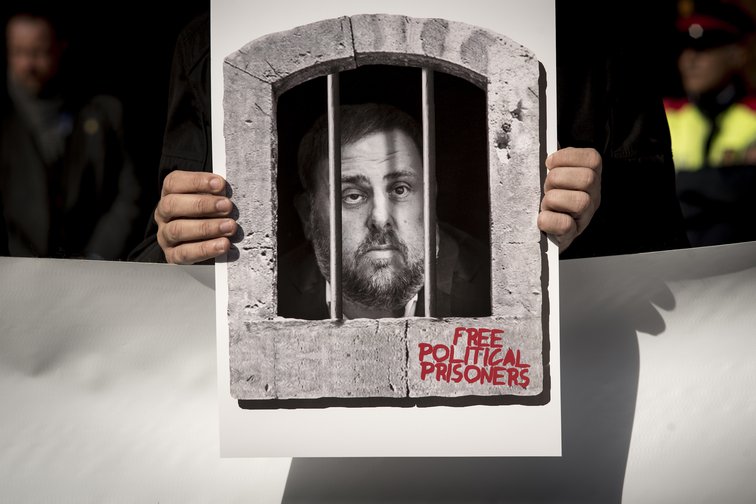 The trial of Catalan politicians and community leaders that finished in Madrid this week has revealed how far the deeply political nature of Spain’s legal system can be pushed to dangerous extremes.

One of the most chilling features of this trial is that the far-right VOX party are inside the court and are formally part of the prosecution. Indeed, VOX stands shoulder to shoulder with the Spanish public prosecutor. This is the result of a unique Spanish legal procedure which allows for a ‘popular prosecutor’ to lay charges. The political significance of this for understanding the trial cannot be under-estimated. As defence lawyer Benet Salellas has pointed out, VOX made exactly the same argument – word for word – as the Spanish state prosecutor. The only difference is that VOX have argued that the Catalan politicians are part of a criminal organization (the democratically elected Catalan government and civil society organisations) and on the basis called for 74 year sentences, in comparison with the 7-25 year sentences called for by the public prosecutor.

Salellas’ client, Jordi Cuixart, the President of Òmnium Cultural, imprisoned for sedition and rebellion for organizing a peaceful demonstration, summed up the problem of this trial in his closing statement to the court on Wednesday. “The problem is not civil disobedience, the problem we are facing now is civil obedience…the obedience that allows democrats to be accused by the extreme-right wing in collusion with a Spanish PSOE Government; the far-right, fascists who are accusing us, the democrats, because we are defending basic values that we all share.”

Spain is not a totalitarian regime, but the offences of ‘sedition’ and ‘rebellion’ with which the politicians are charged, have their origins in martial law. They are of course arcane, medieval offences that have been abolished in many democracies but remain in the Spanish constitution. And as military historian Roger B. Manning has documented, the modern definition of ‘sedition’ has its origins in English sixteenth century martial law. Sedition was used as a suitably vague offence against the state to support tough clampdowns on social protest, especially in the early colonial period. Rebellion is a similarly arcane offence that went out of use in Spain in the early twentieth century but was revived by Franco to deliver arbitrary punishments to his opponents.

This politically charged legal process begins to look even more political when we look at the other charges laid against the accused in the Catalan trial. The offence of ‘misuse of public funds’ that many are accused of was developed to deal with corruption in public office, not to punish spending on democratic participation. In today’s Spain, so recently following the collapse of the Rajoy government under the weight of a huge corruption scandal, and with so many unanswered questions in a range of corruption investigations, this is not merely an irony. In a country where the embezzlement of public funds has emerged on an industrial scale, the charges being issued for relatively small amounts of money are a very useful diversion from real ‘misuses of public funds.’

So we know Spain is not a totalitarian regime, but lets just recap here. A far-right political party lays the same charges in the same trial as the public prosecutor. And the offences that are alleged against them are the same laws that were used to crush rebellions in the Middle Ages and in the fascist era. If those charges cannot stick, then charges that amount to corruption are levelled against those same political opponents. In the case of the latter, the act of organising a democratic public vote is transformed into an act of abuse of power and corruption.

In May the UN Working Group on Arbitrary Detention condemned Spain and demanded the immediate release of 3 of the political prisoners. It told the Spanish government it must investigate its flawed system and provide access to compensation for the prisoners. How did the nominally Socialist government respond? It waved away the Working Group with a now familiar cold indifference, accusing it of a “conflict of interest.”

This trial has all the hallmarks of a form of state power that we might find in a totalitarian state rather than a democratic state. Deeply political trials, martial laws and open disdain for UN human rights standards. The Spanish state may not be totalitarian, but it has inherited the legacy of Franco’s highly politicised system of justice. The key legal institutions are stuffed with political appointments, many of whom identify with the Spanish nationalism of the Conservatives and the VOX Party.

Francoist continuities lie deep in the structures of the legal system, the political system and the economy. It is those continuities that have risen to the surface in the Catalan conflict. This is not fascism, but it is postfascism. The degree to which the law is used and abused for political purposes in Spain is directly descended from the Franco regime. We should not forget this in the weeks and months to come when the Spanish supreme court hands down arbitrary judgements and is once again condemned by the international human rights community for its politically contaminated justice system.

Michael Roberts getting us off to a rambunctious start to the week with an analysis of where things are going economically. Michael Roberts is an Economist in the City of London and prolific blogger Cross-posted […]

Macroeconomics remains divorced from what is going on in the real economy. Michael Roberts is an Economist in the City of London and prolific blogger Cross-posted from Michael Roberts Blog Recently, Benoît Cœuré, a leading […]

Jonathan Cook – The US and UK may not will Assange’s death, but everything they are doing makes it more likely

Freedom of the press and human rights always seem to be one of the main topics in politics and corporate media, but simple cases like Assange prove how empty that is Jonathan Cook is an […]