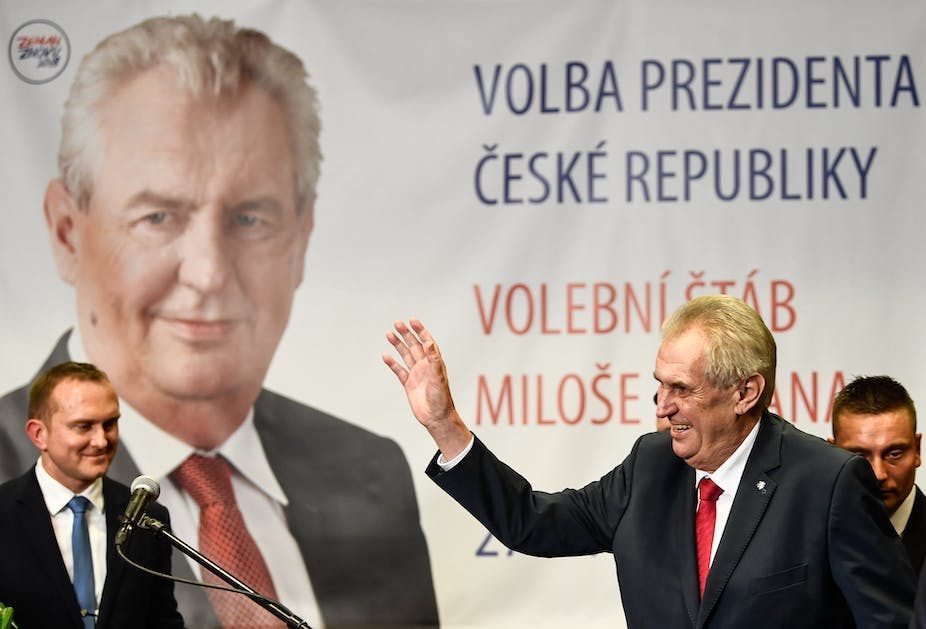 Voters in the Czech Republic re-elected their current president, Miloš Zeman, for another five-year term on January 27. He beat Jiří Drahoš, a chemistry professor, who has never held political office but served as head of the country’s Academy of Sciences during much of the past decade.

Reports quickly labelled Zeman a pro-Russian candidate who based his campaign on a strong anti-immigration platform. Both statements are true. Yet it would be a mistake to file the result as another confirmation of a right-wing nationalist surge in central Europe.

The contest, its style, and the final outcome are symptomatic of the profound divisions and challenges besetting Western liberal democracies. The election was a Czech variation on the UK’s EU referendum result, America’s election of Donald Trump, or the popularity of Dutch far-right politician Geert Wilders. Even the winning margin of 2.75%, signifying the size of the gap between two polarised camps in the Czech society, was similar to the Brexit result.

The two groups behind each candidate formed along the now familiar lines – city vs countryside; modern economy vs post-industrial wastelands; higher vs basic education; young vs old. It was all there, accompanied, of course, by Russian trolling. More than anything, the election showed how much Czech politics is in a lockstep with wider Western developments.

Arrogant, vindictive, dismissive towards journalists and intellectuals, Zeman displays many traits exhibited by other politicians of the same ilk. A vulgar, Trump-like style has been his trademark since the 1990s. A strong supporter of the war on terror, he shifted easily towards opposing migration and speaks about Islam in a way similar to France’s Marine Le Pen. His biting witticisms resemble those of former UK Independence Party leader Nigel Farage.

But Zeman is not your run of the mill national populist. A highly educated, self-proclaimed European federalist, he has long maintained that the EU should have unified foreign and security policies. He keeps calling for further integration in other areas as well. Among the first things he did upon his election in 2013 was to erect the EU flag at Prague Castle with the then-president of the European Commission, José Manuel Barroso. Zeman advocates for the Czech Republic to be at the centre of EU integration and says its reluctance to accept the euro is irrational.

Zeman will let you know where he stands. He likes nothing better than to do so in an abrasive and insulting manner. Toning it down in the final days of the campaign, he was back to his old ways in his victory speech, belittling opponents and making fun of journalists. Winding up “the liberal elites” remains his favourite hobby – and his voters love it.

Critics point out that Zeman is embarrassing, shows no decency, makes them feel ashamed, and his vanity is just a tool of Russian and Chinese interests. There is much truth in these criticisms. His opponent, Drahoš, made them the centrepiece of his campaign, presenting himself as a steady, well-mannered, and dignified “Mr. Professor” (Central Europeans like their titles). He was unobjectionable, awaking little passion one way or the other. The promise of a less conflictual and more respectful leadership style got him close to being elected. But it wasn’t enough.

Zeman, aged 73, has little chance of forming a politically transformative movement. He has already announced this was his last election. The Party of Civic Rights, which bore his name until four years ago, has never done well at the polls and once again failed miserably in the September 2017 parliamentary election, netting just 0.36% of the vote. But Zeman has allies and admirers in other parties. Notably, he celebrated his victory with the leaders of the Social Democrats and the anti-immigration Freedom and Direct Democracy Party.

Where he can do real damage is in his disregard for institutions. Demanding utmost respect for his own office, Zeman shows little regard for the institutions that make up a thriving liberal democracy. His remark that he will promote more direct democracy, because citizens are smarter than journalists and most politicians sounded ominously.

Russia and China look on

Internationally, Zeman’s Russian connections are very real. This was a good result for Moscow and Vladimir Putin hastened to send congratulations. Symbolically, as Zeman rejoiced on a podium with his family and closest collaborators, at the back of the group stood the towering figure of Martin Nejedly. Zeman’s adviser, Nejedly is widely known to have strong links to the Kremlin.

Beijing must have also been pleased at the result. During his first term, Zeman travelled to China a number of times. He has shown a great deal of deference to Chinese interests and speaks with admiration about the Chinese model.

For Zeman these links with Russia and China may be another way to offend “the liberal elites”. But they are sure to grow in importance and will further entrench those interest groups who promote them. Preferring profit over anything else, these groups are contemptuous of any subtleties of liberalism that stand in the way of getting the job done.

If Zeman’s success replicates what has been going on elsewhere in the West, it raises the same challenges to the liberal political order. The coming years will show how resilient the democratic institutions in the Czech Republic are. Those Czechs who believe in liberal democracy need to keep calm in face of inevitable provocations, exhibit steely resolve in defending it, and engage in the daily grind of the democratic process.

The distribution of wealth has little to do with contribution or productivity, and everything to do with politics and power. Laurie macfarlane is Economics Editor at openDemocracy Cross-posted from Open Democracy Image: Glenn Halog, CC […]

Richard Murphy – Low interest rates are driving inequality ever upward, and it’s time we started to tackle this

The FT ran an article on this, but Richard does a much better job of explaining and analysing Richard Murphy is an economic justice campaigner. Professor of Accounting, Sheffield University Management School. Chartered accountant. Co-founder […]

Sarah Schiffling, Nikolaos Valantasis Kanellos – Five essential commodities that will be hit by war in Ukraine