For those of you who feel somewhat overawed by political economics, here is a good introduction, which will be followed by further such articles by John. 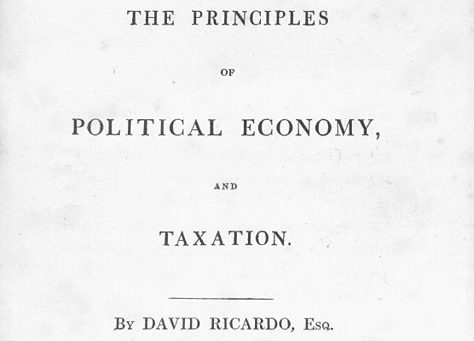 All great thinkers run the danger of misinterpretation, in part because they tend to leave their innovative ideas incomplete due to the newness of those ideas. Misinterpretation also results from more pedestrian writers using those ideas without the insights of the originator. All four economists I discuss in this series of blogs suffered from misinterpretation to some degree, perhaps none more than David Ricardo (1772-1823).

To the extent that economics students become aware of Ricardo at all, it is for “the law of Diminishing returns at the margin”, the idea that labour becomes less productive as more of it is set to work with the same amount of land or machinery (misattributed to him, for example, by Wikipedia). We find this dubious law nowhere in the work of Ricardo.

Ricardo’s great contribution was as the first macroeconomist. He sought to develop a method for analyzing economic activity as a whole. His most famous work, On the Principles of Political Economy and Taxation (1817), begins with a clear statement of its purpose, to investigate the production and distribution of aggregate output:

“The produce of the earth—all that is derived from its surface by the united application of labour, machinery, and capital, is divided among three classes of the community; namely, the proprietor of the land, the owner of the stock or capital necessary for its cultivation, and the labourers by whose industry it is cultivated.” [Preface]

In order to analyse the distribution of total output, one must measure it. This requires adding up all the different things produced, literally apples and oranges, in some common unit of measure. In 250 years economists have proposed three approaches, all of which Ricardo discusses: 1) money values, 2) production time in units of labour input, and 3) his unique contribution, a standard unit of output.

His model of distribution involved two major innovations, aggregation itself and economic expansion. Two hundred years later a modern reader finds it hard to appreciate the importance of these basic contributions, the apparently simple adding up of national production and the growth of that production. Adam Smith had written about both (division of labour in Book I and accumulation of capital and productive and unproductive labour in Book II), but had not done so in a rigorous way. He was a writer with striking insights (not all correct) rather than striking analysis. Ricardo represented the first economic theorist who constructed conclusions on the basis of systematic argument, then explored the implications of those arguments. This difference explains why Smith proves quite easy and enjoyable to read, while Ricardo’ work can seem dense and tedious.

One might reasonably ask, why is calculating total national output a problem? The obvious method is to add everything up at prevailing prices. To compare this amount to output one year later we adjust for change in prices, which gives two outputs in constant prices or “real output”. However, the two outputs are certain to be different in composition, each with less of some items and more of others. To put it in a simple example, are ten oranges and three apples more or less than three oranges and ten apples?

As is often the case, Keynes had a clear and rather charming summary of this aggregation ambiguity (General Theory Chapter 4):

“To say that net output to-day is greater, but the price-level lower, than ten years ago or one year ago, is a proposition of a similar character to the statement that Queen Victoria was a better queen but not a happier woman than Queen Elizabeth — a proposition not without meaning and not without interest, but unsuitable as material for the differential calculus. Our precision will be a mock precision if we try to use such partly vague and non-quantitative concepts as the basis of a quantitative analysis.”

To avoid this problem in his theoretic analysis, Ricardo chose the simplest version of the standard commodity solution (see above). He developed his macroeconomics for an economy with only one product. As strange as it may seem to the non-economist, the practice of assuming just one commodity continues in macro modelling to this day (discussed here, Chapter 10). Ricardo took the case of an economy that produced only “corn”, which was distributed as rent to landlords, profit to capitalists and wages to workers.

His second important contribution to macroeconomics, the distribution of income among social classes, demonstrates how an erroneous analysis can lead to deep insights. In Ricardo’s analysis, output grows by the application of labour and machinery to additional land in fixed proportion (i.e., ten labours and five ploughs per hectare). The capitalist farmers begin with the most fertile land and progress onto less and less productive land as the demand for food increases. As a result, output per hectare falls on the newly cultivated land (at the “extensive margin”).

All farmers want the best land and their competition for it means that the rent paid on the best land rises and determines the rent on all land. If wages are constant (Ricardo’s assumption) and output per hectare falls, profit of farmers must fall. This line of analysis led Ricardo to conclude that over time profit would disappear and growth would cease. This analysis failed to anticipate the impact of technical change on the productivity of land, most importantly fertilizers and machinery. Throughout the 19th century the amount of land cultivated in Britain fell as output per hectare rose faster than the demand for food.

Ricardo’s analysis of growth and distribution had an extremely important political implication. The conclusion that rising agricultural rents would arrest economic growth provided the analytical basis for his advocacy of free trade. At the time he published his Principles the debate over the “Corn Laws” dominated British politics. Protective legislation severely restricted import of grains, maintaining high prices and in some years severe shortages. Ricardo’s theoretical warning that rising rents, enhanced by trade protection, would end economic expansion carried considerable influence.

Despite the fundamental mistake in his logic, Ricardo’s treatment of aggregate distribution provided the basis for macroeconomic analysis and created a clear link between macroeconomic theory and public policy. Karl Marx, the subject of my third blog, would pursue more deeply the analysis of these issues, growth and distribution.

Edward Smythe – The UK economy is hooked on rising asset prices. What happens when the bubble bursts?

The risks of a private debt crisis in the United Kingdom are real enough. But the existential threat is that this will happen together with the bursting of the greatest asset bubble in the UK’s […]

Seventy-six riders participated in a new in-depth study on working conditions in the food delivery sector in the UK The Gig Economy Project, led by Ben Wray, was initiated by BRAVE NEW EUROPE enabling us […]