A lack of public concern in the West at dealing with the impending climate catastrophe isn’t accidental. It’s been engineered by political elites to serve their own interests

Jonathan Cook is the the author of three books on the Israeli-Palestinian conflict, and a winner of the Martha Gellhorn Special Prize for Journalism. 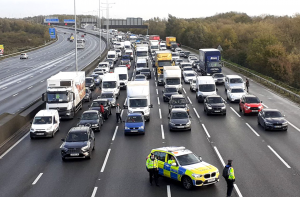 COP27, the United Nations’ annual climate conference attended by world leaders, kicked off in Egypt at the weekend in the midst of a wave of civil disobedience actions in the UK.

The protests have been led by environmental groups such as Just Stop Oil and Extinction Rebellion and come as oil giants have announced massive profits from surging energy prices caused by the Ukraine war, and new reports show catastrophic climate change is soon to reach a tipping point, becoming irreversible.

Antonio Guterres, the UN secretary general, warned on the eve of the summit that the world would be “doomed” if rich, heavily carbon-dependent economies could not reach an agreement with poorer countries. New figures show temperature rises across Europe have risen twice as fast as the global average, leading to increasingly unstable weather.

In recent direct actions, car showrooms, luxury department stores and oil lobbyists’ headquarters have been splattered with orange paint. Waxworks of the royal family in Madame Tussauds have been caked. Famous works of art have been targeted with soup and mashed potatoes. Scientists have occupied a car plant. The lobby of the British parliament has been taken over by demonstrators. And activists have scaled suspension bridges and blocked major roads.

There are signs too that the upswell of frustration and anger at the lack of urgency from western leaders and media in addressing the unfolding climate catastrophe is spreading. In the United States, protesters disrupted ABC’s daytime television show The View, accusing the network of platforming climate deniers and dedicating only six hours to the climate crisis in the whole of 2021.

Most of these actions have been ignored by the media or dismissed as the antisocial posturings of individuals divorced from the concerns of ordinary people.

That was certainly how the most publicised act of civil disobedience was received: two activists threw tomato soup at one of Van Gogh’s Sunflower paintings before glueing their hands to the wall next to the artwork.

The protesters were variously accused of vandalising a work of art (they hadn’t, it was protected by glass); of choosing the wrong target (they noted that their protest was to highlight how society values representations of nature over nature itself); and of being white and privileged (their defenders pointed out that they were using their privilege precisely because others who also cared about the environment could not afford to do so).

But the criticism most widely hurled at these various forms of direct action is that they are counterproductive, that they antagonise ordinary people and make them stop listening.

There is an obvious rejoinder. No one appeared to be listening before the activists took to the streets. Endless scientific warnings have made little impact on public discourse. The establishment media have paid only lip service to the dangers, even as the effects on the climate have become harder to overlook. And governments have made placatory noises while doing nothing meaningful to reverse the collision course humanity is on with the planet.

That was underscored by the British government’s recent decision to issue more than 100 new licences to drill for oil and gas in the North Sea. Officials are also drafting legislation to remove 570 European Union-derived protections on the environment.

Britain’s new prime minister, Rishi Sunak, even announced his intention to bow out of Cop27, arguing that “domestic challenges” with the economy were more pressing, before international pressure forced him to relent and go. Predictably, his speech at Cop27 was short on specifics or commitments.

These are the UK’s responses to the growing chorus of alarm from expert bodies. Last week the United Nations warned that, even assuming industrialised nations stick to pledges to cut emissions, the world is heading towards a 2.5C rise in temperatures and catastrophic climate breakdown.

Civil disobedience is a symptom not of the climate crisis – nature won’t listen to the protesters – but of the inaction that continues to be the default position of governing political elites, as well as the billionaire-owned media that is supposed to serve as a watchdog on their power.

For that reason, criticism of the protests has missed the point. The activists aren’t trying to win elections – they are not engaged in a popularity contest.

Their goal is to disrupt narratives and mobilise resistance. That requires building consciousness among those parts of the populace more receptive to their message, swelling the ranks of activists prepared to take part in civil disobedience, and making life ever harder for things to continue as normal.

The activists aren’t trying to win elections – they are not engaged in a popularity contest. Their goal is to disrupt narratives and mobilise resistance

Such a programme was bound to provoke a backlash, most especially from political and media elites but also from parts of the public. It is that backlash – one that demands respect for effigies of the royal family or works of art above the survival of our species – that challenges current social norms.

The protesters have a huge task ahead. As the climate turns nastier, they need to harness public attention not only towards the causes but towards the true costs of reversing course – in the face of relentless misinformation and greenwashing from big business and government.

The establishment media is playing a crucial part in twisting social and political priorities. Every time it focuses on the inconvenience caused by the climate protests – or the potential risk of someone dying in an ambulance caught in a hold-up – it is downplaying what are already the tangible, lethal consequences of the climate emergency.

Large parts of the globe are already suffering. In Nigeria, many hundreds have been killed by recent flood waters, and more than a million forced from their homes. In the summer, a third of Pakistan was inundated by unexpectedly heavy rainfall. After visiting Pakistan, Guterres observed: “We have waged war on nature, and nature is striking back, and striking back in a devastating way.”

Nonetheless, the claim that there is widespread antipathy in Britain towards acts of civil disobedience on the climate is greatly overstated – and by the very same media outlets determined to play down the climate crisis.

An opinion poll published last month shows that two-thirds of Britons actually back non-violent protests to protect the environment – at a time when the mass media suggests climate activists have become pariahs.

Although Jonathan’s posts are freely accessible, they are reader-supported. If you liked this one or any of the others, please consider sharing it with friends and making a donation to support his work. You can do so by becoming a paid Substack subscriber, via Paypal or his bank account, or alternatively setting up a monthly direct debit mandate with GoCardless. A complete archive of his writings is available on his website. He’s on Twitter and Facebook.

Branko Milanović – How modern bombings look: The bombing of Belgrade in 1999

In its bombing strategy the US/NATO decided that civilian targets were legitimate, causing many non-combatant deaths, among them media colleagues Branko Milanović is an economist specialised in development and inequality. His newest  book is “Capitalism, […]

Branko Milanović – What is wealth?

What are the elements of wealth and how do you give them a value? Branko Milanović is an economist specialised in development and inequality. His newest  book is “Capitalism, Alone: The Future of the System […]