Jorge Amar is a Research Scholar at the Global Institute for Sustainable Prosperity and the president, and founding member of, the Full Employment and Price Stability Association (APEEP) in Spain. He also edited and participated in Spanish translations of MMT texts, including Warren Mosler’s Seven Deadly Innocent Frauds and Bill Mitchell’s Eurozone Dystopia. 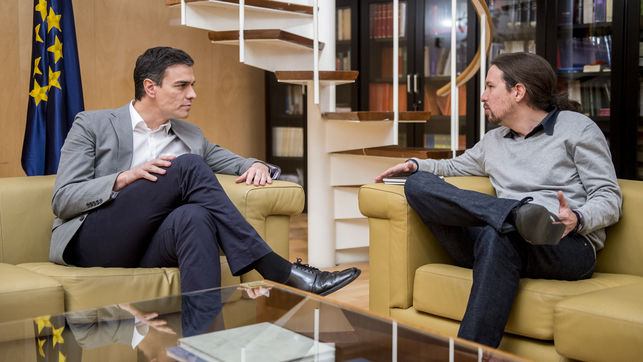 In main stream media the talks to establish a coalition government between the Spanish Social Democrats PsoE and left-wing Podemos have been described as a failure, and in that sense they might be right, that is if the intention of the talks had actually been to set up to achieve a coalition government between the two. However following recent elections, which the Social Democrats won, they were confronted with the sobering fact that they were far from obtaining enough deputies necessary for an absolute majority. Thus acting vice-president of the government (bu tno a member of the PsoE), Carmen Calvo, announced the intention of the PsoE to govern alone to avoid ceding any power to left wing Podemos, which could result in its burnishing its leftist credentials . In other words the Social Democrats were never truly interested in a power sharing coalition with Podemos despite their public declarations to the contrary.

Following the ousting of the conservative Popular Party from government with a vote of no confidence supported by Podemos and others in 2018, the PsoE successfully agreed a political pact with Podemos without ceding them any ministerial posts. Following the recent elections, they hoped to repeat this success. They tactically employed the recent negotiations with Podemos not in good faith, but as an offensive weapon to discredit its competitor on the left, hoping to blame them for the the collapse of the talks. In this respect, the analysis of the former member of the Federal Committee of the PsoE, Jose Antonio Pérez Tapias, who left the party in 2018 made clear the tactical nature and the real objective of the talks on the part of the Social Democrats, who he knows only too well. “The secretary general of Podemos (Pablo Iglesias) with his rejection to form a coalition government with the PsoE , pre-empted the media condemnation that the PSOE was already preparing to blame him for a pact that would be unacceptable for any party – the PSOE never wanted this coalition before nor really wants it now, unless purely political interests leads the PsoE to accept the conditions of Podemos. ”

This intention to sabotage the negotiations between Podemos and the PsoE become evident when the government vice-president, Calvo, declared to the media: “We have had the fairness not to leak any details of the current talks with Podemos. We have not revealed a single thing throughout the negotiations to ensure their success”, then to turn round and surreptitiously provide the media with the documents of the proposals received by her office from Podemos.

That Podemos has stoically accepted this farcical political theatre in hope of carrying out the leftist policies that the country urgently needs, does not speak well for its political abilities and reveals much of its naiveté and amateurship. However, there have been some exceptions among the leaders of Podemos, such as Miguel Urbán who, keeping his eye on the ball, had pointed out the neglected detail of how to implement the proposed social policies despite the current government spending ceiling and the EU “fiscal compact”. It was clear to Urbán that increases in public funding for education or in the fight against the climate change, housing shortage, etc, will be mere empty gestures without budgetary endowment, given that exceeding the fiscal framework imposed by EU rules is absolutely out of the question for the PsoE. 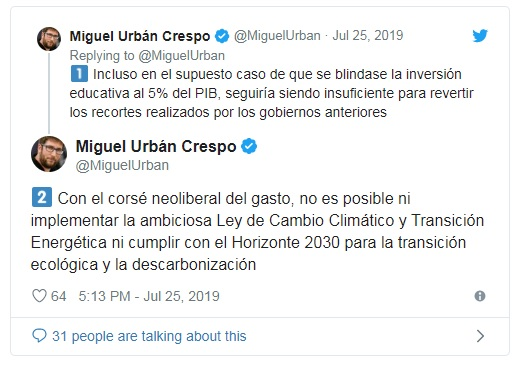 1) Even if educational investment was pegged at 5% of GDP, it would still be insufficient to reverse cuts made by previous governments

2) With the Neo-liberal spending corset, it is neither possible to implement an ambitious Climate Change and Energy Transition Act or comply with Horizon 2030 for ecological transition and decarbonisation

In the end, neither the programmatic compromises offered by Podemos with respect to the repeal of the labour reform, nor on territorial issues (especially the self-determination of Catalonia) or the indexation of pensions, or the acceptance of the the PsoEs veto of a ministryoffice for the head of Podemos, Pablo Iglesisas, were enough for the Social Democrats. The PsoE’s refusal to give anything with significant content to garner Podemos’s support has become clear throughout the talks and has attempted to force that support through blackmail that Podemos’s political policies made a centre-left government impossible and stoking fear in Podemos because the most recent polls predict an even greater loss of votes for the party should the coalition talks fail and the elections have to be repeated.

In her latest public statement, the government vice-president Calvo has reiterated that “(already) there is no future in that direction” () which only returns to the starting point, reaffirming the desire of the PsoE not to govern in coalition with the Podemos, even when Podemos maintains the willingness to continue negotiating).

If you like this kind of article and want to see more writing free of state or corporate media bias and free of charge, please donate to BRAVE NEW EUROPE here. We welcome your support.

Branko Milanović – Darkness that illuminated the world: Italy by Braudel

A brilliant weekend read for those interested in economics and culture. Branko Milanović is an economist specialised in development and inequality. His newest  book is “Capitalism, Alone: The Future of the System That Rules the […]

This is a further report from the UN climate talks in Bonn, which we have been featuring in BRAVE NEW EUROPE By Chloe Farand Cross-posted from DeSmog UK   The UK government has been accused of “double standards” […]