Following last week’s general election in Norway, the centre-right government will step down, replaced by a left-wing coalition. Climate policy was an important feature of the campaign, but if this was indeed the first “climate election”, the results are disappointing. The end of oil remains beyond the political horizon, and there are important lessons for environmental activists and politicians about society’s reactions to the proclaimed state of climate emergency.

Kacper Szulecki is a researcher at the Department of Political Science, University of Oslo, and a research professor in the Center for Energy Research at the Norwegian Institute of International Affairs 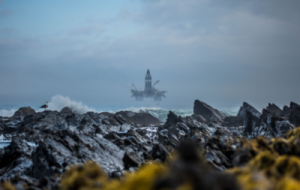 The social democratic Labour Party has won a plurality of 26.3 per cent, translating to 48 out of 169 seats in the Norwegian parliament – Storting. Labour’s chairman, Jonas Gahr Støre, will now try to form a government, and his most likely coalition partners are the agrarian Centre Party, and the Socialist Left (member of the Nordic Green Left Alliance), with 28 and 13 seats respectively. Although the result was hailed as a victory of the Left, the coalition’s 89 seat majority is slim, and Labour has actually lost a seat and 1.1 per cent of support since the 2017 election.

The election was not so much a triumph of the Left as a defeat of the Right. The ruling Conservative party led by the incumbent prime minister Erna Solberg lost nine seats, and the populist right-wing Progress Party a further seven, while the Christian Democrats sunk below the electoral threshold (they keep three seats) and only the Liberal party, a centrist force with one of the strongest environmental agendas in the Storting, managed to hold on to its eight seats.

Add to this the historic result for the far-left Red Party (eight seats) and the Greens tripling their parliamentary presence (albeit from a mere one seat before) and you might see the unusually fragmented parliament, with as many as 10 parties, as great news for Norway’s climate ambition.

Norway’s parliamentary election campaign was widely proclaimed as a “climate vote”. Indeed, the question of oil and gas phase out and emissions reductions was dominant, and all parties were forced to take a stance. Some – notably the Greens, Socialist Left and Liberals – made cutting emissions part of their main promise to the voters. Others, that is the climate-sceptic Progress Party, as well as the openly denialist fringe i.e., the Capitalist Party and the Democrats, made opposing the climate folly their central platform.

However, the important political shifts took place in between these two extremes. The agrarian Centre won many of the Progress Party voters but has also adopted an important chunk of the populist agenda. This includes a reluctance to commit to any ambitious climate policy that might impact the rural electorate’s lifestyle. What that entails for environmental policy is evidenced by a controversy that occurred in 2020. When the World Wide Fund for Nature (WWF) began a campaign to protect Norway’s minuscule wolf population, this caused a backlash in several farming and shepherd regions, a consumer boycott of a clothing company that supported WWF, and a regional boycott of an annual charity fundraiser organised by the national TV – where WWF was a partner. The fact that the Centre Party caters for those same constituencies, has some in the climate movement worry about their power in the new government.

Meanwhile, even though both the Conservatives and Labour now talk a lot about their commitment to mitigating climate change, their policy proposals are almost identical, and include indefinite protection of the domestic oil and gas sector from any “radical” moves that might harm its interests.

So, if we have really witnessed the first democratic election held under the looming threat of the apparent climate crisis, the results are worrying. The two most pro-environmental parties, Greens and Liberals, managed to secure merely 11 out of 169 seats in the parliament. Overall, parties supporting an accelerated transition away from Norway’s reliance on oil and gas barely gathered 20 per cent of the vote. Despite their increased visibility in the media and a surge in membership, the Green Party was not able to cross the 4-per-cent electoral threshold to gain a share of the proportionally distributed seats. Its 3.9 per cent result is a disappointment not just for the party leadership, but for all sympathetic observers.

Instead, faced with increased pressure on decarbonisation and the proliferation of the climate crisis rhetoric, the public opted for either openly climate-sceptic parties or a mainstream whose response position on climate policy can be characterised as “yes, but…”. 64 per cent of the ballots were cast for parties that neither explicitly question the need to act on climate change, nor intend to actually take costly steps in that direction.

To be fair, Norway is a hard case for political environmentalism. Unlike most European countries, it is not dependent on fossil fuels for its domestic electricity production, which is based primarily on hydropower. This also means that there is no low hanging fruit of domestic emissions reductions in the Norwegian case, and reductions have to be achieved closer to the individual citizen – in household heating, transportation etc. Meanwhile, the production of oil and gas at the Norwegian Continental Shelf makes a significant share of Norwegian CO2 emissions, and Norwegian hydrocarbons, exported and burned elsewhere, can contribute with as much as 500 million tons of CO2 per year, according to Friends of the Earth Norway. Unfortunately, the petroleum industry also makes an even more significant contribution to the Norwegian economy and welfare: some 18 per cent of GDP and 62 per cent of total Norwegian exports in 2018.

This makes ambitious climate policy immediately controversial, and oil phase out a taboo. A recent policy change introducing new and higher road tolls, aimed at pushing some cars out of Norwegian cities and incentivising a switch to electric vehicles, public transport, and bicycles, has spawned a country-wide protest movement which mobilised new constituencies. The climate-sceptic Facebook group, pompously named the “Popular uprising against the climate hysteria” has over 160,000 members in a country of 5.3 million, while the counter-initiative (“Popular uprising against the popular uprising against climate hysteria”) counts only some 120,000. This social media civil war continues. When in August this year, environmental organisations launched a “Climate roar 2021” initiative, a joint online roaring “challenge” in response to the newly published IPCC report, the supporters of Norway’s oil and gas sector quickly established an “Oil roar” group that gathered 200,000 supporters in mere four days.

The next phase of climate politics

As the energy transition across Europe enters a new phase, this is a warning for climate activists and green-leaning politicians in other countries. We should brace ourselves for new forms and directions of political resistance to increased climate policy ambitions. They will no longer be only the good old climate denialist folk, and they will not be the “usual suspects” among the populist and far-right. Instead, the biggest challenge for meeting the Paris Agreement’s targets and reaching carbon neutrality might come from the centre-left, who traditionally and justifiably puts labour’s interests first. Societies are likely to emphasise “just” over “transition” in a “just transition”, opting for slower pace, moderation, and economic guarantees. Faced with such concerns about livelihood, the “climate crisis” rhetoric can turn out to be counterproductive.

As tensions grow and the political debate fires up, larger parts of the electorate may opt for safer, more stable, and “rational” policies. At the same time, observers of global climate politics, like Michael E. Mann in his recent The New Climate War suggest that as the world continues on a pathway to 3 degrees warming, delay is the new denial.

Labour politicians boast about their commitment to tackling the climate challenge, while ridiculing what they see as unconstructive radicalism of the Greens or the Reds. Closely tied to the country’s largest trade union confederation (over a half of Norway’s workforce is unionised), even the most visibly pro-climate among them tend to adopt the oil industry’s internal viewpoint as the objective one. In a mindset where oil and gas are part of the solution to the climate crisis, no wonder there is no talk of a phase out even by 2050.

However, there are important tensions over the future of oil even within the Labour Party itself, and in the new coalition Labour will have to negotiate with the strongly pro-climate Socialist Left, and brace for hard bashing from the left (Reds) and centre (Greens and Liberals).

The first policy issue on the way to an eventual transition away from oil and gas is that of new exploration licenses in the North, Norwegian and Barents Seas. Labour mainstream and Centre Party want to continue granting them, arguing that only an industry that continues to develop will have the momentum to transform towards green alternatives. The Socialist Left, as well as the Greens, Reds and Liberals want an immediate stop. They lack a majority, but a faction within Labour opting for that solution, as well as Socialist Left’s leverage as a swing voter in the coalition can play a role.

But there are also climate policy repercussions beyond the future of Norwegian petroleum. Those hoping for Norway’s contribution to the European energy transition through market integration, increased interconnectivity, and the role as a potential “green battery” will most likely be bitterly disappointed too. If Centre and the Socialist Left disagree on oil, they agree on a strongly Eurosceptic position, and hostility towards increased power imports and exports. There is also a visible consensus among most parties that onshore wind energy in Norway must be limited or stopped altogether. This is unfortunate, as Norway’s contribution to continent-wide decarbonisation through its renewable potential could be more significant than any domestic emissions reductions likely to occur in the short and medium term.

This is something very basic we need to understand if we wish to stop climate change. Simple solutions are often simple because they are wrong. Energy efficiency will lead to a reduction of energy consumption […]

Russia’s war in Ukraine, in addition to being a human tragedy, represents a challenge for the global economy. It calls into question monetary policymakers’ strategy since it will simultaneously harm growth and put upward pressure […]

Gender quotas can increase the representation of women on corporate boards, but do they also encourage broader attitude shifts within a company?  Audrey Latura is a Visiting Fellow in the Department of Government at Harvard […]