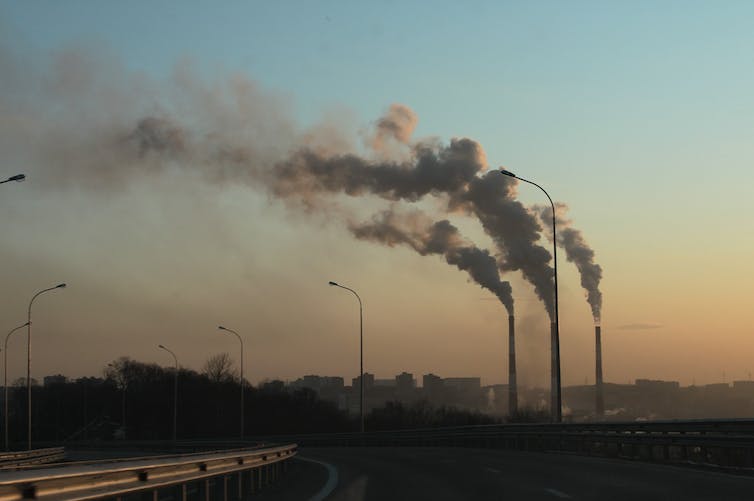 The UK has set ambitious net zero targets, but is overlooking its imported emissions.  Digifly840/Pixabay

Assessments of the UN climate conference COP26’s success have been mixed, but none have been entirely positive. Achieving the Paris agreement’s target of limiting global warming to 1.5℃ above pre-industrial levels is a goal described by UN secretary general António Guterres as “on life support”, whilst reports in the wake of the conference suggested that the world is on track for “disastrous levels” of global warming.

The response in some quarters has been to call for tough new targets, yet as the chief executive of the UK’s Climate Change Committee noted, this is likely to simply “widen the gap between ambition and delivery”.

This problem cuts to the core of rich nations’ efforts to tackle climate change. The announcement of its sixth carbon budget in April 2021, for example, saw the UK commit to reducing carbon emissions by 78% compared to 1990 levels. As the government claimed, this “sets in law the world’s most ambitious climate change target”.

But these targets will never be able to properly challenge the climate crisis without first tackling the implicit “carbon colonialism” that underpins the UK’s approach to climate change. Here, carbon is measured according to a two-tier system: rigorously within UK borders and far less carefully outside them.

This approach to the country’s carbon footprint makes little sense in the face of the worldwide problem of climate change. Around 22% of global carbon emissions are caused by producing goods, like clothes and electronics, that are actually consumed in a different country. The UK is a notable consumer – in fact, the third highest globally – of “imported emissions” like these. Nevertheless, climate targets set by the UK government focus on reducing emissions from within the country.

Currently, UK laws regulating emissions only apply to domestically produced products, whilst imported products are subject to voluntary standards – meaning the companies that make them don’t have to accurately report their emissions. This encourages “outsourcing” of emissions overseas. The dirtiest and most carbon intensive industries, such as fast fashion and construction, are transplanted to developing countries like India, Bangladesh, Sri Lanka and Cambodia.

UK companies that wish to appear green can then more easily make claims of “zero deforestation” or “zero waste to landfill” in their supply chains – even if they’re untrue – since lack of enforcement in these countries means many claims go unchecked. The human and environmental exploitation associated with cobalt mining for phone parts in the Democratic Republic of Congo is a chilling example.

There’s another complication. It’s hard to assess the true extent of international supply chains because they’re inherently murky. They cross borders, usually involve multiple companies, and are measured differently between countries. That makes calculating the emissions in these chains politically and technically challenging.

However, UK laws don’t offer any incentives for those involved in supply chains to detail the complex processes, and people, involved. This means that many supply chains are reported to both government and consumers in a highly simplified way, allowing companies to appear more compliant with emissions targets than they are.

This practice hides the true distances travelled by raw materials in the chains, as well as the real environmental impact of what they’re used to make. The clothing industry offers an example of this problem – even industry leaders such as Stella McCartney admit that tracing the provenance of material used to make their clothes is “extremely difficult”.

This system needs a serious overhaul, particularly in light of the government’s announcement that emissions from shipping will form part of the UK’s net zero commitments. In the case of the clothing industry, current assessments of the length of shipping supply chains – and therefore the emissions they produce – are enormous underestimates.

If the UK is to achieve its carbon commitments, there needs to be better regulation of its supply chains – and less reliance on voluntary reporting of what goes on within them. And to truly tackle the climate crisis, we need to address the carbon colonialism that continues to influence environmental policy. Our environmental footprint does not begin or end at our borders: neither should the way we measure it.

Next Generation EU funds: conditionality has been reintroduced through documents produced by the unelected European Commission Stuart Medina Miltimore is an economist. He is a founder of the Spanish Association Red MMT and has contributed […]

The pandemic has turned some economic assumptions upside down. Andrés Velasco is Professor of Public Policy and the Dean of the School of Public Policy at LSE Cross-posted from the LSE-Blog Economists have never experienced […]

Facebook engaged in an elaborate bait and switch on user data: privacy disappeared along with its competitors. Laws governing competition could change that. Dina Srinavasan is a former technology entrepreneur  Cross-posted from The Institute for […]