Be it a government deficit, inflation, or too much democracy, austerity is always the policy of choice for neo-liberals.

Inflation is a concept most people are now unfamiliar with. Unless you were economically active 30 or more years ago you simply have not experienced anything but the mildly beneficial effects of very low levels of inflation. And now it is suggested that the issue is back on the economic agenda.

So let’s be clear about what inflation is. Inflation is generally defined as a general increase in prices and a consequent fall in the purchasing value of money.

There are good reasons to question whether we have inflation on the basis of this description at present. Some big-ticket items are undoubtedly suffering inflation as a result of some supply chain shortages when there is excess demand post-Covid. Second-hand cars and some furniture have been examples of that. Food has also faced this issue, in part. Other price increases are external shocks. The increase in gas prices reflects this. So far these external shocks have not resulted in a general increase in prices: the fear is that they might.

Bue before we get excited about this some data helps. This is UK inflation since 1989 when the measurement of inflation moved to the consumer prices index:

There are a number of things to note. The first is that on average inflation is below 2.5%. And when it has gone above that rate since 1993 the rate has always fallen pretty rapidly back to below that level.

This is not an aberration. This is a chart of UK inflation since 1750: 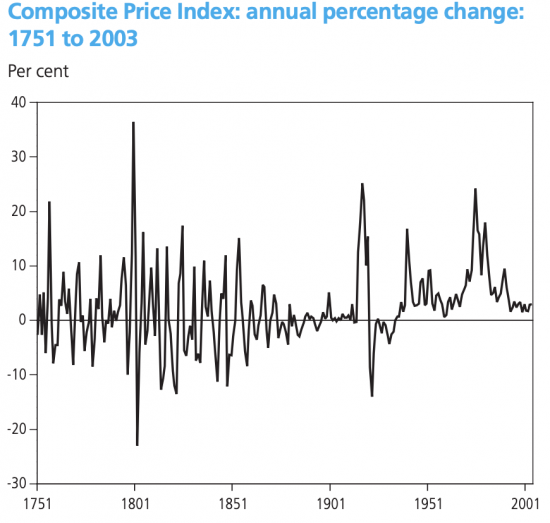 As the evidence of the previous chart shows, the line continues almost flat after 2001. We have in that case had the longest period of price stability in UK history. But what is apparent is that whenever there has been an inflation hike there is always very soon afterwards a substantial fall. Too often that actually resulted in deflation – which discourages economic activity. Thankfully, we now avoid that. But there are three key issues to note, and I will concentrate on more recent history whilst nothing the longer trend.

First, the UK has never had hyperinflation, which is often thought to be 50% inflation a month. So any discussion of inflation of that sort is ridiculous in the context of the UK economy.

Second, the broad trend of inflation is towards stability.

Third, looking at the last century any significant inflation has only been associated with war or serious related shocks. The three major events are the first world war, the second world war and the 1973 oil price shock that came after the end of the gold standard. Anything else – such as that which related to the departure from the European Exchange Rate Mechanism in the late 1980s and early 1900s, came from the failure of government foreign policy.

The simple fact is that inflation does not happen for reasons resulting from UK domestic economic policy: they are foreign policy events. It could, of course, be said that Brexit is another example of that since the supply chain disruptions that are now contributing to price pressure are undoubtedly related to that. I do think there is logic to that claim. But it’s also fair to say that the forecast inflation spike – at 5% – is very small by historic standards. What is more, just as all forecasts suggest, and as historic data agrees to always be the case, soon after that spike happens as a simple matter of fact that inflation will go away again. The way that inflation is calculated almost guarantees that.

So we need to worry about inflation then? First, let’s take the government’s concern that this will increase its cost of paying interest on the national debt as a result of interest rises. Here Jo Michell has done some useful work. As he notes: 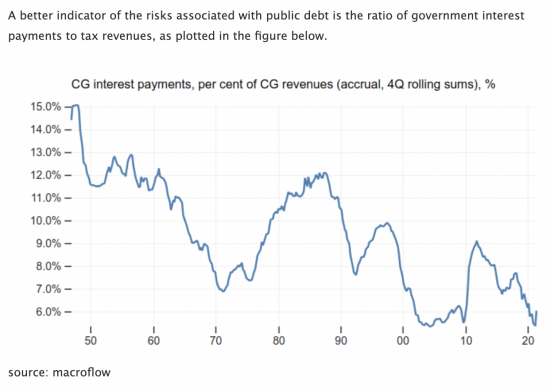 Note that we are at near enough record low levels of overall interest cost to the government.

As the also notes:

Interest payments on government debt have indeed risen recently. A spike in June triggered media articles about the highest interest payments on record. In context, such statistics are shown to be meaningless. Interest payment have risen to around 6% of taxation over a four quarter period, compared with all-time lows of about 5.3%. (Calculated on a 12 monthly basis this rises to around 6.5%). It is hard to see signs that the sky is falling.

And as he adds:

In fact, this indicator overstates current interest costs. This is because much of the interest paid by the Treasury is paid to the Bank of England which holds a substantial chunk (currently around 37%) of UK government debt as a result of QE (see chart below). Most of this interest is returned directly to the Treasury. Since the start of QE, this has saved the Treasury over £100bn in interest costs.

Even if interest rates go up there is actually no reason why interest costs on this quantity of debt owned by the government need go up: the Bank of England need not pay base rates on the central bank reserves accounts held by UK clearing banks with the Bank of England as a result of QE: the existing rate could be maintained if desired and there is literally nothing those banks could do about it. Why they need a windfall gain of billions from an interest rate rise is very hard to work out and anyone having the political courage to oppose them would seem to me to have an open political goal to aim at by opposing that benefit going to banks.

In other words, this need not have any significant impact on government spending, But, if it does, then the only impact it should have is in increasing the pay of civil servants and other public employees to protect them, as pensioners will be. Other benefits should obviously also rise as well. That would be right. Paying banks would not be. That apart there is no reason for inflation to have an impact at this moment. 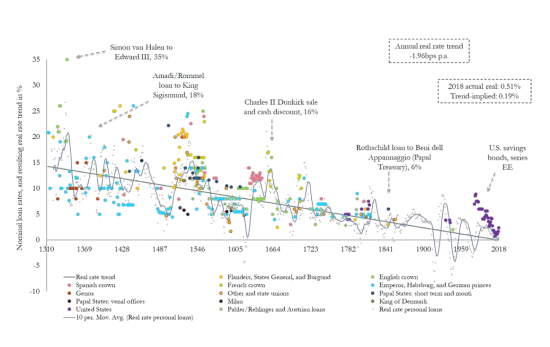 The data is from the Bank of England. The strong, long term trend in interest rates is downward. It’s now around zero. That is one very good reason why inflation is no longer an issue. But the only question is, might that change? That is an issue for another blog, but for now my suggestion is that nothing changes that at this moment. And I stress, that means that there is no reason why the current trend may not be towards negative rates. But discussing that is for another blog.

At this moment the conclusion is clear: any inflation risk now is very small and will reverse. Increasing interest rates is not necessary now. This inflation will, in any event, go away soon and all the increase will do is shift income to those already best off in society – including banks themselves. The government needs to protect its employees and those on benefits from this price change. But that apart, this inflation does not require government reaction. Austerity and interest increases are not in any way required. If they happen then they should in that case be read for what they are, which is the pure politics of upwards redistribution of wealth.

“We need to be brutally honest: What is taught in today’s graduate programs as macroeconomics is entirely useless for the kinds of questions we are interested in.” J. W. Mason is Associate Professor of Economics […]

Positive Money Europe – ECB announces new giant subsidy for banks – but why would it work this time?

In response to a reduction of growth and inflation prospects for 2019, the European Central Bank (ECB) announced new long-term subsidized loans for banks. But why would it work better this time? By Stan Jourdan, […]