What Richard Murphy so aptly addresses is a gap in understanding within the British Left (the left of most other nations have no idea of this discussion) of a very simple, but crucial point concerning state finances. While the traditional left tries to justify spending by showing how expenditures will be financed by taxes, a number of progressive economists have been trying to explain that taxes do not pay for, nor are they supposed to pay for, government expenditure; that is the function of government borrowing: by borrowing from their own Bank, the Bank of England, or from capital markets. This was brilliantly explained in a recent article by Ann Pettifor (read here). This may sound like an academic dispute, but it is anything but that. The myth concerning tax paying for government expenditures is just as destructive as the myth that austerity promotes economic growth. It took years to debunk this lie in Britain, and still is mainstream opinion in most European nations. This is the one of the next two major intellectual hurdles the Left has to overcome, the other being that economic growth is not compatible with sustainability.

Tax Justice UK has issued a new report this morning: 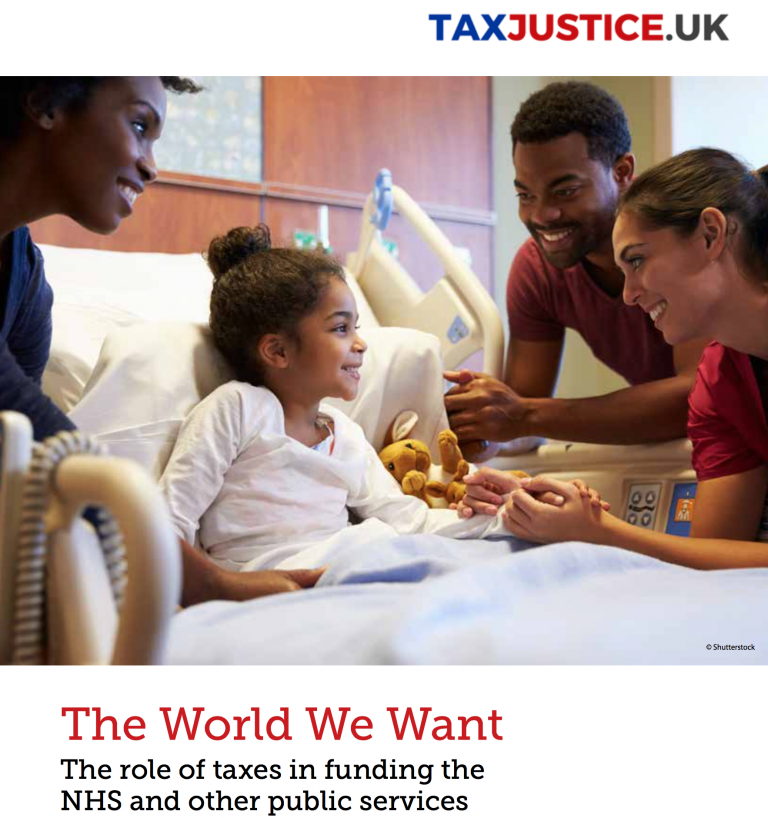 As they say of it:

The World We Want is a new report that sets out how the government could find the £20 billion a year extra it has promised for the NHS by raising taxes on wealth.

The suggestions are summarised in this pie chart: 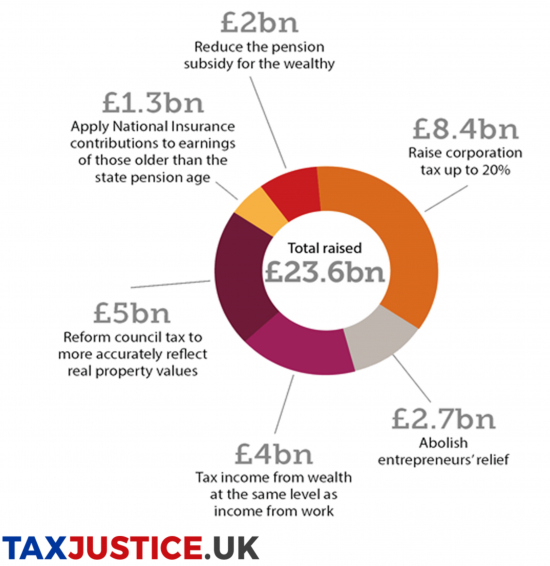 The premise of the report is that: 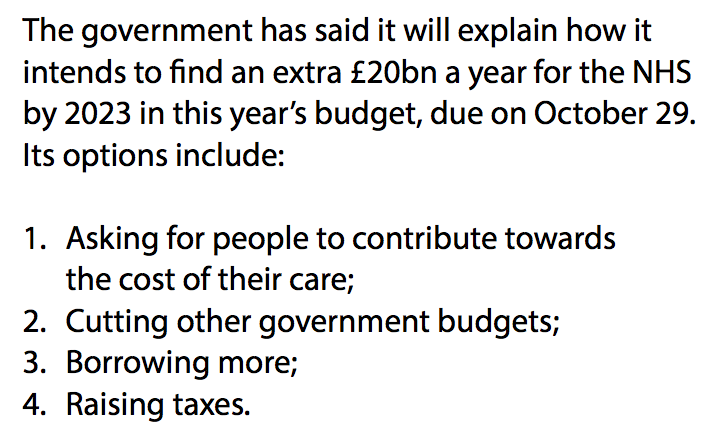 And whilst I am on the one hand delighted that Tax Justice UK is challenging the right wing on these issues  I admit that I am also quite conflicted by what it is saying.

The simple reality is that the premise of the report is wrong. The way to fund £20bn of extra healthcare spending is for the government to create the necessary funding for that purpose. And it can do this at any moment. The fact is that tax does not precede spend. It is always, and inevitably, true that spend precedes tax.  In that case the hypothesis that extra tax must be raised before the NHS can be funded is incorrect. What actually happens is that if the government spends an extra £20 billion into the economy, and increases GDP directly as a result (because government spending is part of GDP, because it creates wealth) then  the government can, if it so wishes, claim back some, all, or even more of that spend in tax  if it so wishes,  with the possibility that it might claim back more than is even spent being made possible by multiplier effects, which are quite high in the case of NHS expenditure.

What it is important to stress though is that the reason to make that claim back by way of tax would not be to fund the NHS.  That would make no sense at all, because the NHS would have already been funded: the expenditure does that. So the reclamation of that spend by taxation has to be for some other purpose. It may be to control inflation. It may be to reduce inequality i.e. taxing those with more than others simply for social purpose. Or it could be as part of the policy to control carbon use. And it may be for the delivery of some other government policy. But the funding of the NHS will not actually come into the equation. That problem is solved the moment the government decides to create the money to make the payment to provide the additional resources the NHS requires,  as it may at any time because all money creation is ultimately under its control.

And I also stress that the government could choose not to tax and still not run a deficit: ignoring the fact that QE  could fund all current deficits with ease is just technically wrong  now that we know that it is possible.

Putting all this together, what Tax Justice UK is arguing, in my opinion, is that if  £20 billion of additional expenditure on the NHS is required, and if the government insists that this should not change its overall deficit, then socially appropriate choices have to be made on the taxes that will be used to recover the expenditure made and the program that they have laid out appears to be one that is entirely socially appropriate.  I can support it for that reason,  but I  have also to say that the time is coming when the tax justice movement has to recognise the realities of the economics of spend and tax.

‘Climate finance’ commitments are woefully inadequate while inequalities in currency power force Global South countries to extract environmentally costly goods, and export them to the Global North. To end the outsourcing of emissions and remove […]

ETUC analysis finds food delivery companies Deliveroo and Glovo meet all five of the EU Commission criteria for their workers to be considered employees, but Deliveroo describe the analysis as “incorrect and misleading” The Gig […]