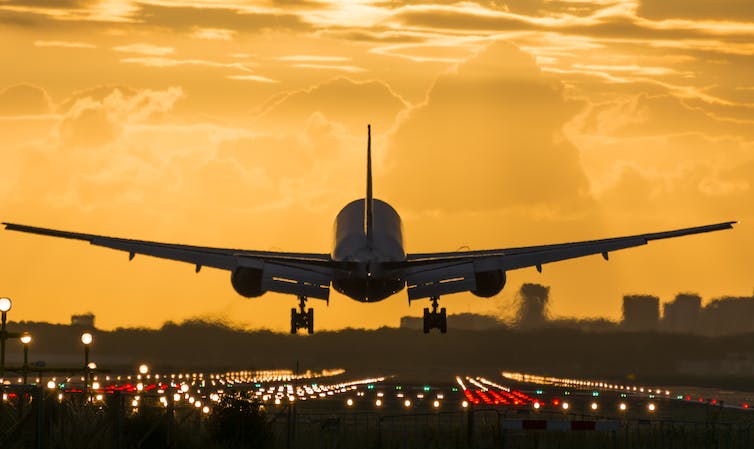 The flight shaming movement has raised our awareness of air travel’s contribution to climate change. With all the discussion, you might be surprised to learn that air travel globally only accounts for about 3% of the warming human activities are causing. Why all the fuss?

Before I explain, I should come clean. I am writing this on the train from Christchurch to Kaikoura, where I will give a talk about my recent book #NoFly: walking the talk on climate change. I have some skin in this game.

Taking a train around New Zealand is no mean feat. In the North Island, the train between Auckland and Wellington runs only every second day. If you get off at a stop along the way, you have to wait another two days to continue your journey. You can catch a bus, but you’ll spend that bus journey fantasising about the possibility of an overnight train service.

So why do it? A good deal of global carbon emissions come from industrial processes or electricity generation under the control of governments and corporations, rather than individual citizens. For many of us, a decision not to fly might be the most significant reduction in emissions we can make as individuals.

As Swedish climate activist Greta Thunberg has shown, refusing to fly also sends a powerful signal to others, by showing that you are willing to change your own behaviour. Politicians and corporate sales departments will take note if we start acting together.

Aviation affects the climate in a variety of ways.

Because any carbon dioxide you emit stays in the atmosphere for hundreds of years, it doesn’t matter much whether you release it from the exhaust pipe of your car at sea level or from a jet engine several kilometres high. Per passenger, a flight from Auckland to Wellington will put a similar amount of carbon dioxide into the air as driving solo in your car. Catching the train will cut your carbon emissions seven-fold.

Ozone and methane are both greenhouse gases, so this chain of chemical reactions can lead to both heating and cooling effects. Unfortunately the net result when these processes are added together is to drive more warming.

Depending on the atmospheric conditions, aircraft can also create contrails: clouds of tiny ice crystals. The science is not as clear cut on how contrails influence the climate, but some studies suggest they could have an effect as significant as the carbon dioxide released during a flight.

There is also considerable uncertainty as to whether aircraft exhaust might affect cloud formation itself – this could be a further significant contribution to warming.

Offsetting, by planting trees or restoring natural wildlands, will take carbon dioxide back out of the atmosphere. But we would have to do this on a massive scale to feed our appetite for flight.

Emissions from international air travel are not included in the Paris Agreement, although the United Nations has been working on the Carbon Offsetting and Reduction Scheme for International Aviation (CORSIA), which may begin to deal with these. Initially, the scheme will be voluntary. Airlines flying routes between countries that join the scheme will have to offset any emissions above 2020 levels from January 2021.

Emissions from flying stand to triple by 2050 if demand for air travel continues to grow. Even if air travel became carbon neutral through the use of biofuels or electric planes, the effects from contrails and interactions with clouds mean that flying may never be climate neutral.

With no easy fixes on the horizon, many people are thinking hard about their need to fly. This is why I took a year off air travel (alongside my colleague Quentin Atkinson) in 2018.

I have been back on planes in 2019, but I have learned how to reduce my flying, by combining trips and making better use of video conferencing.

Fly if you must, offset if you can, but – if you are concerned about climate change – one of the best things you could choose to do is to fly less.

There has been much discussion about corporations having too much influence on EU decision making. They don’t. They make the decisions as this article once again proves. By Dominic Kavakeb, Senior Communications Adviser at Global Witness […]

Heiner Flassbeck – Where Europe is Breaking Up

Germany’s Federal Constitutional Court can’t be blamed too heavily for flouting higher European law. The mindset of the country’s entire political elite needs further education on the function of sovereign indebtedness. Heiner Flassbeck is an […]