The gilets jaunes, the protestors young and old in their hi-viz yellow jackets who have risen against President Emmanuel Macron, are as active in the south as they are in Paris – with some troublesome political implications. Simon Gray, a Briton resident in France for many years, describes his recent motoring experiences in the Herault, southern France. 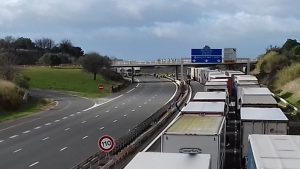 8 December 2019: The A9, principal arterial route between Italy and Spain, completely closed by gilets jaunes occupying the carriageway.

Here, in the Herault, in the Occitanie, and our beloved France in general, things are going from bad to worse. The protests have taken a decidedly ominous turn. Most of us who
have known and loved this country over many years did not see this coming or if we did, did not believe it could get this serious. And it appears that Beziers, Agde and Bessan are as much an epicentre as anywhere in France, if not more so. This is significant, though many may not agree – more on that later.

I hesitate to give this “uprising” more weight than it justifies, but over the past few days things have started to change both qualitatively and quantitatively. We first encountered the gilets jaunes on the first weekend of the protest, when we attempted a trip to the coast on Sunday November 18th. We got as far as Bessan, exit 34 from the A9 autoroute. The entire gare de peage (toll area) and its two adjacent roundabouts were occupied by hundreds of people in their high-viz yellow jackets. It was a near total blockade. There were bonfires of car tyres filled with diesel and makeshift barriers thrown across every carriageway. Nobody was allowed to enter the motorway or proceed towards the coast in any direction; all we were allowed to do was go round the roundabout and return the way we had come. It was the same for hundreds of motorists that day. And that was just the start. I hesitate to say that I felt threatened, partly because many of the demonstrators were of pensionable age! My three passengers did feel very uncomfortable, however. We returned home and awaited further news, assuming that things would blow over as they usually do and everything would return to normal. It hasn’t.

Our next encounter, in that first “hot” week, was on the two main roundabouts on the north Beziers ring-road, which we use four times daily to ferry our girls to and from college at Maraussan. Again there was a total blockade only this time the demonstrators had taken it upon themselves to manage traffic flow by forcing every motorist to wind down their window, receive some sort of instruction regarding the “rules of play” or the need to “unseat” Macron, or worse, and proceed slowly and painfully on their way. Beziers traffic at rush hour at the best of times is appalling, but now the disruption to the daily commute was monumental. Luckily I know the back country around Corneilhan, Lignan and Boujan fairly well and so, like hundreds of others, quickly adapted our journey to avoid the big roundabouts until they were cleared days later. Of the forces of order only one single Peugeot van from the Gendarmerie Nationale and its two occupants were visible. Predictably they just stood back and watched events unfold.

My wife and I climbed the ancient watchtower at Valros and watched the smoke from the blockade fires curling into the bright autumn sunlight from every point of the compass, as far as the eye could see: Frontignan, Balaruc, Sete, Bessan, Villeneueve les Beziers, Les Neufs Ecluses, Colombieres, even as far as Narbonne and La Clap. And they are still burning. On Saturday last the gilets jaunes sacked Narbonne East motorway toll area, lifting burning cars onto forklift trucks and driving them into the ticket
cabins. It was the same story at exit 33 (Balaruc) and exit 34 (Bessan) both of which sites now appear to be under permanent occupation by a rag-tag army encamped behind stockades of pallets and furniture. Every driver has to pass through a chicane of debris, answer to checkpoint “officials” and tacitly acknowledge the justice of their cause, before being allowed to proceed. And still no sign of the forces of order. Most discouraging of all we have been watching video from across France of public officials, uniformed fire officers etc, refusing to obey orders from their own commanders, instead undertaking “actions” of protest – protest at their chain of command, at the state, at Macron’s government and so on.

And potentially most sinister of all: Is it pure co-incidence that the three towns of Beziers, Agde and Bessan are regarded in Occitanie (if not all France), as being the “hot” spots, according to the media – a fact pointed out by the left-of-centre newspaper Midi-Libre (now being pilloried by the gilets jaunes)? Or that Robert Menard, the mayor of Beziers elected on the Front National ticket, has been out on the barricades blaming Macron and, along with Front National leader Marine Le pen calling for the declaration of state of emergency, dissolution of the National Assembly and its replacement by a government of national unity. Menard’s wife, by-the-way is a Front National member of the Assemblee Nationale for the Agde-Bessan constituency. (Bessan, proportionately, secured LePen one of her largest votes in any commune in France at the last presidential election). None of this in my estimation is co-incidental with the fact that  these gilets jaunes are the most militant(and aggressive) in the region.

Then yesterday afternoon, probably for the first time in its history, teargas was drifting over the streets of the normally sleepy tourist town of Pezenas after the Gendarmerie Nationale or CRS (Compagnies Républicaines de Sécurité) confronted students from the local lycees, Jean Moulin and Charles Allies, who had overturned cars and thrown up barricades near the student quarter. This weekend I’m afraid looks to be the hottest yet, on Saturday in particular, in all major cities, on allmajor routes etc. Then next week we’re entering a period of “unlimited strikes” by truck drivers, rolling strikes by energy workers and so on. This is a France we haven’t seen before, a protest fired by populism, not, as previously, master-minded by trades unions, NGOs and politicians.

What are the chances and risks facing us in the current economic crisis? Dean Baker is a Senior Economist at the Center for Economic and Policy Research (CEPR) Cross-posted from Dean’s Patreon website More Thought […]

Branko Milanović – The Problems of Authenticity Under Capitalism

It used to be called “kitsch”. Now it is called big business. Branko Milanović is an economist specialised in development and inequality. His newest  book is “Capitalism, Alone: The Future of the System That Rules […]