More than a third of the world’s plants are so rare they face extinction. In a warmer world, that would leave supplies of food at risk, two studies suggest.

Tim Radford is a founding editor of Climate News Network 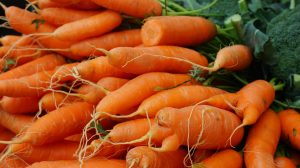 Botanists have made a new census of terrestrial plants – only to find that with nearly 40% of them rare, or extremely rare, this may put food at risk.

And a second team of researchers, in a separate study, has established that some of these rare or vanishing species could include the wild relatives of some of the planet’s most popular vegetables.

The two studies matter. The first underlines yet another reason for new and determined conservation strategies to preserve the extraordinary natural variety and richness of life – the shorthand word that scientists use is biodiversity – already under pressure from the explosion in human numbers, the destruction of natural habitats and the looming catastrophe of climate change driven by rapidly rising global temperatures.

And the second study is simply a matter of the next lunch or dinner: many rare plants are survivors with the resources to adapt to change. In a fast-changing world, crop breeders may need to go back to the wild relatives to look for the genes that will keep the commercial carrots, courgettes, pumpkins and chilli peppers on the grocery shelves.

US scientists and international colleagues report in the journal Science Advances that they worked for 10 years and compiled 20 million observational records to establish a simple plant census: the forests, grasslands, scrublands, tundra and swamps of the wild world are home to about 435,000 unique plant species.

And of this huge number, a surprising 36.5% are “exceedingly rare.” By this, researchers mean that these species have been observed and recorded no more than five times in the last 300 years of systematic botanical research.

“According to ecological and evolutionary theory, we’d expect many species to be rare, but the actual observed number we found was pretty startling,” said Brian Enquist of the University of Arizona, who led the consortium. “There are many more rare species than we expected.”

The rare species were most likely to be clustered in what ecologists call hotspots: the northern Andes in South America, Costa Rica, South Africa, Madagascar and south-east Asia.

What these places have in common is that, over millions of years, they have maintained stable climates, and as the glaciers retreated at the end of the last Ice Age, these tropical mountains and valleys provided refuge for life’s variety.

But these survivors may not enjoy a stable future, as ever higher levels of greenhouse gases are spilled into the atmosphere from human use of fossil fuels, and global temperatures continue to rise, and as human communities expand into what was once wilderness.

“In many of these regions, there’s increasing human activity such as agriculture, cities and towns, land use and clearing,” said Professor Enquist.

“So that’s not exactly the best of news. If nothing is done, this all indicates that there will be a significant reduction in biodiversity – mainly in rare species – because their low numbers makes them more prone to extinction.”

Humans depend on the natural world for survival: biodiversity – plants, fungi, mammals, birds, fish, amphibians, reptiles and so on – provides all human nourishment, most of the medicines, fuels, fabrics and textiles that warm and shelter 7.7bn people, and at the same time maintains supplies of water, air, crop pollinators and so on.

But new research in the journal Plants, People, Planet confirms once again that many of the wild ancestors and cousins of the crops that nourish billions could be at risk.

And these wild relatives – which have survived climate shifts over millions of years – represent a vital resource for plant breeders anxious to cope with rapid global heating.

The latest study confirms that 65% of wild pumpkins and more than 95% of wild chilli peppers are not formally preserved in any gene banks protected by conservation scientists.

“The wild relatives of crops are one of the key tools used to breed crops adapted to hotter, colder, drier, wetter, saltier and other difficult conditions,” said Colin Khoury of the International Centre for Tropical Agriculture.

“But they are impacted by habitat destruction, over-harvesting, climate change, pollution, invasive species and more. Some of them are sure to disappear from their natural habitats without urgent action.”

Dr Khoury and his colleagues have prepared a series of detailed maps of the range and distribution of the wild relatives of a range of important food species: the aim is to focus on the most effective kinds of protection for what, literally, could become tomorrow’s lunch in a world of rapid change.

“If they disappear, they are gone,” said Dr Khoury. “Extinction is forever, which is a loss not only in terms of their evolution and persistence on the planet, but also a loss to the future of our food.”

What looks big is sometimes less big than you think if you look more closely. Spain’s gross domestic product could well be such a pseudo giant. Why it is growing at such an incredible rate […]

The UK union GMB has signed a formal recognition agreement with ride-hail giant Uber, in what is a global first for the company, but grassroots unions which represent Uber drivers have questioned what exactly the […]