The hypocrisy of the EU is fathomless. Last week the EU Parliament voted that black lives matter, while yearly paying billions to have African refugees drown in the Mediterranean Sea, or be enslaved and tortured in Libya. While attacking the Polish justice system, as we see in this article, with Spain the EU contains one of the most iniquitous justice systems in the world.

Read PART I here The introduction is important in that is provides the framework for the whole piece. 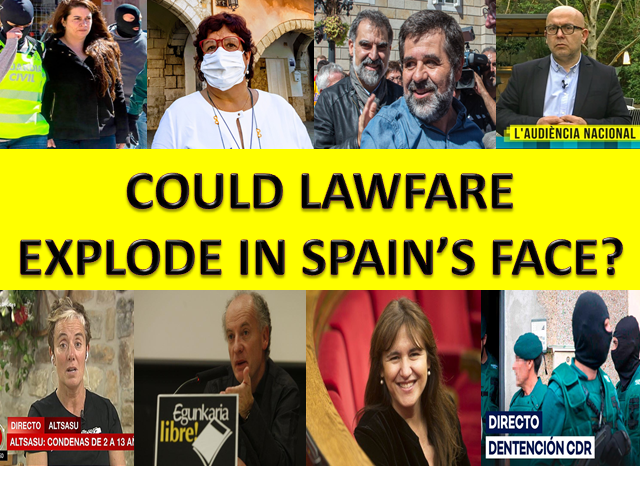 5 Tamara Carrasco. Lawfare against a whistle

On April 10 2018, a young woman called Tamara Carrasco (an activist member of the Committee for the Defence of the Republic (CDR) in Viladecans, near Barcelona) was arrested in a spectacular, much publicised GC raid on her home. She was accused of being a “member of a terrorist group”. Her case was sent on to the special court responsible for cases of terrorism: the Audiencia Nacional in Madrid.

In a search conducted at Tamara Carrasco’s home, the police were only able to find as “proof” one whistle and one mask showing the face of imprisoned activist Jordi Cuixart (a common campaigning item at the time). Tamara Carrasco was taken to the Audiencia Nacional where she was held in isolation for 48 hours. She was later released with the unprecedented measure of being confined to her home town of Viladecans. After over a year deprived of her right to move about freely, and after several Madrid and Barcelona courts refused to take on her case, Tamara Carrasco was informed that she could now move about freely though it was not made clear if she would be tried. At that time, the prosecutor was calling for a seven-month prison sentence.

Tamara Carrasco’s case is not so different from that of Madrid’s Dani Gallardo or the famous “CDR seven”. Dani Gallardo is a Madrid-based demonstrator who has been held in jail since October 2019 after participating in a pro-Catalan rally in Madrid. As for the “CDR seven”, these are republican activists who were arrested in September 2019 and were accused of “terrorism” and “holding explosives” in the Madrid press. However, these accusations were later known to have been based on fake GC reports. After months in prison, they were allowed out in dribs and drabs. From the political arena, several statements were made to the effect that CDR activity should not be labelled as terrorism, it being claimed that to treat the CDR 7 as terrorists “trivializes terrorism and offends its victims”. Can clearer cases of intimidation be found than Tamara Carrasco and the CDR 7’s?

Otamendi was the editor in 2003 of the Basque-language newspaper Euskaldunon Egunkaria founded in 1990. After ETA broke a truce in January 2000, the Spanish government began to apply a policy that came to be known as the “everything is ETA” syndrome. No holds were barred to outlaw enterprises, parties, associations or individuals found to have anything whatever to do with the Basque left-wing independentist movement. In February 2003, Euskaldunon Egunkaria was closed down by Audiencia Nacional judge Juan del Olmo. All its assets suffered state confiscation and ten members of the paper’s editorial board, including Martxelo Otamendi, were arrested and accused of forming part of a terrorist organisation. The newspaper itself was accused of forming part of an entrepreneurial group controlled by ETA. It took seven years for the Audicencia Nacional to absolve Otamendi as no proof whatsoever was found of any kind or relationship between ETA and Euskaldunon Egunkaria, a prestigious newspaper read by Basque-speakers across the board.

Yet the harm was done. The newspaper had been outlawed, suffering crippling economic losses and Martxelo Otamendi and others of his staff had been tortured and silenced as journalists. The judge’s sentence said that no proof had been found that Euskaldunon Egunkaria had been funded by ETA and saw no defence of ETA’s ideas in the newspaper’s editorials. Yet no compensation was offered when Otamendi sued the Spanish State in 2008. Finally, in 2012 – nine years after the closure of the newspaper – the European Court of Human Rights ordered Spain to pay 24,000 euros to Martxelo Otamendi for not having adequately investigated the reports he made of torture. According to the ECHR, the Audiencia Nacional had remained “passive” when allegations of torture were made. One may only conclude that lawfare makes it extremely easy to close down a newspaper in today’s EU.

Since the Catalan independence movement got under way, about ten years ago, the use of lawfare to smear Catalan candidates’ reputations or even prevent them from standing at elections, has become notorious. It was the case of Artur Mas at the 2012 Catalan Parliament elections and Xavier Trias, when he was the candidate to continue as Barcelona’s mayor. They were accused in GC reports of having illegal bank accounts in Switzerland and/or Andorra. All of this came to nothing, being quite unfounded, But the basic objective was assured: their election performance was seriously damaged. Indeed, Trias lost his post as mayor of Barcelona. Yet no GC agent was prosecuted for concocting these trumpted up reports.

Today it is Laura Borràs, a popular indy candidate, who has suffered a similar smear campaign. She was accused of favouring a designer offering services to the literary institution she ran before launching out on a political carrer. An initial report calling for her case to be investigated led two senior inspection bodies to study the case. Both exonerated her of having committed any form of illegal activity. But opting as she does to head the election ticket for Puigdemont’s party, Junts per Catalunya, she has now come under the fire of Spain’s Supreme Court, the same one that sentenced the Catalan government and two activists to jail. The prosecutor is now calling for a monstrous 15-year prison sentence for Laura Borràs for practices nearly all administrations are known to practice. Will she get a fair trial? Or will it be a lawfare trial?

At the October 1 Referendum, 1060 citizens were reported injured in Dantesque scenes that shocked TV viewers around the world. In the following days, teachers in some schools held class debates to discuss what had occurred that day. They did so as a class activity to contribute to students’ social awareness, in no case to create hate nor seek “political indoctrination” as Catalan schools were maliciously accused of in the Madrid press. In the following days, eight teachers from three schools in the Pyrenean city of La Seu d’Urgell were taken to court and accused of committing a “hate crime”.

At the root of this accusation was a GC report in which it was claimed that students at these schools had been discriminated against and persecuted – both by fellow students and staff – for being the sons and daughters of GC. The report even spoke of an aggression against one GC’s son. The same happened to nine teachers at the Palau Institute at Sant Andreu de la Barca (the location of the GC headquarters near Barcelona). Yet no proof of any such “lynching” was to be found anywhere. The only lynching recorded was that suffered by the nine teachers reported. They too were hauled before the courts and portrayed as monsters in the unionist press. Not only were their police photograghs displayed in the press but headlines such as “The 9 infamous Catalan teachers” were to proliferate. They too got the roughest of treatment. Most had to leave their jobs and even abandon the area, suffering constant media lynching for months after. As in all cases described above, the whole operation was built around the protection offered by the Spanish judiciary to a shameful use of lawfare. That is Spain’s deep State formula for eliminating opponents by portraying and treating them as enemies while the EU yawns and turns a blind eye whenever it has the chance to do so.

BRAVE NEW EUROPE gives a voice to the “unheard”, who mainstream media airbrushes from the picture, as is the case in this article. If you would like to support our work and want to see more writing free of state or corporate media bias and free of charge, please donate here.

Branko Milanović- What is the just pay? Capitalists, John Roemer, and the Cultural Revolution

This question becomes even more relevant in view of climate change and how to cut back on our use of natural resources: do we have to produce increasingly more? Branko Milanović is an economist specialised […]

Mathew D. Rose – How the EU has become an incubator for fascism

What no one is considering is that the resurrection of fascism in the EU  could well be a logical consequence of the EU’s policies of the past decades, actually stabilising the European Union and allowing […]