Climate scientists including Peter Kalmus (@climatehuman) recently shut down several small airports around the world to protest the calamitous impacts of private jet travel. Many were arrested. 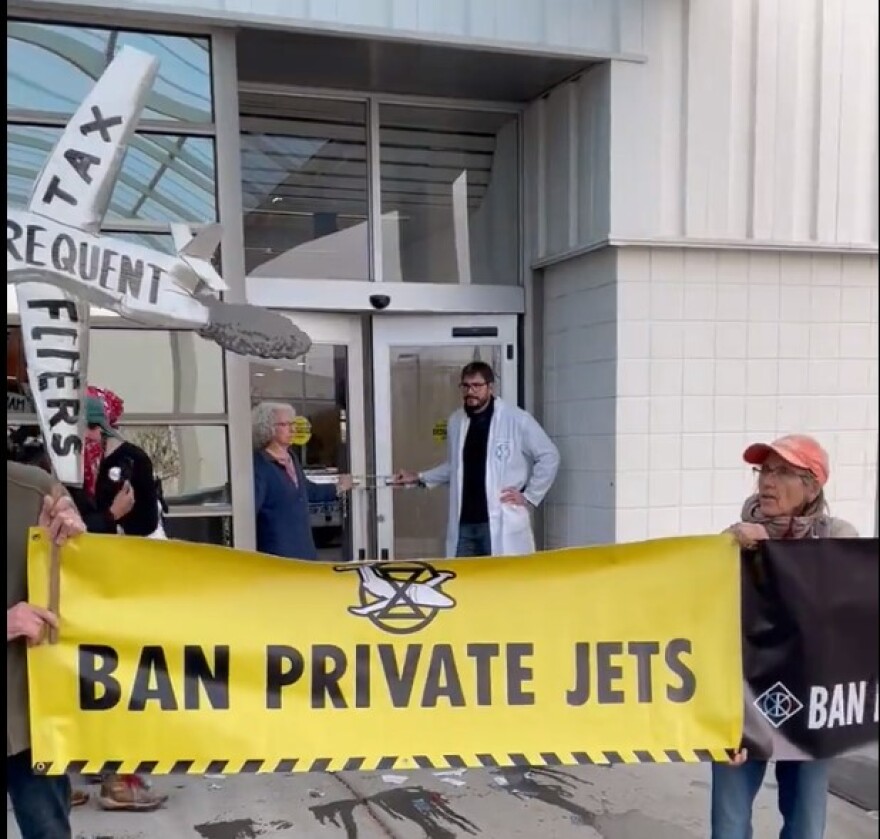 As world leaders discuss climate change at the United Nations summit in Egypt, activists elsewhere are targeting private jets and frequent flyers, which contribute to global warming. On Thursday, four people, including two climate scientists, were charged with trespassing after they chained themselves to entryways at Charlotte Douglas International Airport’s private jet terminal.

It was one in a series of protests at 17 airports around the world coordinated by a group called Scientist Rebellion.

They’re also both activists, who have recently turned to civil disobedience. Abramoff says she struggles to keep her work and her activism separate:

“Like all scientists, we were trained to maintain a type of neutrality in all things, especially when speaking publicly. As scientists, none of us claim to represent our institutions. But we do speak from a place of greater credibility because of our educational background, and because of our training in the climate sciences,” Abramoff said.

“But when we’re engaging in advocacy, we’re citizens, you know, we’re mothers and daughters, and fathers and sons and members of our community. And we have a right to say what we’re thinking, and almost a responsibility,” Abramoff said.

Thursday’s incident began around 9:30 a.m. at the airport’s Wilson Air Center for private jets, which is across from the main terminal. Abramoff and Kalmus joined two other activists — Deborah Kushner of Virginia and an indigenous activist from Florida, who goes by the name Dakota.

“Quite quickly, maybe after five minutes, about maybe 20 police showed up. And they asked us to leave,” Kalmus said. “A couple of us were actually glued onto surfaces. The other two of us were chained and we didn’t have the keys. So we basically said we would stay as long as they took and it didn’t take long because within an hour they arrested all of us.”

While chained, they did interviews and posted on social media, calling for a ban on private jets and a tax on frequent flyers.

For both Kalmus and Abramoff, it was the second time this year they risked arrest at a climate protest. Kalmus was arrested April 6 after he and other protesters chained themselves to the door of a JP Morgan Chase bank building in Los Angeles, where he lived at the time.

“That action went pretty viral, and I think raised a lot of awareness about how JPMorgan Chase is the institution on our planet that does the most to fund new fossil fuel projects,” Kalmus said.

That same day, Abramoff also was arrested when she chained herself to the fence at the White House in Washington, DC.

“We were asking the administration to declare a climate emergency, which is still ongoing, although some aspects of those demands of that group have been somewhat met by the government. You know, we’ve passed some landmark climate legislation and mobilized the Defense Production Act. So you know, there’s a lot of things to be optimistic about. But much, much more would need to be done for us to keep our planet safe and habitable,” Abramoff said.

Besides risking arrest from civil disobedience, the two activists sometimes worry about mixing their passions and their careers.

“An analogy made by another activist is that being an ecologist in 2022, is like being a scholar in the Library of Alexandria while it burns. At some point, you have to put down the books and pick up a fire hose,” she said.

Kalmus has not faced any repercussions from his job as a government scientist, but he also worries about it. When doing interviews like this he’s careful to say that he’s speaking only for himself. But he still worries.

“The first action on April 6, I thought there was a very, very good chance I’d get fired,” Kalmus said. “It just feels very weird that I have to do this, that it’s gotten to this point. But I do feel a responsibility to do all I can to raise awareness. I feel desperate. I feel like doing this for the planet, and for my kids and for young people is, frankly, more important than being safe in my career. So I do everything I can not to jeopardize my job. But sometimes there’s, you know, basically a higher calling.”

All four protesters at the airport were taken to Mecklenburg County jail and charged with trespassing. Kalmus says he has a court date in December.

Austerity: Coming soon to the EU nation nearest you. Chris Dillow is an economics writer at Investors Chronicle. He blogs at Stumbling and Mumbling, and is the author of New Labour and the End of […]

Helen Thompson – The unintended euro and the problem of Italy

If you can get past the academic veneer, this is a very interesting article. Alone that the author claims that the EU has become a battlefield between Germany and international finance on the one side, […]