Britain’s prime minister Theresa May had promised to end the “burning injustice of inequality”. Little has changed for the poor, women, and minorities.

Intersecting Inequalities: the impact of austerity on BME women in the UK

This is a summary of a cumulative impact assessment of the changes to taxes, benefits and public spending since 2010 on Black and Minority Ethnic (BME) women. The report is part of an ongoing project by the Women’s Budget Group and the Runnymede Trust to analyse the impact of government Budgets and spending reviews by gender, race and income. It was researched and written in partnership with Coventry Women’s Voices and RECLAIM.

Benefits and tax credit cuts will cost the poorest £37bn a year by 2020: tax cuts will benefit the better off by £41bn.

Black and Asian women in the poorest third of households will lose over £2,000 a year on average from tax and benefit changes.

The living standards of lone mothers will fall by 18% on average (£8,790) from tax and benefit changes and lost services.

Black families in the poorest fifth of households will see their living standards fall by over £8,400 a year on average from cuts to benefits and services.

Asian families in the poorest fifth of households will see their living standards fall by over £11,600 on average.

Recommendations: A future that works for BME women

End the benefit freeze. Benefits and tax credits should be increased annually, linked to the cost of living and/or average wages.

Review Universal Credit and end the six week wait for payments. Partners should be entitled to split payments. Incentives for second earners and the work allowance need to be improved.

Remove arbitrary caps on benefits. Benefits must be based on household need.

Invest in social infrastructure (health, education and care services). These services are vital to both the economy and the wellbeing and life chances of individuals.

Carry out and publish equality impact assessments of all spending and revenue raising policies.

Assess the cumulative impact of the budget as a whole and monitor the actual equality impact of policies.

Account for the combined impact of different cuts on particularly vulnerable groups in assessments and monitoring.

Base local government funding on need. Ensure the funding system serves the needs of the local population.

The case for change

“I can see my parents, sometimes, I can see my parents really stressed out about money…. it wasn’t like this five years ago. Everything was calm back then. Then all of a sudden, everyone’s stressed about everything.[…]And even at school, I felt uncertain about what was going to happen in the future.” Interview, Manchester

Women have been disproportionately affected by these cuts as a result of structural inequalities which means they earn less, own less and have more responsibility for unpaid care and domestic work.[2] BME households also face persistent structural inequalities in education, employment, health and housing meaning that they have also been disproportionately affected by these cuts.[3]

For BME women, gender inequalities intersect with and compound racial inequalities making these women particularly vulnerable to cuts to benefits, tax credits and public services. This report shows the extent to which the BME women, and the poorest BME women in particular, are disproportionately affected by the spending cuts since 2010.

Situation of BME women in the UK

“Well at one point I had four jobs, when I was in college, just so I could pay for things.” (Interview, Manchester)

Men will disproportionately benefit from these tax cuts as they earn more, are more likely to be business owners and shareholders and more likely to drive and drive longer distances.

As a result of benefit cuts and tax changes:

“I just feel because of the cuts, because they are being so strict with benefits and working tax credits and things like that […] it is really difficult if you are a single parent” (Interview, Manchester)

Between 2010/11 and 2014/15, excluding spending on schools, the most deprived areas saw the largest cuts, averaging around £222 per head. The most affluent local authorities saw the lowest cut (around £40 per head).[14]

“There have been cuts in interpreters at hospitals. At one hospital the doctor asked a ten-year-old girl to interpret for her mother. It isn’t appropriate. If they have been a victim of abuse they will not disclose it if their child is interpreting.”  (Interview, service provider, Coventry)

Putting it all together

The very same groups that are hardest hit by the tax and benefit changes are also those that  are the most affected by cuts to public services. 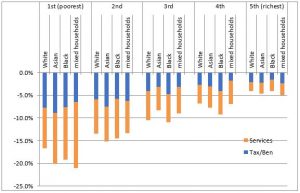 Theresa May became Prime Minister promising ‘a country that works for everyone’. She committed to fight the ‘burning injustice of inequality’, to support those who are ‘just managing’ but find life hard and to prioritise ‘ordinary working class families’ over the wealthy few.

This is not happening. Our research clearly shows that the injustice of inequality is being exacerbated by cuts to benefits and services that have hit the poorest hardest. Women are losing more than men and BME households are losing more than White households. The intersection of poverty, race and gender means that these cuts will lead to a dramatic fall in the standard of living of many BME women.

Coventry Women’s Voices works to ensure women’s voices are heard in Coventry when policy is made www.coventrywomensvoices.wordpress.com

RECLAIM is a youth leadership and social change organisation www.RECLAIM.org.uk

We would like to thank the Barrow Cadbury Trust for funding the researching and writing of this report, and for their support with our on going intersectional analysis of UK budgets. www.barrowcadbury.org.uk

[3] Reed H and Portes J, (2014), Cumulative Impact Assessment: A Research Report by Landman Economics and the National Institute of Economic and Social Research (NIESR) for the Equality and Human Rights Commission, EHRC. Available on line at: https://www.equalityhumanrights.com/sites/default/files/research-report-94-cumulative-impact-assessment.pdf

[4] Poverty is measured as the proportion of people living in households with an after housing costs income below 60% of the contemporary median household income.

Ashe, S; Nazroo, J (2016) Equality, Diversity and Racism in the Workplace: A Qualitative Analysis of the 2015 Race at Work Survey. Available at: https://race.bitc.org.uk/system/files/research/race_at_work_equality_diversity_and_racism_in_the_workplace_executive_summary_november_2016.pdf

[14] Joseph Rowntree Foundation, The cost of the cuts: the impact on local government and poorer communities, 2015, https://www.jrf.org.uk/report/cost-cuts-impact-local-government-and-poorer-communities

[15] Institute for Fiscal Studies (2017) Long-run comparisons of spending per pupil across different stages of education. Available at: https://www.ifs.org.uk/uploads/publications/comms/R126.pdf

[19] Women’s Aid England and Wales, Save Refuges, Save Lives, 2016 https://www.womensaid.org.uk/what-we-do/campaigning-and-influencing/campaign-with-us/sos/

[20] ‘Household living standards’ are defined in this model as the value of household disposable income plus the use-value of public services as measured by the cost of delivery of those public services.

[21] Unlike the analysis of tax and benefits in the previous chapter which is carried out at the individual and household level, the analysis of public service spending is done solely at household level.. As such, graphs here are only disaggregated further by gender insofar as there are gendered household types (e.g. lone female parents, single male pensioner etc.)

If economies are to be ‘rebalanced’ away from speculative activity and towards productive investment, policymakers must challenge the close political alliance between global finance and the major accountancy firms Manolis Kalaitzake is Postdoctoral Researcher, Max […]

With all the commotion about Catalan independence, when it is a question of more profits, the Catalan and Spanish elites could not be more unified. Toni Strubell  is a former MP in the Catalan Parliament, […]