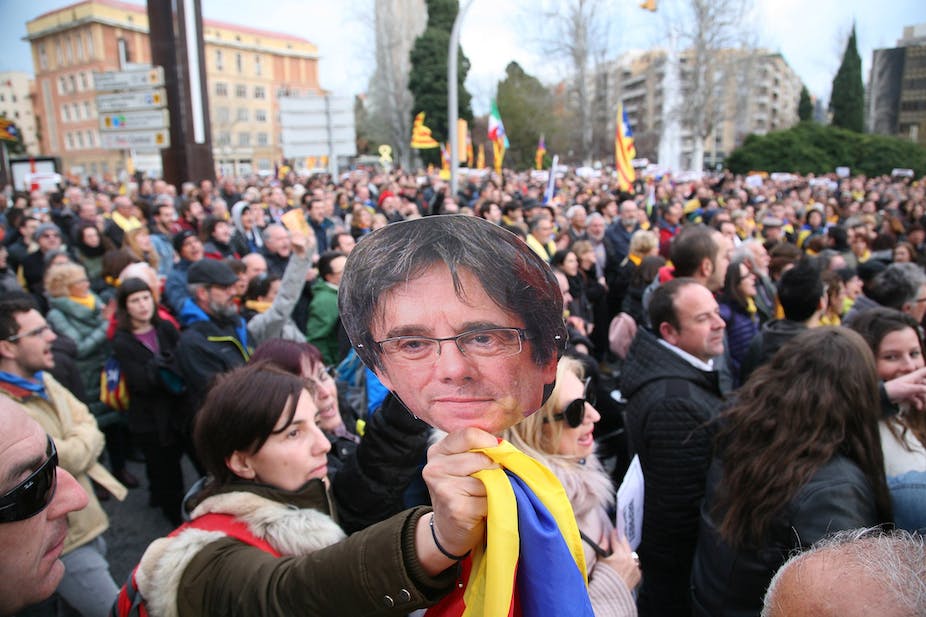 The detention of five leading Catalan pro-independence politicians, followed 48 hours later by the arrest and detention of deposed Catalan President Carles Puigdemont in Germany, brings the extraordinary and tumultuous events of Spain and Catalonia since September 2017 closer to an end point.

Puigdemont had been living in self-imposed exile in Belgium, and was arrested in Germany on his return from a trip to Finland after a European Arrest Warrant was reissued for him. German authorities have 60 days to respond to Madrid’s request to extradite him back to Spain, where he and his colleagues are charged with rebellion and misuse of public funds.

The attempted unilateral secession of Catalonia from Spain dramatically failed, as Puigdemont was the last remaining figure of significance who still stood by the notion of an independent Catalan Republic declared on October 27, 2017.

The Catalan process for secession, or independence, began in a political sense in 2012, though its root causes are much deeper. The turn in support for independence, reaching polling support as high as 55% in 2013, occurred at the height of Spain’s greatest economic crisis since the death of Francisco Franco in 1975.


Opinion polls aside, there has never been a majority support for independence in any regional election held since 2012, leading to a questionable legitimacy. This was compounded by Catalonia’s decision to try to break from Spain unilaterally from September 2017, based on the support of the 48% of voters for Catalan separatist parties obtained in the election of September 2015.

The Spanish authorities, the main political parties and the government have repeatedly declared that the separation of a part of Spain from the national territory is illegal. Here lie the origins of legal mechanisms being used again now against Puigdemont and his colleagues to confront the independence movement: the state declares independence is “illegal” hence it is simply a matter for the courts.

From 2012 and with more intensity from 2014, Catalan institutions embarked on an intense international lobbying campaign to obtain international support and achieve the aim of becoming a new member state of the European Union. But five months after the proclamation of the independent Catalan Republic in October 2017, not one country in the world has recognised Catalonia’s independence.

These three elements, ambivalent social and political support, a state explicitly hostile to any attempt at separation and a complete absence of international support, have led to the almost complete defeat for Catalan independence. The capture and imprisonment of Puigdemont symbolically closes this phase.

Between 2012 and 2017, the Catalan movement for independence displayed extraordinary capacity for mobilisation, managing to bring a million people onto the streets of Barcelona almost every year. The movement was peaceful, optimistic and celebratory, confident that separation from Spain was eminently achievable and imminent. However, this relentlessly upbeat outlook seemed to prevent recognition of hard political reality.

In spite of the repeated warnings from the Spanish political and legal authorities regarding the impossibility of secession, the movement’s leaders seemed oblivious to it. In spite of public statements from a range of international leaders, including the European Union, supporting the continued unity of Spain, the movement told itself that when the time came, recognition for Catalonia was inevitable.

While arguably it had little choice, the EU has backed Spain in the Catalan dispute. One consequence has been a eurosceptic turn within the Catalan independence movement over perceived betrayal by Brussels.

The Catalan movement for independence, as well as a number of internal and strategic errors, seriously misjudged the interest and willingness of the EU to countenance the break up of Spain. Yet, the EU is an alliance of states. Its 2009 Lisbon Treaty explicitly stated that member states must respect others’ territorial integrity.

The EU has been through repeated crises since 2008 and it seems astonishing that the leaders of Catalan independence thought the bloc might be supportive of further disruption. While accommodation might have been made for Scotland, this was because the British state was prepared to accept the separation of 5m Scots from a Britain of almost 65m should they vote for it in a referendum. Catalonia comprises a much higher proportion of the overall Spanish population (16%), while the Catalan economy is almost 20% of Spain’s overall GDP.

Read more:
Why independence movements in Scotland and elsewhere are tongue-tied over Catalonia


With Spain hostile, any separation of Catalonia could only be highly destabilising, with potential knock on effects in a Europe gradually recovering from the financial crisis.

Since the autumn of 2017, there has been a dramatic resurgence of Spanish nationalist sentiment in both Catalonia and Spain and a receding possibility of reforms of the 1978 Spanish constitution to adopt real federalism.

The Catalan independence movement is deeply divided between pragmatists and idealists and the optimism inherent in the movement since 2012 has been shattered. However, the grievances that produced the turn to secession in Catalonia have not even begun to be addressed and no meaningful resolution of the Catalan question will occur until the Madrid government recognises that it is a political problem.

Yanis Varoufakis – Why does economics matter?

Yanis Varoufakis is a Greek economist, politician, leader of MeRA25 and DiEM25, former Greece’s Finance Minister, author and professor 1. Why does economics matter? Everything we do, and everything that is possible within our social […]