Nearly ninety years after the Kinder Scout Mass Trespass, half of England’s land remains in the hands of just 1%. It’s time for radical land reform. 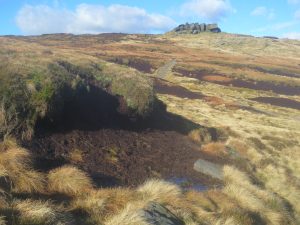 On 24 April 1982, 70-year-old Benny Rothman re-trod his steps of 50 years earlier to unveil a plaque at Bowden Bridge quarry in Derbyshire.

English land is still the natural habitat of a small and wealthy elite. But April 24th is a day when the rest of us, rural and urban dwellers alike, should banish these thoughts, down our tools – whatever form they may take – take off the caps we still so often doff, pull on a pair of boots and begin walking in Rothman’s footsteps.

Rothman, a young communist who was later to face down Mosley’s blackshirts on the streets of Manchester, was just 21 years of age in April 1932 when he led one of two groups of ramblers on an organised trespass to the plateau of Kinder Scout, the highest point in what is now the Peak District national park. Their muster point, prior to beginning the trespass, was Bowden Bridge.

The Duke of Devonshire, the owner of the land, sent a group of gamekeepers to repel the ramblers and scuffles ensued, though the protest was planned as peaceful and there were few injuries. But Rothman and his fellow Mancunian trespassers made it to their rendezvous with a group from Sheffield and one of the UK’s most successful direct action movements was born.

Five of the trespassers, including Rothman, were imprisoned for their actions even though trespass was not at the time a criminal offence. But in the months that followed, tens of thousands of walkers took part in similar protests and fired the starting gun on the designation of national parks and eventually the right to roam. In 1949 the National Parks and Access to the Countryside Act was passed, establishing the National Parks Commission, an agency that has now morphed into Natural England.

70 years on, our national parks are worth celebrating. But 87 years since the Kinder Scout trespass, not much has changed about English land, its ownership, our collective rights to enjoy its rich pleasures and to benefit from its preservation and restoration.

On the brilliant Who Owns England website – a joint project of forensic environmentalist Guy Shrubsole and data guru Anna Powell-Smith – there’s a map that reveals somewhere close to as much as it’s possible to know about English land ownership, built up from layers of freedom of information requests. Were he still alive, Rothman would probably be glued to Shrubsole and Powell-Smith’s work, exposing something he doubtless knew.

For while the Peak District was the first national park to be designated, and Kinder Scout is now part of the 12% of land in the park owned by the National Trust, it is still not clear or a matter of public record who owns much of the rest of the land in the park, or in any of the parks, or across the whole of England.

In a book to be published next month, Shrubsole estimates that almost half of English land is owned by less than 1% of the population; mostly by a combination of aristocrats and plutocrats.

In other countries – even those with a deep commitment to private ownership, such as the US – national parkland is taken into public ownership. But the unfinished work of the 1949 Act that established the parks concerns the question Shrubsole and Powell-Smith are now posing: who owns England?

The Cavendish family – the long line of Dukes of Devonshire who owned Kinder Scout when Rothman led his 400 comrades from Bowden Bridge towards the plateau – have since apologised for their decision to try and prevent the trespass. But recent work by Shrubsole and Powell-Smith reveals significant tracts of the land in the Peaks are still owned privately and managed as grouse moor, rather than in the public interest. This matters for three reasons.

The first is the management of an inherently scarce resource. As land in the UK faces multiple pressures, it should not be for private landowners, either by dint of inheritance or wealth or both, to determine how the majority of the landmass of the UK is used. This holds for both the countryside and urban areas and is not an argument about whether or not land is opened up for development, but about who gets to decide and who benefits.

The private ownership of land, such as many of England’s country estates, also confers significant power to the landowner. This means they can leverage their land to seek rents and acquire even more wealth, or keep its use exclusive as is the case with grouse moors. But it also means that they can exercise influence over anyone who uses it, such as tenants. This can often include whole communities, has remained broadly unchanged since feudalism and leads to an unhealthy culture of fear, patronage and clientelism.

The second is environmental. The current pattern of land ownership has coincided with a collapse in UK biodiversity. The most often-cited statistic that illustrates this is that the UK has lost 98% of its wildflower meadows since the middle of the 20th century. This marks a change in land use and management that has had little or no democratic scrutiny and been open to almost no public debate. Yet, it is catastrophic for us all.

Of course, private landowners may not be directly to blame for the ecological death of England’s countryside, but all of the incentives of private land ownership work against its management in the interests of nature, which of course in the long term strongly align with the public interests. Many will blame the EU subsidy regime for this decay, but the lion’s share of those subsidies have flowed to the richest of England’s landowners.

The reforms proposed by Michael Gove may go some way to addressing how subsidies work and who benefits. But quite probably the only way to reverse biodiversity loss in the UK is to change the way land is owned as well as how it is managed.

The third is less tangible but no less important. Land is nature’s bedrock. Nature has an intrinsic value that resists most attempts to capture it in an excel spreadsheet. Humans have an often unacknowledged and deep yearning to connect with nature and yet we can only do this if land is open to us.

This is especially important as we move into the era of planetary emergency and seek to find rapid solutions to climate change and biodiversity loss, which will require us to revisit our relationship with nature. But it is also important as machines and screens drag us ever further away from our place in the natural world.

The right-wing of politics and the gentry have English bucolicism as their environmental story; it may be a false and rotten tale of species extinction behind a veil of green pastures, but it is an evocative narrative – literal conservatism. Similarly in the early 2000s, as Lord Stern’s review of the economics of climate change and the global warming numbers game took hold, metropolitan centrists discovered a technocratic rap on the environment; all head and no heart.

But somewhere lost in the middle of the 20th century are the roots of an environmentalism for everyone borne out of a need for nature as the antidote to long hours spent working in largely unnatural and often unsafe surroundings; performing repetitive tasks in order to make someone else – who probably does own land – even richer. Environmentalism in this context is a resistance movement and a cry for release.

Ewan MacColl, who took part in the 1932 Kinder Scout Trespass with Bennie Rothman, wrote his first and possibly best known song – The Manchester Rambler – in the same year. ‘I may be a wageslave on Monday, but I am a free man on Sunday‘ is its main refrain.

As modern wageslaves, peering at the world through Microsoft filters or from the inside of a warehouse or shopping mall or as we commute to whichever box we work in, we need to rediscover Rothman and MacColl’s environmentalism.

We need to satisfy a yearning for freedom and an engagement with love, beauty and vulnerability at the hands of nature. We need dirt under our fingernails. To save the planet, we need to know what it is. The environment must be for everyone.

But far from being reversed, the privatisation of land is still underway. Just as urban and brownfield sites owned by civic institutions and public agencies are being sold to plug gaps in finances left by austerity, so too are England’s county farms now up for grabs and for the same reason.

Organisations such as the Land Justice Network, which is an umbrella for activists, academics and campaigning groups seeking to address inequality through land reform, have been banging the drum of change for years. In Scotland, the Land Commission, responding to public anger about ancient and unjust patterns of land ownership, is providing dialogue and process to bring about policy and, hopefully, legal changes. Next month’s publication of Shrubsole’s Who Owns England in book form seems very timely.

In England, we need to start where the Kinder Scout trespassers left off and support the nascent land reform movement. 70-years-on from the birth of our national parks and in the face of planetary emergency, there is no better or more important moment to begin.

John P. Ruehl: How many Ukrainian refugees will return home?

Ukraine is likely to have a permanent demographic crisis long after the war is over. John P. Ruehl is an Australian-American journalist living in Washington, D.C. This article was produced by Globetrotter. Russia’s February 2022 invasion […]

Uber seeks to claw back costs from accepting worker status for UK drivers by increasing its commission paid by its longest-serving drivers The Gig Economy Project, led by Ben Wray, was initiated by BRAVE NEW […]