The Netherlands’ Forum for Democracy (FvD) party, led by Thierry Baudet, has a radical-right populist slant but pitches it in the cultural language of the middle classes. The closer Baudet gets to this target group, the weaker the democratic coalition at the heart of Dutch politics. 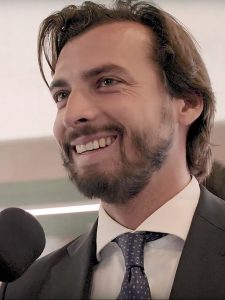 The Netherlands is no stranger to populist politics. The Low Countries experienced the same universal factors that tend to foster populism across the developed world – deindustrialisation, neoliberal consensus, social fragmentation, migration, and the backlash to the 1968 social revolutions. Its electoral system has no legal threshold for parliamentary representation, while the fragmented party system allows populists to both condemn the “cartel” of coalition parties and play a powerful role in opposition should there be a minority government.

The Netherlands has both left-populist and right-populist parties, and the right-populists have been well represented since the Centre Democrats of the 1990s and the meteoric career of Pim Fortuyn in the first years of this century. Since 2006, what Cas Mudde called the populist radical-right has been primarily represented by the Partij voor der Vrijheid (Party for Freedom, or PVV), led by Geert Wilders. Like most radical-right populist parties, the PVV is authoritarian, hostile to elites and fiercely xenophobic, especially towards Muslims. It often claims to be defending certain liberal values from Islamic tyranny, most notably freedom of speech, women’s rights, LGBT rights and secularism. Its electorate is strongly working class, and often poorer, older and with less formal education than other voters. The PVV’s fortunes have fluctuated over time; it won about 13.1 percent of the vote in the last general elections in 2017.

Since then, a new radical-right party, the Forum voor Democratie (Forum for Democracy, or FvD) has begun to eclipse the more-established PVV. In its debut at the 2017 general election, the FvD, led by Thierry Baudet, won two seats and 1.8 percent of the vote. Since then, buoyed – as Wilders and Fortuyn were – by intense media coverage, the party has drawn in many of the protest voters that once supported Geert Wilders. Last month, the Netherlands held provincial elections. The FvD came first in a fragmented field, winning 14.5 percent of the vote and coming in first in three provinces out of 12. This means that, when the provincial legislatures meet in May to elect the upper house of the national parliament, the FvD will have the largest faction there.

Is the rise of the FvD a cause for concern? Or even especially interesting? After all, almost a third of its voters last month were just former PVV voters in the 2017 general election, according to the Ipsos exit poll for the 2019 elections. The Ipsos exit polls found that 79 percent of FvD voters were casting a vote against the incumbent government, which one would expect from a populist party; 71 percent of PVV voters did the same. The FvD is primarily a party for men (64 percent of 2019 voters), but again, that’s normal for radical-right parties.

One reason for concern is the party’s flirtation with outright white nationalism. The PVV has at times called for the banning of the Qur’an, but it also frequently claims to be defending Dutch liberal values (from Muslims). Baudet seems to flirt with ideas that are openly fascist: Jacobin describes Baudet, who holds a PhD in law, as an aficionado of ideas of ethnic separateness associated with the Nouvelle Droite, and the work of Oswald Spengler, who spoke of the decline of the white race. A Dutch paper reported Baudet had an extended dinner meeting with American white supremacist Jared Taylor late last year. In his victory speech after the provincial elections, Baudet spoke of the “boreal” world; the term is seen as a euphemism for “Aryan” or “white.” Baudet also talks about “malevolent, aggressive elements… being smuggled into our social body.” A recent Foreign Policy article labelled the Forum “white nationalist.”

Another cause for worry is the way the FvD targets a particular electoral niche. Radical-right populist parties usually proclaim not just a hostility to the current elites, but to all elites, and an embrace of “common sense,” “the arrogance of ignorance,” and the “culturally low.” This gives them great purchase among voters with less formal education, among them working-class and lower-middle class (and sometimes older) voters.

Like most radical-right populists, Baudet condemns the political elite. Unlike most radical-right populists, Baudet does not condemn the concept of an elite, and indeed portrays himself as an educated, cultured man. The FvD has been described as “the most self-consciously elitist party in the Dutch political landscape.” In an interview with Weltwoche, Baudet lamented modernist trends in music and architecture: “We’ve left tonal music behind. We’ve left realist or mimetic painting behind. We’ve left traditional architecture behind. I’m deeply opposed to the fundamental philosophical principles of modern architecture.”

This may be the real danger that Baudet poses. He offers a fundamentally racist, authoritarian and nativist project in centre-right – or more precisely, middle-class – clothing. A key barrier most radical-right populist parties face is that their electorates are of relatively low social status. This hampers their appeal to middle-class and better-educated voters, partly because it pulls their economic and welfare policies leftwards, and partly because middle-class voters don’t necessarily want to back a “lower-class” party or candidate. When centre-right candidate François Fillon came third in the 2017 French presidential election, 48 percent of his former voters backed centrist Emmanuel Macron. Only 20 percent chose right-populist Marine Le Pen. Notably, Fillon’s voters were much more likely to be wealthier and have university education than Le Pen’s.

In practice, centre-right and radical-right populist parties often work together, since in a fragmented political environment, neither can win outright. Tim Bale noted this phenomenon as far back as 2003. And centre-right parties have been moving right on immigration and integration issues for longer still. But these parties retain somewhat different electoral bases and political projects, and in some countries such alliances are not acceptable (Germany, Sweden, France). And centre-right parties don’t openly embrace white nationalists or the works of interwar race theorists.

The FvD, on the other hand, unites the centre-right’s favoured cultural identity and economic policies with far-right racism, authoritarianism and xenophobia in a single party. And that unadulterated, anti-pluralist project is aimed squarely at the “modernisation winners,” the middle classes necessary for the maintenance of liberal democracy. Kees Van Kersbergen and André Krouwel describe these as “people enjoying a reasonable measure of protection, who are neither insecure nor anxious. They see the market as an opportunity for progress, they view the unification of Europe as a success, they live alongside rather than inside the multicultural society, they have a strong, individualised lifestyle and are not interested in the neighbourhood as a centre for solidarity and social control.”

The centre-right voters among these tranches of society may be increasingly dissatisfied with the elites who manage free markets, Europe and social affairs, but they are also reluctant to vote for a rabble-rouser like Wilders who pitches his message towards the working classes.

The FvD takes a radical-right populist and racist discourse, full of references to nationalist authors of the 20th century and pitches it in a cultural language and praxis aimed at these middle classes. Baudet is offering the authoritarian racism of Wilders to a mainstream audience which is disillusioned with democracy but not with insider status. He offers a defence of meritocracy and hard-right economic policies (such as abolishing inheritance and gift taxes). As Foreign Policy’s article put it, “Baudet has an appeal that can potentially unite a divided right-wing electorate that until now mostly split voters between the establishment conservatives of the VVD and obstructionist populist forces like the PVV.”

It is far too early to gauge the long-term prospects of the FvD. Nor is it immediately evident that it is replacing the centre-right; only about a quarter of its 2019 provincial elections vote came from voters that chose a centre-right party in the 2017 general elections, as opposed to 30 percent from Wilders’ party and 19 percent from 2017 FvD voters. But what is worrisome about Baudet and his outfit is that they target the voters still remaining within the liberal consensus, the one that upholds, for all its failings, the key pillars of European liberal democracy. These centre-right voters possess the resources and social capital not just to influence or besiege the political class, but to displace it; their allegiance is crucial to sustaining liberal democracy itself. The more success Baudet obtains in this target group, the weaker the democratic coalition at the heart of Dutch politics, and the longer the Hungarian and Italian shadows over Northern Europe.

Vickie Cooper and David Whyte: The Violence of Austerity

The authors examine the secret agenda behind austerity in Britain and the horrendous consequences it is having for much of the populace, especially for the vulnerable. Vickie Cooper is Lecturer in Social Policy and Criminology […]

This is the third cross-posting from out partner website The New Pretender, concerning today’s elections in Turkey. In this article, Omer Tekdemir analyses the strategies of the main forces involved in the campaign to conclude […]