On 9 October during protests in Rome against Italy’s vaccine mandates, demonstrators stormed and ransacked the headquarter of the CGIL labour union, an act not seen since the rise of  Mussolini’s fascists. 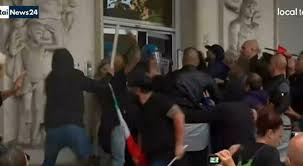 The assault on the CGIL headquarters in Rome was unthinkable. The General Confederation of Labour has experienced difficult times over the decades that separate us from the second postwar period. There has been no lack of hard and confrontational periods in the past decades.

Until the end of the 1960s, union members could not enter factories. And the great mass demonstrations could hide agents provocateurs. The relationship with many newspapers was often marked by dissent when not open hostility. But the CGIL has always enjoyed the prestige of a large mass organization, and a pillar of the democratic regime. Di Vittorio and Lama, to remember only two great leaders, were respectively counted among the fathers and defenders of democracy.

What happened on Saturday in this month of October was not conceivable even in the most acute phases of the political conflict in the country. The assault on the CGIL headquarters cannot be condemned only as an act of a fascist nature. There is no doubt that it was such.

The criminal act occurred at a stage in which the CGIL at the forefront, together with the other confederations, plays an essential political and social role in defense of the workers, while decisive factories threaten to close, and the country is still experiencing the aftermath of the most serious crisis that occurred after the Second World War, with millions of unemployed and precarious workers, due to the effects of the coronavirus pandemic.

The assault on the CGIL did not only deal with the trade union world, but was the attack on a pillar of democracy. Millions of women, men and young people, despite the difficulties that the union itself inevitably encounters, recognize themselves in its representation. The attack on a headquarters that has never had to defend itself even in the darkest moments of national history was a gesture that reveals the criminal attitudes of the neo-fascist far right.

The political condition of the country can be judged in different ways, but one cannot escape the sensation of a difficulty in current politics in which the parties that have made the history of republican democracy are linked with parties that are more or less divided rightwing parties, in many ways with reactionary positions.

In any case, the leadership of the government remains confused and inadequate. Confindustria – the association representing ,companies – focuses on the reopening of layoffs after the pandemic, in a framework of increasing unemployment and growing destabilization of work conditions. When the most acute phase of the recession will end between 2022 and 2023,, national income will still be below the level of 2008 before the Great Recession. And the southern regions have an unemployment rate that is the highest in the eurozone.

The CGIL ,along with the other main unions, is trying to stop the degradation. On the one hand, worker representation is its historical task; on the other hand, it is a way to make sense of its democratic representation and the defense of democracy in a difficult phase, when less than 50 percent of voters vote in large cities. The union cannot take the place of parties. But it is a fact that in the past it has been a solid bulwark of democracy.

The Prime Minister, Mario Draghi, visited the CGIL to show his closeness and the embrace with Maurizio Landini , the general secretary of CGIL on the threshold of the Confederation is a sign of civility for the country. The response to the criminal act against the CGIL could mark the start of a turning point. It is neither easy nor certain. But it is a possibility not to be lost in the rhetoric determined by the gravity of a circumstance that hits a democratic country.

Again another major strike being ignored in the corporate media. Like the UK University Strike, this too will have major repercussions in France. Heather Connolly is Associate Professor of Employment Relations, School of Business, University […]

By Oliver Davis, University of Warwick Historians of the May 1968 protests may have rebuffed Emmanuel Macron’s outlandish proposal for an official state commemoration of the imminent 50th anniversary, but it seems the president is […]