The EU is moving towards a regulation of the Gig Economy. Lobbyists in Brussels are spending fast and heavy. What is on the table up to now? 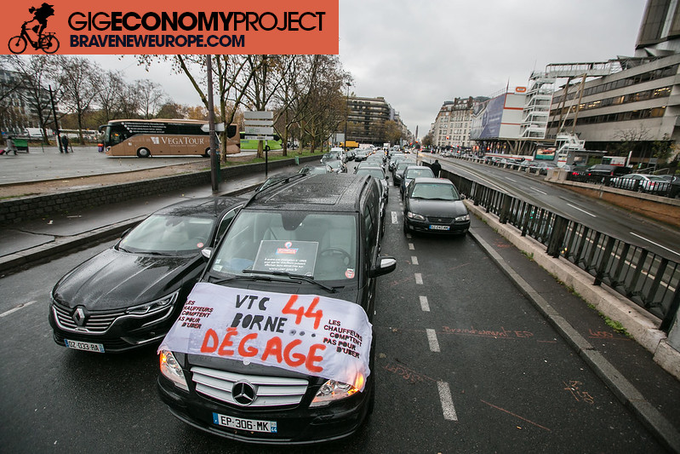 What should the legal status of workers on digital labour platforms in Europe be? And what’s the best route to securing platform workers’ rights?

This was the topic of a ‘webinar’ hosted by Leïla Chaibi, MEP for France Insoumise, on Tuesday [28 January]. Chaibi has recently published a proposal for an EU directive on platform workers on behalf of The Left group in the European Parliament.

The European Commission is set to come forward with a directive on platform work, the process for which is expected to start on 23 February and will be published by the end of the year, and when implemented will be binding on EU nation-states.

The announcement of a directive comes after a series of court rulings across the continent, including Spain, Italy and France, which have found that gig workers are ‘bogus’ self-employed and should be considered wage-earners. This has forced the hand of nation-states to pursue legislation on the issue, including in France, where a recent report commissioned by President Emmanuel Macron on regulating platform work was debated at the webinar.

Jean-Yves Frouin, the former chair of the court of cassation, was tasked by Macron to investigate the issue, and submitted his report in December. The report found that new regulation was necessary as gigification was contributing to “a new class of precarious workers”. It rejected the third employee status between self-employed and employed which is currently in operation in Spain, Italy and the UK, finding this was “replacing a blurred border by two borders that would be equally blurred”.

Instead, Frouin called for the creation of “third party security”, or what has been called ‘wage portage’, whereby a holding company or a co-operative would employ workers who had been working for a digital platform regularly for six to 12 months. This umbrella firm would then theoretically give workers all the protections of salaried employment while they would continue to work for the digital platform on the same basis.

A Court of Cassation ruling on 4 March last year had found that Uber drivers were bogus self-employed and that they were really employees of the digital platform. Frouin concurred that this was a “bogus” status, and the report stated that employee status would “have the effect of extending employee rights and protections to platform workers” and “finally lead to clarification” legally speaking, but that “it is not, however, the working hypothesis of the public authorities that initiated this mission”.

Frouin told the webinar that he had found that “a vast majority of drivers were against a salaried status” because they were “deeply attached to their autonomy”.

Responding, Arthur Hay, a former delivery rider and a trade unionist in the CGT, said the current status of ‘micro-entrepreneur’ in France made it easier for digital platforms to sack workers, which was his own fate when he began union organising as a rider.

Hay, who has been part of creating a co-operative as a “counter-model” to “oppose the blackmailing of the platforms” and offer a “social and ecological alternative”, said he was not surprised by the proposals in the Frouin report, saying the “objective of the government was to find a solution which will protect the platforms”. Hay added that umbrella companies would “create a barrier between the employer’s responsibility and the worker”, leading to platforms continuing to “impose the rate and run the market as they wish”.

Barbara Gomes, a PhD in private law and a specialist on Uberisation, said that the Frouin report “rules out the possible application of wage status to workers on digital platforms, yet recognition of wage status would have resulted in settling legal disputes”. She found that the report had “sought to protect the economic model of platforms” by offering “some rights to workers, but not given a status of wage-earner”, a solution which she said would only increase complexity and absolved platforms of responsibility to their workers.

Speaking from Portugal, Maria da Paz Campos Lima, a PhD in sociology and expert on platform work, said that the current Portuguese system was the closest in Europe to the ‘wage portage’ proposal in Frouin’s report. Lima said that while there had been progress made in Portugal, there had been problems with the umbrella company model, not least that they have the wage responsibility but have “no say” over the enterprise. They are powerless when a worker is terminated from the platform, and have no control over working time, she added.

Lima said there had been protests from umbrella companies and workers in Portugal after Uber introduced a new initiative to reduce prices. The Left Bloc, one of the main opposition parties in Portugal, has campaigned to end the umbrella company model and instead to have a direct relationship between platforms and workers.

Danièle Obono, France Insoumise MP in the French National Assembly, who has recently co-authored a parliamentary report on the condition of platform workers in France, said that until now it had been unclear whether national law or EU law was going to take the lead, but that the planned EU Commission directive had been clarifying in that respect. Their strategy now was to “use the most protective national framework to improve the EU legislation, not water it down,” she explained.

The webinar also heard from Francisco Trillo Párraga, professor of Labour law in Spain, who said that proposals to regulate digital platforms in Spain through the proposed ‘Stop Fake Autonomous Law’ had “become less ambitious” due to pressure from within government and from platform companies on labour minister Yolanda Díaz. The Gig Economy Project reported on the Spanish situation earlier this month.

While corporate media is portraying Biden’s election as a new beginning, it is actually a throwback to before Trump. US liberal democratic politics, as in Europe, is not going anywhere. Jonathan Cook is an award-winning […]