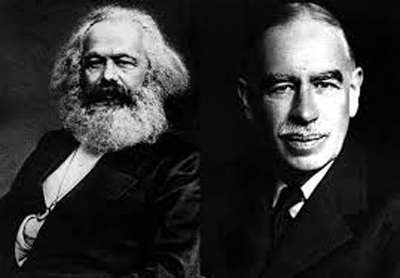 This short piece is stimulated by my recent reading of the French translation of Joan Robinson’s 1942 Essay on Marxian Economics published together with several additional texts on Marx, Marshall and Keynes written by Robinson over the years. (The translation and preface by Ulysse Lojkine.) It was also stimulated by a very nice review of Joan Robinson’s life and The Essay just published by Carolina Alves in “The Journal of Economic Perspectives”.

Before I begin, let me set the knowledge limits right. My knowledge of Marx had always been good, and since only a couple of months ago I finished writing a long chapter on Marx’s views on income distribution (for my forthcoming book) that deals with the usual topics of the real wage, rising organic composition of capital, tendency of the profit rate to fall etc., all of that is fresh in my mind.

Keynes is much less so—although I have to say that I had many years ago an extraordinary person as my tutor in Keynes’s General Theory. I had a year of tutoring (one-on-one) from Abba Lerner who, of course, was one of the earliest disciples of Keynes. Lerner’s approach was to make me read a chapter from the GT, then to summarize it and discuss it and send it to Abba, who next week would bring my text all corrected in red. I admired Keynes for his brilliance. I still remember vividly (and I am writing this very far from any book by Keynes) his chapter on the “own rate of interest” and the “carriage cost of money” that Lerner made me read and reread. But I have not at all followed Keynesian macroeconomic developments, and I am generally quite uninterested in macroeconomics. So here I will speak of what I think of Keynes, not of Keynesians.

The objective of Joan Robinson’s Essay was to enact a “rapprochement” between the Marx’s and Keynes’ economics, by showing similarities between Marx’s view of capitalist relations of production resulting in a lack of effective demand and the themes from The General Theory. Here is one of the supporting quotes from Marx: “The ultimate reason for all real crises always remains the poverty and restricted consumption of the masses, in the face of the drive of capitalist production to develop the productive forces as if only the absolute consumption capacity of society set a limit to them.” (Capital, vol. 3, Ch. XXX). One can produce more, and Joan Robinson does. Or as Marx writes—I paraphrase—for every individual capitalist, his own workers are his antagonists: he wants to pay them less; but workers of other capitalists are his “friends”, they are his customers. When all capitalists try to squeeze workers, and when they all succeed, the outcome is the economic crisis.

The other explanation of economic crises in Marx is the unbalanced growth of departments that produce consumption goods and those that produce investment goods but this explanation holds less interest for Keynesians. Robinson also provides a very nice summary of other Marx’s ideas, including the labor theory of value, the transformation problem, the tendency of the profit rate to fall etc., but the emphasis is, as I mentioned, on the origin of crises and the effective demand.

When she contrasts Marx, Marshall, and Keynes, Robinson argues that we should try to separate in the study of each the “scientific” prepositions about the functioning of the economy from the “ideological” drivers present in all three authors: in Marx, the conviction that capitalism is a historical (and thus transitory) mode of production, in Marshall, the assumption of capitalism as the “natural” way to organize production, and in Keynes, a desire to improve capitalism or to save it from self-destruction.

To me, it seems that the difference at least between Marx and Keynes is not so much ideological (although I would not deny that it is real) but in the time-horizon they use in their analyses. (I think that Schumpeter had something similar in mind, so this may not be a very original view.)

For Marx, the time horizon is always long-term, even when he discusses crises. Crises are temporary manifestations of the long-term (inherent) issues faced by capitalist production, and it is thus not surprising that Marxist authors like Grossman, Bukharin and Mandel would –I think closely following Marx—see the overlap between the long-run declining rate of profit and the short-term instability as bringing capitalism to an end. (It is also not surprising that Robinson rejects the tendency of the rate of profit to fall, but supports the explanation of the crises.) Everything in Marx, as Joan Robinson rightly says, is historical. The reader is always directed to look forward, to think about the fundamental forces that drive capitalism.

In Keynes, the situation is different, almost the reverse. The entire Keynes’s edifice (not necessarily Keynesian) is short-term: the objective is to stabilize the economy and to return it to the condition of full- or near-full employment. Keynes is not particularly concerned with capitalism’s long-term. Implicitly, I think, he believed that capitalism can go on forever so long as it is “fixed” in such a way as to produce full employment of resources. “Fixing” it might involve government-directed investment, or the euthanasia of the rentier, but Keynes is not a purist: he would take any, including seemingly socialist, tool to mend things.

Let me illustrate the difference between the Marx’s long-run and Keynes’ short-run on two concepts where our authors seem to speak of the same thing: “the animal spirits” and “the reserve army of labor.” “The animal spirits” was, as is well-known, the idea that Keynes introduced to explain capitalists’ investment decisions; capitalists are most the time not led by the exact calculus of expected gain and loss but act on their gut feeling (“animal spirit”), and if, for whatever reason, that gut feeling changes, the economy can experience sudden expansions or contractions of demand. Joan Robinson mentions how this largely irrational (in the strict sense) incentive to invest is similar to Marx’s point of view where capitalists qua capitalists always strive not only to achieve maximum profit but also to reinvest it. For Marx, they become capitalists only when they do not consume profit but reinvest it. Accumulation is (to use another famous quote) “Moses and all the prophets.” In both cases we see that the incentive to invest is given from the outside the economics proper: through sudden bursts of optimism or pessimist, or by the definition of what we may call “the capitalist spirit.” But in Keynes’ case, the concept is used to explain short-term fluctuations; in Marx, it is the definitional feature of the whole class, and thus obviously long-term.

Or take the “reserve army of labor” which shrinks and expands as the economic activity waxes and wanes. It is very similar to the cyclical unemployment that plays such a big role in Keynes (actually, one could say, motivates the entire book). But Marx’s “reserve army” is an ever-present, hence long-term, feature of capitalism. Capitalists need it in order to discipline labor, and if, in some periods, the reserve army shrinks, thus reducing the relative power of the capitalist class, it immediately sets in motion forces that will bring it back to life: labor-saving investments. The reserve army can never disappear in Marx. In Keynes, however, cyclical unemployment is ideally to be reduced to zero. It is something that capitalism, being judiciously managed, can eliminate. Again, the horizons are different: for Marx, it is the long-term structural feature, for Keynes, it is the short-term interplay between key economic variables.

Marx was the first student of fundamental historical features of capitalism, Keynes, the last cameralist. Marx was a historian who believed that economics shapes history, Keynes, the smartest adviser to power. In Capital, we have a Bible of capitalism, in General Theory, we have The Prince for economic management of capitalism.

One of the great economic fallacies: that a government needs to manage its finances like a household, and if the government consistently spends more than it receives in income, the nation’s debt will ultimately become […]

Be  it governments of the far-right or faux left Social Democrats and Podemos, civil rights are apparently irrelevant in Spain writes Chris Bambery Chris Bambery is author and broadcaster. Co-author (with George Kerevan) of Catalonia […]

Shutterstock Alexander Tziamalis, Sheffield Hallam University One of the first things economics students learn about is Gross Domestic Product (GDP). GDP is also a central concept in many political debates, including Brexit. Will it rise? […]