There are endless discussions about what would have happened had the USSR continued its New Economic Policy (NEP), especially in the agricultural sector. Some thoughts by Branko Milanović. 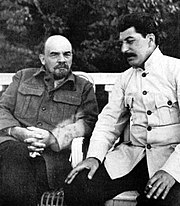 In the first chapter of Volume 3 of Main Currents of Marxism Leszek Kolakowski discusses practical and theoretical disagreements regarding the development of the USSR after the October Revolution and the Civil War. Although Kolakowski’s main focus is, as implied by the title of his work, on ideology, economics –at least in that period—played an important role. Kolakowski goes over the well-trodden ground of War Communism (1918-21), NEP (1921-28), and collectivization and planning (1928–…). There is not much new in his discussion of the conflict between Preobrazhensky and Trotsky on the one side (arguing for collectivization of land and fast industrialization) and, on the other side, Stalin (for a while) and Bukharin and Rykov, favoring continuation of NEP. What is original is, in my opinion, Kolakowski’s excessive determinism: he thinks that the differences between the two camps, however seemingly great, eventually had to converge to the same point (totalitarian party control) and that fact made collectivization and integral planning the only realistic option: “even the famous debate on industrialization…does not deserve to be presented as a clash between two opposite principles” (Kolakowski, p. 25).

Kolakowski’s somewhat overly deterministic view that the battle was bound to end with the victory of the “collectivizers” is based on the assumption that NEP can never be seriously pursued by a communist party as it would thereby cede some of its economic, and possibly political, power to peasants. NEP was, according to Kolakowski, against both Marxist and Bolshevik principles because it meant the restoration of capitalism in the countryside, replacement of a proletarian government by the one supportive of peasantry, which was in the purest Marxist tradition always regarded (especially when possessing some land) with a fair dose of skepticism if not sheer hostility. “How the ‘proletariat’, i.e. the Bolshevik party, could maintain its dominant position if the state economy was at the mercy of the peasants; as the market developed, their position would become stronger, and they might in the end threaten the ‘proletarian dictatorship’” (Kolakowski, p.30).

There were, Kolakowski acknowledges, some –few– political elements favoring NEP: Lenin’s view of the need for a “worker-peasant government” and his insistence on keeping firmly in the camp of the revolution poor and middle-income peasants. The argument of the pro-NEP fraction was that industrialization could be achieved, not as Preobrazhensky and Trotsky believed, by “internal colonization” of peasants, but by expanding food production, releasing, thanks to higher agricultural productivity, rural labor, and then by the use that labor in industry (while having the wherewithal to pay for it thanks to cheaper and more abundant food). The NEP model is Ricardian in its simplicity: reduction in the cost of food reduces the labor share in the industrial sector (in Ricardo, it was the labor share in capitalist production), increases the surplus, and that surplus can be used by the state to invest and accelerate development (in Ricardo, the surplus is used by capitalists to do the same thing).

NEP need not necessarily produce lower growth rates and slower industrialization (at least over the medium-term) than collectivization and forced requisition of grain from peasants. The latter, as indeed happened, may rather reduce food production (this is why millions perished of famine) and thus make maintenance of large number of industrial workers more difficult than under the NEP.

As I mentioned, this type of argument is basically dismissed by Kolakowski because of his view that ideologically and in terms of political power, Stalinist industrialization was the only course of action compatible with what Bolsheviks stood for. Kolakowski’s view though is less compelling now than it was in 1975-76 when he wrote Main currents…. The reasons is that we lacked then an example of a NEP in practice: the Soviet NEP was short-lived and one could only speculate what might have happened had it been prosecuted for several decades. (It is true that Kolakowski could have also used the example of his native Poland to observe that privately-owned agriculture did not spell the doom of communism—but perhaps he thought that the maintenance of Polish communism depended on foreign forces, namely the Soviet Union, and that this example therefore could not be carried over to the USSR.)

But with China’s “household responsibility system”, we have a strong empirical counterfactual. China’s “responsibility system” involved breaking up communal land ownership and transferring it to individual families in an egalitarian fashion. This was also the starting point of NEP: the land ownership in the Soviet Union after spontaneous peasant occupations, flight of landlords, and formal nationalization in 1918 was widespread. While the land was not as equally distributed as in China in 1978-80, the percentage of large land-owners was small. Even according to Stalin, middle and poor peasants produced ¾ of marketable grain surplus. It is true that the share of their production that was for sale was less than among state farms, and among the kulaks (which was one of Stalin’s justifications for the collectivization), but surely that share was not cast in stone and would have increased with better incentives and modernized agriculture. * And this indeed happened in China.

Agricultural production in China increased, on average, by 6% in the first decade after the responsibility system was introduced. Between 1981 and 1996, mean rural per capita income increased from 683 (inflation-adjusted) yuans to 2101, that is, it grew by an average annual rate of almost 8 percent. The increases, as the graph below shows, continued afterwards. Chinese rural growth released between 50 and 100 million workers who found jobs in TVEs (Township and Village Enterprises) that mushroomed in the 1980 and 1990s, and led to the increase in industrial production. Finally, the increased output and savings enabled, as is now too well known, a spectacular increase in Chinese industrial production. 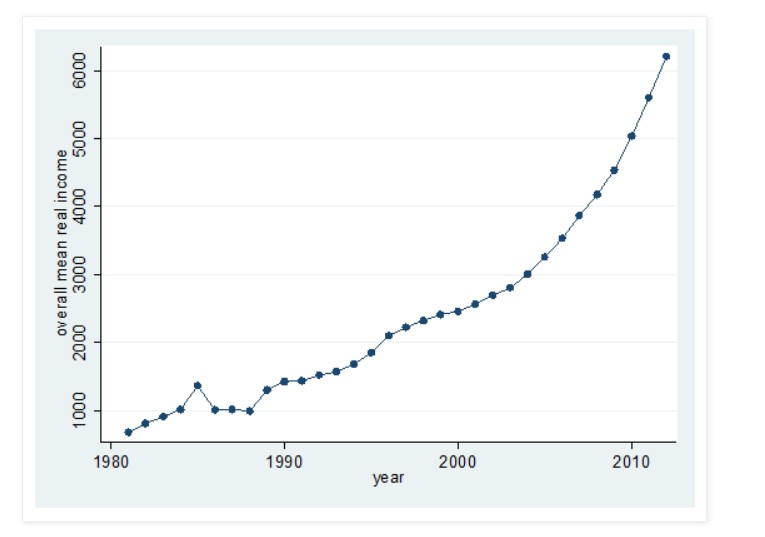 All of these positive effects continued in China for more than four decades. But if we limit our attention to just the first fifteen years (given that, this was –as we know now—the period which USSR had to create an industrial base before being attacked by the Nazis), Chinese results are no less spectacular. There is no reason to think they would not have been replicated in the USSR, where indeed the short NEP period revived agriculture, commerce and light industry. According to Maddison’s most recent data, real Soviet GDP per capita increased from $838 in 1921 to $2184 in 1928. While it would be wrong to ascribe all that growth to NEP (since a lot of it had simply to do with the end of the Civil War and reintroduction of some peacetime normalcy) there is little doubt that the effects of NEP were significant.

The Chinese experience shows not only that the economic effects of agricultural liberalization combined with a more restricted role of the state elsewhere would have been positive: after all, this was clear even from the limited experience of NEP in the USSR. They question one of the key assumptions made by Kolakowski, namely that NEP was incompatible with the continued one-party rule by the Communist party. The conclusions made by Kolakowski in 1976 regarding the fundamental incompatibility between NEP and one-party rule, and consequently, regarding an almost preordained abandonment of NEP in favor of a fully planned system and socialized agriculture, need to be revised.

Note: * Stalin believed in a form of technological determinism: increasing returns to scale in agriculture principally because of ability to apply better technology.

The ‘green’ vote is becoming a determining factor in the US election campaign. Bernie Sanders’ proposal has a very special profile. Besides the EU political elite and corporate lobbyists, there is little to stop this […]

While carbon taxes were once at the centre of discussions about tackling climate crisis, aggressive lobbying by fossil fuel advocates persuaded the public that they are regressive and would hit the world’s poorest hardest. Jacqueline […]