Friends of the Earth Europe Communications 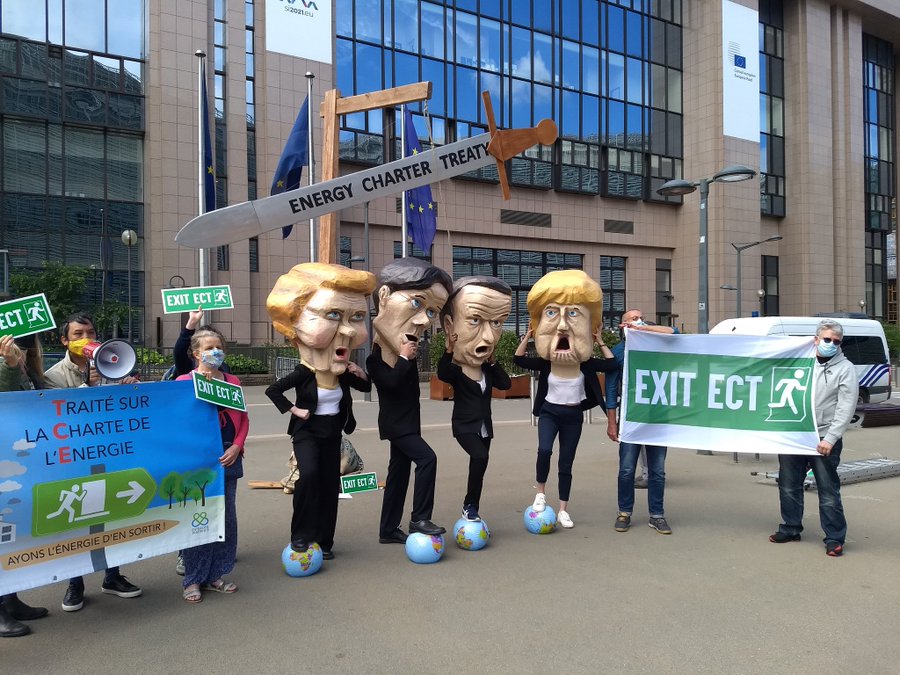 In the face of rising controversy around the Energy Charter Treaty (ECT), which critics accuse of being a major obstacle to fast and effective action on the climate and environmental crises, the EU has set the goal of trying to ‘modernise’ it. The sixth round of reform negotiations takes place from 6 to 9 July 2021 online. This process has achieved no outcomes so far and major divergences between contracting parties remain, making it very unlikely the EU can achieve its modernisation objectives.
The stunt organised on the 6th July in front of the EU Council building by Friends of the Earth Europe, Climate Action Network Europe, Rise for Climate Belgium, 11.11.11and CNCD highlights how the treaty is a sword of Damocles threatening climate action and leaders’ ability to make climate policies.
Simultaneously a large cross section of over 400worldwide civil society organisations are calling in a statement for an end to fossil fuel protection, and for ECT signatories countries to end the reform process and exit the ECT by the COP26 (November 2021) in Glasgow.
What is the Energy Charter Treaty?
●The Energy Charter Treaty (ECT) is a plurilateral investment agreement, which as of 2020 is ratified by 53 countries and the EU. It was agreed in the 1990s and protects foreign investments in the energy sector.
●Under the ECT regime, foreign investors can sue states for almost any decisions that impact the investor’s expected profits –including for climate protection.
●These investor–state dispute settlement(ISDS) claims are dealt through private arbitration tribunals, composed of party–appointed lawyers, circumventing national courts.
●The ECT already generated 135 investor–state arbitration claims, making it the world’s most potent investment protection agreement.
Why does this matter?
●The clock is ticking on climate change, but ECT parties, including the EU, are wasting time with negotiations to ‘modernise’ the ECT –even though there are very clear signs the talks are failing and the treaty cannot be reformed in line with the transition to a 100% renewable future.
●The ECT has already been used a number of times against states attempting to limit the production or use of fossil fuels (see overview below). It is expected that a lot more cases will arise in future as states take more ambitious steps to phase–out fossil fuels.
●Fossil fuel infrastructure protected by the ECT regime is estimated to have a value of€345 billion.
●46 coal–fired power plants are currently protected by the ECT.
What is being said about it?
French ministers have expressed their frustration at the lack of progress: In a letter to the European Commission in December 2020, they predict that modernisation will “probably not be completed for several years”. Also, they state, the EU’s goals are “far from being achieved”. France, therefore, suggested the desire to “publicly discuss” a “coordinated withdrawal” from the Energy Charter.
Barbara Pompili, France’s Minister for Ecological Transition,told the National Assembly on 22 June 2021: the treaty is “obsolete –it protects, among other things, investments in fossil fuels and is therefore no longer at all adapted to the energy and climate challenges of our time, following the Paris Agreement.” She reported that reform negotiations “are clearly not delivering” and “will not produce real progress for many years at best”.
The Spanish government also made a similar threat in a letter to the European executive, stating should it not be possible to bring the Energy Charter Treaty in line with European climate goals, withdrawal would be the “only effective long–term solution”.
Claude Turmes, Luxembourg Energy Minister expressed his disappointment at the lack of progress during the 4th round of modernisation.
Pascal Canfin, RENEW MEP and chair of the ENVI in the European Parliament and Anna Cavazzini, Green MEP and chair of the European Parliament Committee on the Internal Market said: “We call on EU negotiators to present different exit scenario pathways from this treaty. The modernisation attempt might just delay the inevitable: that the EU as a whole should exit in order to be coherent with its climate goals.”
Bernd Lange, S&D MEP and chair of the Committee on International Trade said: “It is high time that Germany once again sides with progressive countries like Spain or France. These countries are demanding an honest assessment of the possibilities for reform and a withdrawal if reform is not possible. We should look for a joint agreement with all countries that want to exit to no longer allow lawsuits among themselves.”

The ECT is the agreement that has triggered the largest number of lawsuits by foreign investors against signatory states in the world. Recent cases include:

●Uniper v. Netherlands – Uniper asked for 1 billion euros in compensation for the Dutch coal phase out by 2030.

●Vermilion v. France – In 2017 Canadian oil and gas company Vermilion threatened to sue France under the ECT over a proposed law to end fossil fuel extraction on French territory, including overseas, by 2040. The threat of a lawsuit potentially contributed to watering down the law, the final version of which allows exploitation permits to be renewed after that deadline.

●Rockhopper v. Italy – Since 2017, the UK company Rockhopper has been suing Italy over a ban on new oil and gas operations near the country’s coast, claiming $275 million in compensation.

Why is the modernisation process a failure?

●The agenda for the modernisation talks does not live up to the promise of making the ECT climate–friendly –several issues are not even discussed. In particular, the reform will not make changes to the controversial ISDS mechanism, the sunset clause (which allows investors to file arbitration claims for 20 years after a state withdraws from the treaty), or the way the high compensations are calculated.

●The 53 ECT members include countries with dramatically different climate ambition, yet any changes to the ECT require unanimity. States such as Japan (the main contributor to the ECT) have already indicated that they do not support any major changes on the whole range of modernisation issues.

●Little progresshas been made so far.

The ECT’s investment protection provisions have not been updated since the 1990s and are now, according to the European Commission (EC) “outdated” compared to the new standards of the EU’s reformed approach on investment policy.

Already in 2009, contracting parties to the ECT agreed to modernise the treaty. In 2018, a list of 25 negotiation topics was adopted as well as a decision to commence negotiations in December 2019. The EU adopted a negotiation mandate for ECT reform in July 2019.

●6 July: Over 400 civil society organisations are joining the movement and published a statement to call EU leaders to pull out of the ECT by the end of 2021 at the COP26.

●In February 2021, an online petitiongathered over 1 million signatures asking the EU to pull out from the ECT.

●On 3 November 2020, 260 MEPs/MPsfrom 20 EU member states called on EU countries to withdraw from the ECT if protection of foreign investment in fossil fuels is not removed from the Treaty

.●More than 400 climate leaders signed anopen lettercalling on EU governments to withdraw from the ECT.

●Youth, the European Renewable Energy Federation, and investorshave also raised their voices against the ECT.

History shows robust antitrust enforcement helps promote a prosperous, fair, and balanced economy. Antitrust expert Mark Glick explains how the U.S. went astray during the 1980s, and how to get back on track. Lynn Parramore […]

Patrick Cockburn – Putin has Grossly Overplayed His Hand, But NATO Could be Making the Same Mistake as It Senses It’s Winning

A resolution to the Russian-Ukraine war becomes increasingly complicated Patrick Cockburn is the author of War in the Age of Trump (Verso) Cross-posted from Counterpunch Photograph Source: President.gov.ua – CC BY 4.0 By invading Ukraine two […]