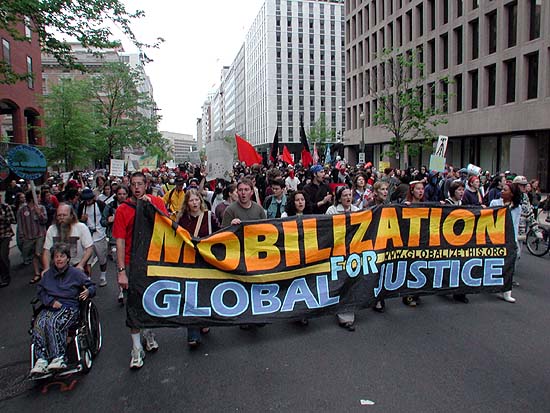 Is it possible to define a series of approaches to global problems for the group of people who may be called “global progressives” (GPs)? Before I try to answer this question, I need to define the terms. “Progressive” is meant to include all those who identify with broad left-wing movements, from Marxists to social democrats and even to the fringes of liberals (in the American sense of the term). “Global” is supposed to cover issues that can, at least in principle, be either acted upon or actively pursued on a global, as opposed to national, level. “Approach” is supposed to mean activities that are between policies (since global policies are extremely rare, and most policy-making is made at the national or local level), and the rather vague “values” or “opinions.” “Approach” therefore stands between “policies” and “values” and has an activist component attached to it, which moves individuals and groups beyond mere expressions of what they believe or hold dear. But it is less than policy simply because the world has currently very few such tools at the global level.

What are the areas were such global approaches can be defined? The seven areas listed here move from the final objective which is higher income (and the attendant greater “happiness”) to the means to realize it, which concern capital, labour, technology, and taxes.

Economic growth. It is true by definition that economic growth is an indispensable condition for the reduction of global poverty. Reduction and ultimately elimination of global poverty (at whatever modest poverty line one can envisage today), is probably the most important task in the 21st century. Nobody in the world should live in misery. In order for this to become reality, GPs must be in favour of economic growth, and especially so in poor and middle-income countries. Higher economic growth in poor and middle-income countries would also reduce global inequality which may be considered as the global goal No. 2 for this century. Reduction of material inequality between individuals in the world is a requirement for the existence of a global (however weak) community of interests and values because such community cannot be based on vastly different levels of material welfare.

Climate change. The focus on global poverty elimination and global inequality reduction must be considered within the framework where climate change is an important challenge to many people. While some trade-off between global growth and the means to combat climate change may be allowed that trade-off must acknowledge that economic growth is the most important global objective. Global growth and control of climate change are not lexicographically ordered (with growth coming first) because that would exclude any trade-off between the two. But the trade-off must be such as to prioritize growth-compatible methods of control of climate change: “green growth” brought about by suitable (and subsidized) technological progress, and change in consumption patterns brought about by subsidies and taxes. All of these tools however are national, and GPs cannot affect them much at the global level. However, since the issue of climate change has acquired worldwide importance and is subject of international cooperation at the level of nation-states, a unified approach by GPs may make a difference.

It is obvious from the above that GPs should not be in favour of degrowth because it would negatively affect elimination of global poverty and reduction of global inequality.

International aid. GPs should be in favour of rich countries finally achieving their pledge (made more than half-century ago) of transferring 0.7% of their GDPs in the form of aid to poor countries. This objective, however modest, has recently receded in importance and public concern because of sluggish growth in rich countries and the rise of Asian middle-income countries. But the objective is still crucial given vast inequalities that exist between countries and peoples.

Global aid should not be confused with purely commercial transaction (like foreign direct investments) and loans by national or international development agencies that are only in part aid (to the extent that the interest rate charged on loans is below the market rate).

Migration. GPs must be in favor of free movement of people. This derives from the first principles of equal opportunity which, for those who think globally, must be equal opportunity at any point in the world, and not solely within one’s own country. It derives also from the support of globalization which includes free movement of capital, goods, services and technology. There is no reason why labour should be treated differently. But that principle must be, within each individual country, moderated (and in some cases modified) to be compatible with what is politically feasible. While various compromises and temporary solutions are possible, one should not forget that it must be done with the principle of free movement of people always in the background and not being forgotten.

Technology. GPs must in favour of facilitating transfer of technology from rich to poor countries. It is one of the principal ways in which growth of poor countries can be accelerated. Recent exaggerated concerns about the protection of intellectual property rights are not only antithetical to the achievement of global poverty eradication but are at variance with rich countries’ own stated objectives, repeated over many years, of being in favour of easing transfer of technology to poorer countries.

Equality between countries. This is an important principle that, like in federal countries’ constitutions, must be balanced with the approach mentioned above regarding global poverty elimination which treats all persons in the world (not countries) as equal. But treatment of all countries equally implies non-interference in their internal affairs so long as they do not have implications beyond their borders, and preference for the organizations like the United Nations that are, at least in principle, built on the assumption of equality of nations. It also means that international institutions like the World Bank and the International Monetary Fund which are built on the principle of richer countries having greater rights should be forced to move toward greater country-equality. (The same applies to the World Trade Organization which is in fact biased in favour of rich countries.)

What cannot be dealt with globally? The issues that can be addressed only at the national level are those that belong to inequalities of opportunity and outcome. It is already mentioned that global equality of opportunity can be helped by being pro-growth, pro-migration, pro-technology transfer, and pro-aid. But most of inequality of opportunity is nationally-based and can only be dealt with at that level. This includes inequalities linked to one’s background (wealth of parents), gender, race, caste, or sexual orientation. Inequalities of outcome (in income and wealth) can also be remedied mostly nationally through higher taxation of inheritance, more accessible education, higher income taxes for the rich, deconcentration of financial wealth (through worker shareholding) etc. But these objectives, however laudable, cannot be currently addressed at the global level.

While the just discussed group of objectives cannot be dealt globally because the means to do so are national, another group of objectives cannot be included because a global consensus on them, even among the global progressives, is impossible to reach. They are philosophical and political issues such as alienation of labor, hyper-commodification of life, and political systems of different countries. Thus they have to be left aside.

Mathew D. Rose – How the EU has become an incubator for fascism

What no one is considering is that the resurrection of fascism in the EU  could well be a logical consequence of the EU’s policies of the past decades, actually stabilising the European Union and allowing […]

This is being replicated in the EU By Hannah Dewhirst, Campaigner at Positive Money Cross-posted from Positive Money The government’s new Build Back Better council – meant to help the UK recover from the impact […]