Quite an interesting article bringing together a number of important points into a single mould consisting of four planks.

When I recently had a discussion with Alex Hochuli and Philip Cunliffe at their podcast (you can listen to it here), they mentioned one of my pieces on what I called the paleo-left. In the podcast, I went over the main features of the paleo-left, and I think that it may be useful to put them down again in writing. And hopefully to show that they can be readily made into actionable policies and are not just a set of nice words strung together.

The paleo-left agenda, in my opinion, has four key planks: it is pro-growth, pro-equality, for freedom of speech and association, and for international equality. Let me explain each.

Being in favor of growth means that the paleo-left acknowledges that income and wealth are indispensable conditions for human self-realization and freedom. We cannot achieve our potential, nor enjoy other non-pecuniary activities unless we have enough income not to worry where the next meal comes from or where we are going to sleep the next night. The paleo-left is against the constant denigration of growth because it recognizes that for an ordinary person improved material conditions of living open the “realm of freedom”: we do not want households where mothers have to wash clothes in the nearby creek or in the bathtub; we want households with washing machines. (Of course, for people who already own washing machines this might seem like a trivial demand. But for half the world that does not it is not trivial at all.)

Growth as such without taking into account who benefits from it is neither ethically acceptable, nor politically sustainable. That’s where the second plank comes in: economic equality. Growth cannot be blind, nor can it be such that most of it, like in the US in the period 1986-2007 (see the graph below) is collected by the rich. It must be pro-poor which means that incomes of the lower groups should rise, in percentage terms, at least as much as incomes of the richer groups. How to achieve this? Not only through direct taxation or indirect taxation of activities and goods consumed by the rich (the latter is an area which is, in my opinion, under-utilized). It can be achieved through high inheritance taxes which would ensure reasonably equal starting position regardless of parental wealth, by almost free or fully free public education and health, and by special support for the young, around the time of their first jobs. The young are now in the developed Western societies as a group in need of as much support as what people who are currently old managed to politically achieve in the 1960s and 1970s. 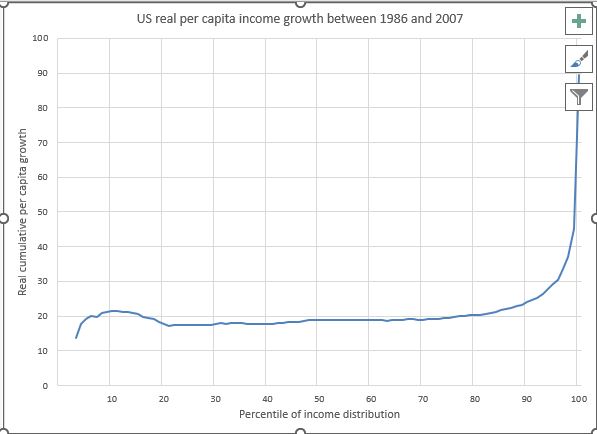 Reduced income and wealth inequalities are both an objective in themselves and a tool for achieving something else: relative political equality. That equality is undermined in today’s advanced societies not, as it is claimed, by an ill-defined “populism”, but by a very opposite danger: that of plutocracy. The fact that rich people fund the campaigns, pay politicians (which is just a more subtle form of bribery), and control most of the mainstream media, makes mockery of political equality.

Instead the paleo-left should focus on something much more real and measurable: approximate political equality. The latter implies public financing of political campaigns, limits (or bans) on rich people’s control of the mass media (no “Washington Post” ownership for Jeff Bezos), and equal participation in the electoral process which in turn means making participation in the elections easier for hard-working people. Current elections in the US are intentionally scheduled for a working day, and it is neither a surprise, not an advertisement for “democracy”, that even in the most important elections one-half of the electorate simply does not participate.

The paleo-left also recognizes that the freedoms of speech and association are largely meaningless so long as approximate political equality does not exist. Individuals can spend hours and days complaining on Twitter, but it will carry zero political influence as compared to the well-paid and organized think-tanks and other institutions whose objective is to directly affect policy. It is in that area that a vague use of the term “democracy” in reality conceals vast inequality in access to political power.

The last plank is internationalism. This is, of course, an old left-wing slogan, and it should not be seen as something that is just tacked on to the rest of the domestic agenda. It is a constituent part of the overall agenda. The paleo-left accepts that different countries and cultures may have different ways in which they choose their governments or in which they define political legitimacy. The paleo-left is not ideologically hegemonic. The paleo-left might believe (and should believe) that its own approach is the best, and is right to argue for it, but the argument must be always at the level of ideas, must avoid gross interferences in the internal affairs of other countries, and must obviously never use violence. The paleo-left must get rid of the noxious idea of a “liberal world order” which is either meaningless (as it changes depending on what is politically convenient for its proponents) or is an outright invitation to wage wars. It replaces it by the respect of international law as defined by the United Nations, and by other institutions that are inclusive of all peoples. The paleo-left proselytism is made only by non-violent means, and with respect for other cultures and states, and no coercion of any kind.

There are many other issues that cannot be directly covered by these simple rules. They concern migration, gender and racial equality, relations between the church and state etc. but they can be, I believe, relatively easily deduced from these four general principles.

Anyone concerned about climate change, the Green New Deal, or Degrowth is well advised to understand Modern Monetary Theory. Richard Murphy is a Visiting Professor of Practice in International Political Economy, City University of London. […]

“There’s a decent chance, it seems to me, that is, that victory for university workers in this dispute would provide a major boost for organized labour generally.” Ed Rooksby teaches politics at Ruskin College in […]