To understand Coronavirus crisis in Spain, it is essential to understand its history of endemic corruption, in this case of public services, that is driven by politicians guided by Spain’s large financial interests (banks and vulture funds).

Carlos Rodriguez Expósito is a specialist in telecommunications. Community Manager of Taxi Project de Élite Barcelona. Collaborates actively with the space No Mas Precariedad, formed by dozens of collectives in struggle and with 404 Comunicación Popular, the media of the social groups. 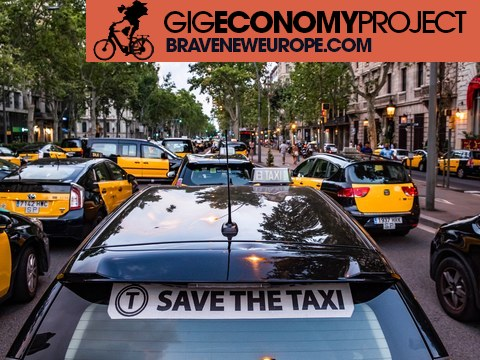 I do not intend to make an in-depth analysis of the subject, because I am not an expert, but I would like to give my view as an ordinary citizen and worker to the rest of my colleagues on what is happening to us in this country, because it is the result of years and years of corruption. And because of that corruption we are letting people unnecessarily die.

It all comes down to the same method. Let us start with the regional governments, especially from the regions of Madrid and Andalusia (presided over by the conservative Partido Popular together with the neo-liberal right, the Citizens’ Party (Ciudadanos). The system is simple and used by all neo-liberal governments throughout Spain and the world: they cut back on staff, stop investing in infrastructure and resources, thus lowering the quality of public service. Once these financially diminished public services have lost the capacity to provide satisfactory services in optimal conditions, the same government that has created this situation, claims to have no alternative and hands over the management of these services from public to private hands.There is No Alternative, the government claims – only the private sector has the means and capacity to improve the service.

The politicians transfer these services (at very favourable conditions for the company), to private companies with connections and links to members of the government party, either through common business interests, outstanding favours, or in the case of banks, through financial interests. To be clear, the Spanish state during the period when the right wing governed, has been phasing out public services to hand them over to the finance vultures and companies of the “good old boys” thereby destroying these services, as has happened with our public health system.

It is simply capitalism gaining new profitable businesses through corruption, literally stealing public services to manage them for its own profit and not for the benefit of society: classical neo-liberalism, which has nothing in common with a free market.

These are the capitalist interests from the period of the Franco dictatorship, which have created an alliance with the so-called “liberal-democratic” political parties. This alliance has concentrated its efforts on plundering public services for their own profit. This new political class in Spain, like the one before it, has always seen the workers as cattle and public institutions theirs for the taking. In Spain opportunists always seem to find their way to the political corridors of power.

Once private enterprise receives the money of the state or the community to manage public services, most of that money is not spent on improving those services as it was meant to do, but a great part is siphoned off to these private enterprises. It is not reinvested, instead often disappearing into tax havens, leaving the public service and Spanish citizens even worse off than before. At the same time this privatisation does not reduce the national debt as claimed by politicians, but increases it.

And when a crisis such as COVID 19 comes along, the whole scam becomes visible for all to see. Thousands die because there are not enough resources in the Public Health Service. There are not enough beds for the sick, there is a dearth of health personnel, there are too few doctors (many of whom have immigrated to the North), and the necessary equipment, protective material to operate. All this is due to the corruption of capitalism, which no longer tries to make a profit from its own money by exploiting workers, but usurps public money to continue making a profit through extractive practices which lead to the death of people.

There is so much corruption and business crime in the Spanish state, that its citizens have become inured to it. They do not even notice it anymore. It seems as if every day there is a new political corruption scandal in Spain. Politicians, especially from the right of this country as well as from the social democratic left (PSOE), are involved. All systematically steal in all sectors. Even some of the traditional workers’ unions (UGT) have stolen their workers’ money.

The method is always the same, not surprisingly very similar to mafia practices; lowering the quality of the service to sell it or turn it over to a friend’s company. Public health, public transport (EMT, Metro, Taxi), energy, telecommunications, banking (Bankia case), water (Canal de Isabel II), ERTES in Andalusia (aid money for unemployed workers). The list is endless….

We have even seen, from in our struggle against the taxi platforms like Uber and Cabify how the CNMC, Spain’s state regulator to prevent monopolies detrimental to the the consumer, have repealed and modified laws to the benefit of Uber and Cabify. They have totally liberalised the transport sector, thereby damaging the mobility systems of the cities, turning it over to an oligopoly of two companies. These have the capacity to initially make enormous losses to monoplise the market, later to increase prices radically. Their system, approved by the CNMC, also weakens environmental laws, thus contributing to increased pollution in our cities.

The CNMC as an instrument of control to protect the Spanish consumer instead assists foreign multinationals to financialise services on which the public relies (‘Uberisation’). They no longer protect Spain’s citizens and environment. The government of the time, the Popular Party, played an integral role in this process. Spanish banks financed the Transport Vehicles with Driver (VTC) companies, which had acquired the necessary large fleets of cars to serve Uber and Cabify. This otherwise rather limited VTC sector was suddenly authorised by the CNMC to serve both Uber and Cabify, even turning a blind eye to the fact that the legal limit of cars that can be registered for this branch was exceeded. Thus the Spanish political class could serve both Uber/Cabify and their traditional “patrons”, the Spanish banks. Only the Spanish citizen loses out – but that is in the nature of neoliberalism. In this case especially we taxi drivers will be the victims of this corrupt alliance. But others will follow as all the public services are financialised.

Seaya Ventures (literally related by family to BBVA bank) is one of the most important investors in Cabify. Lazards is the owner of ‘Moove Cars’, a company, which operates in the main cities of Spain and has the largest fleet of chauffeur-driven rental cars in the country and works exclusively for Uber.

And all this talk about the fact that VTCs are publicly authorised, the corrupt Autonomous Communities (especially Madrid and Andalusia) that allow private business to be done with public passenger transport permits.

As they say of the Spanish state: “everything has to do with everything else” and the interests of “crony capitalism” corrupt everything.

The public institutions of the Spanish state have been bending over backward to serve the interests of capital and Uberisation, but are not the least concerned about the well-being of its workers.

All of this is hidden in their mainstream media, whose sole purpose is to influence public opinion. Like the Spanish political class, our media serves the particular interests of capital and to a large part belong to those companies that systematically steal from public services.

There should be a revolution. The people, the citizens, the workers of the Spanish state should rise up, but the system’s media already take care of manipulating the message and hiding the facts so that nothing changes and in the same way, the system ensures that we are afraid. Fear of being unemployed, fear of not being able to have an income or fear of not having a future for our families. And that fear prevents us from stopping to think about what is happening so that we can change it from the street.

This is roughly what defines the Spanish state in recent years. Governments and media moved by capital and corruption. A state where people die because of the interests of financial power, neoliberalism, and the most savage capitalism.

But let us hope that this will change, because amidst so much drama and so much despair there is always a glimmer of hope. The hope that people will organise and rise up. That the rights of all and public services will be defended. That the current government of the Spanish state (Podemos-PSOE) will act responsibly and save the people and not the banks.

We hope that everything will change.

Ben Wray – The Gig Economy Couriers: Operating Precariously at the Connection Points of the Covid-19 Economy

BRAVE NEW EUROPE has always considered the Gig Economy one of the most important economic developments of our time. Unfortunately it is totally ignored in mainstream media and by much of academia. The Lipman-Miliband Trust […]

Why should capitalism be “Saved from itself”? Michael Roberts is an Economist in the City of London and prolific blogger Cross-posted from Michael Roberts Blog Joseph Stiglitz is a Nobel (Riksbank) prize winner in economics […]