As we observe the inexorable decline of Social Democrat parties throughout Europe (Britain seems to be about to follow), one can literally see how once progressive parties have been destroyed through terminal neo-liberal cancer. And the jury is still out in how far the independence movements in Catalonia and Scotland are progressive, or simply the conservative national bourgeoisie in folkloric costumes. 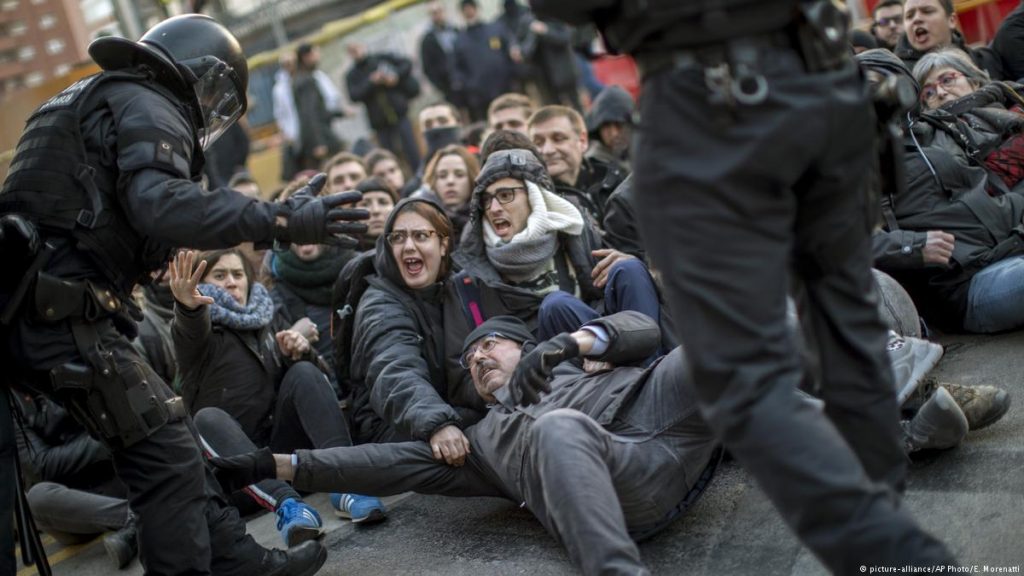 The British Labour Party is in the process of electing a new leader. In the wake of their drubbing in last December’s UK General Election I suspect that is not arousing great interest across Europe. After all the Conservatives under Boris Johnson now have a solid majority in the House of Commons and can proceed their merry way with Brexit.

But the leadership contest in the Labour Party has thrown an interesting light on how the candidates see dealing with the national question, in this case in Scotland and Catalonia.

One of the candidates, Lisa Nandy, stated during a television interview that:

“We should look outwards to other countries and other parts of the world where they have had to deal with divisive nationalism and seek to discover the lessons where, in these brief moments in history in places like Catalonia and Quebec, we have managed to go and beat narrow divisive nationalism with a social justice agenda.”

Nandy seemed unaware that on 1 October 2017 the Spanish government sent in paramilitary police to smash their way into polling stations, batoning voters, to stop a referendum on independence sanctioned by the Catalan Parliament. Subsequently, the right-wing Popular Party on Mariano Rajoy, imposed direct rule on Catalonia and the criminal prosecution of Catalan leaders began which concluded last Autumn with nine being sentenced to lengthy jail sentences having been found guilty of sedition.

Clearly someone reminded or told Nandy of this because in a blog post published after the interview, she said that socialists in Catalonia have “for years been peacefully resisting the advance of separatists there”.

Adding that “recent indications suggest that their democratic efforts may well succeed” and that there are “hopeful signs their approach of socialism and solidarity – which stands in stark contrast to the unjustified violence we saw from the Spanish police operating under the instruction of Spain’s then right-wing Prime Minister Mariano Rajoy – may yet win out.”

But what she does not say is that the opposition Socialist Party supported Rajoy in attempting to stop the referendum and on gaining office Pedro Sánchez, the Socialist Premier has done nothing to stop the Spanish judiciary prosecuting hundreds of Catalan mayors, councillors and activists.

Yes, Sánchez has now promised talks with the Catalans, the price of getting the centre left Catalan Left Republicans abstaining on a vote to allow him to form a government, which just passed. But Sánchez insists any possible solution must be within the terms of the Spanish Constitution which stresses strongly the indissoluble nature of the Spanish state.

Far from support for independence falling it has grown from when, at the start of this decade, it was very much a minority sport. While Catalans are easily divided over independence that changes to clear support for the right of the Catalan Parliament to hold a referendum (something all Spanish unionist parties oppose), even more when asked if they support the monarchy (Felipe V has very publicly opposed any possible break away) or whether they oppose the jailing of Catalan leaders.

There is little sign a “social justice agenda” is near to trouncing support for independence in Catalonia or, it must be said, in Scotland. In the December UK election Labour was reduced to just one seat in Scotland while the pro-independence Scottish National Party won 48 out of 59 seats (that includes a candidate who the party disowned mid-way through the election) taking 45 percent of the vote.

This hasn’t stopped another of Labour’s leadership contenders, Jess Philips, has described the SNP’s demand for independence as a “threat to opportunity and equality” for working people in Scotland, saying she is “100% committed to the union”.

Phillips added: “Labour believes in the union because we believe in redistribution, because we want to bring people together, not divide them, and because our compassion doesn’t end at an imaginary line on a map. Let nationalists make the case for nationalism, we should make the argument for solidarity and internationalism.”

She is the right-wing candidate for the leadership and will not win but what she says chimes with many in Scottish Labour, especially those still hankering after the glory days of Tony Blair and New Labour. Several Scottish Labour candidates decided to concentrate their fire on the SNP and the likelihood of a second referendum on independence, not mentioning the leader of the UK Labour Party, Jeremy Corbyn, or his radical manifesto promises.

Many, especially younger Labour supporters did support Corbyn. In one exchange it was explained to me that a Corbyn win would open the way to a socialist advance across Britain and that “class politics” must trump “nationalism.”

Leaving aside Scottish Labour’s dismal showing (which was obvious from polling during the campaign) and Labour’s defeat in England and Wales this was a crude and wrong counter position.

In Scotland and Catalonia, we are not seeing blood and soil” nationalism which regards the English and Castilians as enemies. Many, the majority of those supporting independence identify themselves as pro-independence not nationalists. In both cases they take pride in fellow citizens who originate elsewhere who support independence. In Scotland that includes many English and many more EU citizens (one of the three SNP MEPs is French).

They do so because they see it as the right, a democratic move. In Scotland to escape rule from Westminster be the Conservatives who have not won an election in Scotland since 1955 and because most Scots want a more pro-welfare agenda (a social democratic one, if you like). In Catalonia it is to escape the centralist agenda of successive Spanish governments, including Socialist ones, and the corruption inherent in the Spanish state (which infects Catalonia too).

Counter-posing “class politics” to support for independence misses this out and misses out that in the 2014 Scottish independence referendum the Yes vote was rooted in working class communities and among the young.

When Scottish Labour elected a left-wing leader, Richard Leonard, many assumed he would revive the party’s fortunes with a left-wing agenda. Leaving aside he has proved a dud the party’s opposition to independence and its habit of focusing fire on the SNP and not the Tories meant such hopes were still born.

One reason why the left is sometimes at sea over the national question is in the years of neo-liberal triumph much of its theoretical heritage has been ditched like the baby with the bathwater.

At the onset of the 20th century there was a vibrant debate over the national question in the international socialist movement involving Lenin, Rosa Luxemburg, Karl Adler and many others. In the 1960s and 70s the radical left drew on that in order to throw themselves behind the Vietnamese and others, and then to hope, wrongly, armed struggle in Ireland and the Basque Country, would bring Vietnam to Europe.

Of course, among Social Democrats there was also a right wing which justified colonialism and imperialism, and which identified with their “own” state. So, Philips’ appeal to “solidarity and internationalism” rather misses out British Labour’s support for the First World War or the 2003 invasion of Iraq. It misses out too on its record in office regarding colonial wars in Malaya or its slavish support for Washington.

But returning to those debates at the start of the last decade. Support for independence should be based on whether it is powered by a democratic instinct. National oppression was crucial, but it should also apply to the aspirations of independence supporters in Scotland and Catalonia and not to those genuine nationalists who target Muslims and migrants.

And it might also explain why “class politics” (a phrase of little meaning to those under the age of 40) is not counter posed to support for independence. Rather in the cases of Catalonia and Scotland people see it as a hope for a better society. A modest enough aspiration but one that should be supported.

The Film “The Spider´s Web” has been released in youtube. A film one has to see to understand finance capital in Britain and tax havens. Sponsor the next film on Patreon: https://www.patreon.com/independentdo… Here our review […]

The EU and ECB have great difficulty with transparency and explaining the justification for its actions.It is no wonder that its democratic credentials are in such shambles. Fabio De Masi is a  member of  Germany’s […]