Spain is currently not a beacon of democracy in the EU. Its cack-handed manner of dealing with the Catalan independence referendum and ensuing inexorable persecution of Catalan politicians has little to do with democracy. This is something most Spaniards appear to support. Good, Spain does not have much of a democratic tradition and even the king has lost the script. As Chris Bambery writes, tolerance has never been a quality that Spain has embraced.

Chris Bambery is co-author of Catalonia Reborn (Luath Press, appearing in May 2018). He has written a number of article for BRAVE NEW EUROPE concerning Catalonia 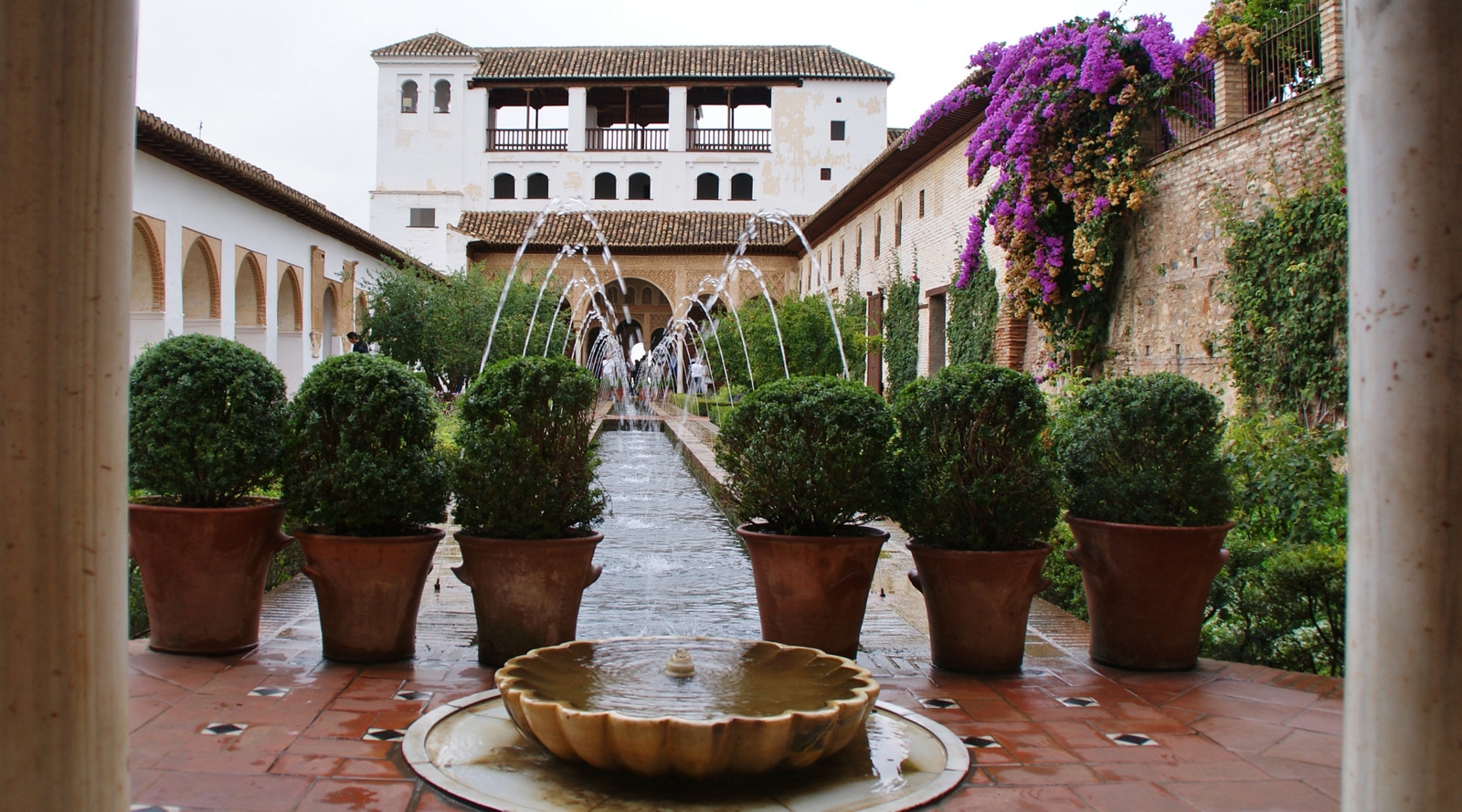 A Muslim friend who, while on holiday, entered the Mezquita in Cordoba to be immediately pounced on by a security guard who gruffly told her, “no praying.” She was wearing, as always, a Hijab.

The Mezquita was, of course, Cordoba’s biggest mosque built when it was capital of Al Andalus and begun in the 8th century CE. By the new millennium it was the biggest city in Europe. To journey there from Paris or London would be to enter a different world, one with sewage and even street lights, where people bathed regularly and changed their clothes, but above all one where knowledge was treasured. Here Muslim scholars worked translating the great works available of Greek and Roman civilisation, at a time when the Catholic Church elsewhere in Europe kept them under lock and key. They co-operated with Christian and Jewish scholars in a civilisation which allowed a degree of religious toleration which did not exist in Christendom. Non-believers had to pay extra taxes but were allowed to practice their faith. It wasn’t paradise but Jews were safer in Muslim lands like Al Andalus than in Christendom.

In 1236CE Cordoba was captured by the King of Castile, an important moment in the reconquest of much of the peninsula and the eventual creation of Spain. A Christian cathedral was built plum in the centre of the Mezquita and the minaret from which the call to prayer had issued became the cathedral tower. Much later in the 16th century CE Emperor Charles V allowed an extension of the cathedral with a new nave driven through this fantastic piece of Islamic architecture. Later when he viewed this piece of vandalism he remarked, “You have destroyed something unique to build something commonplace.”

Today I love Cordoba. When I visit the Alhambra in Granada I always come away with a sense of melancholy because this was the last capital of Muslim Spain and its fall effectively ended a great civilisation. In Cordoba I get a sense of what the city was in 1000CE, I can visit one of many synagogues which existed then, as well as wonder at the Mezquita.

Yet there is something that angers me. When I mention the incident which befell by friend to other Muslims who’ve visited the city they tell me similar happened to them. More incredibly, both Jews and Muslims have pressed for inter-faith services in the building but they have been regularly refused by the Church authorities in Andalusia, backed up by the Vatican.

The Catholic Church has taken advantage of a legal loophole which allowed it to claim ownership of what was once a public building, arguing that they have owned it since the 13th century CE (ignoring who owned it previously).

Back in the 1990s the Mezquita was formally described in official literature and guide books as the Mosque-Cathedral of Córdoba. In 1998 the Catholic Church changed that to the “Cathedral (former Mosque)” and since 2010 to “Córdoba Cathedral.”

All of this came back to me when I read of the recent formation of the Fundación Civilización Hispánica (Hispanic Civilisation Foundation) which has set itself the task of countering the leyenda negra, black legend, highlighting the horrors of Spanish colonialism and religious persecution nearer home.

His claim is that the British, USA, France and Holland have carefully cultivated their image to smooth away colonial sins and therefore boost their self-image. Spain has failed to do this and has low self-esteem. Furthermore, responsibility for the leyenda negra lies with British and Dutch propaganda in the 16th and 17th centuries, with their strong anti-Catholic bias.

Not for a moment should we forget or forgive the crimes of, say, the British Empire, but in the brutal history of European colonialism the Spanish were first on the stage, alongside their neighbour Portugal, and pioneered the destruction of indigenous people.

But the Fundación’s claim that blame for the leyenda negra lies with its neglect by Spain flies in the face of the simple fact that celebration of it has been at the heart of Spanish nationalism and the Spanish state has all too often celebrated colonialism and religious intolerance.

If Spain has a birth date it is the capture of Grenada in January 1493 by the Catholic monarchs, Isabella of Castile and Ferdinand of Aragon, whose marriage had united what is now, in essence, the Spanish kingdom. According to Spanish nationalist iconography, Ferdinand and Isabella would create for the first time a unified Spain on the Iberian peninsula, expel Moorish and Jewish influence, establish a common Catholic culture with a little help from the Inquisition, finance Columbus to “‘discover”’ the Americas, and begin the foundation of a gigantic empire on the other side of the Atlantic. This Spanish Empire would then transform the arid Iberian plateau into the richest and most powerful kingdom in all Europe.

Castile was the dominant kingdom in the new set up. It was shaped by the long reconquest of Muslim lands, not least in its Catholic fundamentalism.  Aragon, effectively a Catalan kingdom, had been won back from the Muslims much earlier and the reconquest was never as central. After the creation of Spain’s American Empire the Catalans were formally barred from trade with the colonies, a ban which remained in place until the end of the 18th century.

The end of Spain’s Empire came in 1895 with the rebellion in Cuba and the defeat of Spanish forces by the island’s rebels backed, for its own interests, by the USA.

The Cuban disaster also led to a rise in Spanish nationalism. In 1908 a law was passed to ensure that public buildings flew the national flag. Numerous monuments to monarchs and national heroes, real or imagined, were erected across Spain. In 1919 the Day of the Race was made a national holiday. A Law of Jurisdictions passed in 1906, restricted free speech with the justification that Catalan nationalists were acting ‘against the Fatherland.’

When General Franco became head of state after his victory in the Spanish Civil War, he attempted to identify his regime with the days of Ferdinand and Isabella adopting their coat of arms with the imperial eagle as his regime’s own.

The motto of the Franco dictatorship was  España, Una, grande, libre and Caudillo adopted  the Yugo y flechas, Yoke and arrows, emblem of Isabella and Ferdinand, which you saw everywhere if you visited Spain under his dictatorship. When Barcelona fell to Franco’s troops at the close of the Spanish Civil War Catalans were ordered to “speak the language of Empire,” their language being banned in public, in print and from schools.

But the regime attacks on Jews and Freemasons as well as Communists echoed the earlier intolerance of the new Spain’s Muslim and Jewish populations. The Spanish Inquisition was created to check that converts were eating pork, attending church services on Sundays and not bathing too often.

This all might seem ancient history but in recent years, under successive Popular Party governments, Spanish nationalism has made a comeback.

Since 2001 the world’s largest Spanish flag has flown in Madrid’s central Plaza de Colon, named after Columbus, first raised on the Fiesta Nacional de España, Spanish National Day. This marks the day, 12 October 1492, when Columbus (Colon in Spanish) first landed in the Americas. It was first established in 1935 by the right wing government whose defeat at the polls by the left a few months later led to the Civil War. Originally known as the Dia de la Hispanidad, the supposed Spanish speaking global community which shared a common culture, it was made a public holiday in 1981 by King Juan Carlos. The title was changed in 1987 because of its associations with colonialism and the destruction of indigenous peoples. plus the notion of Hispanidad was linked to the right and to Franco.

Today the King and the Spanish prime minister preside over a massive military parade in Madrid. In 2017 the foreign legion, key to Franco’s victory, was given pride of place and for the first time the Guardia Civil took part, just over a week after they had been deployed in Catalonia to try and stop the independence referendum, smashing their way into polling stations, seizing ballot boxes and attacking voters.

The Spanish defence minister, speaking in front of the VIP tribunal announced that “unity makes us strong.” From the crowd, bigger than usual in response to the threatened break away by Catalonia, there were cries of Viva España! But also “Jail Puigdemont”  (the Catalan president). The Guardia Civil contingent was warmly received with chants of “Long live the Guardia Civil”’ and “‘We’re proud of our police.”

Borja Cardelús denies there is any political significance to the establishment of the new  foundation says that its creation at the time of the political crisis in Catalonia is coincidental.

Yet while much attention has been focused on Catalan nationalism less light has been shone on the Spanish nationalism which is driving much of the Rajoy government’s response to the independence bid.

Guillem Colom-Montero – ‘COVID Summer of 2020: From Overtourism to No-Tourism in Southern Europe’

Many EU citizens witnessed how their cities have become tourism commodities, Disneylands in the EU economic master-plan. With COVID-19 they have re-discovered their home towns and civic culture. Guillem Colom-Montero is a Lecturer in Hispanic […]

Paul Kennedy, David Cutts – What the Castilla-León elections told us about the trajectory of Spanish politics

How the neo-fascists  are moving into mainstream politics in Spain Paul Kennedy is a political scientist who has published extensively on Spanish politics. David Cutts is a Professor in Political Science in the Department of […]