As the Spanish prosecution sums up its arguments against twelve leaders of the Catalan movement for self-determination one can hardly find words to describe this travesty of justice. Chris Bambery did find one: Bollocks.

In the autumn of 2017 a “a coup d’etat” was launched in Catalonia involving “illegal, coercive methods, [and] using violence when needed.” The goal was to “revoke, suspend or modify the Spanish constitution.” In sum:

“It was a serious attack on the foundations of the constitution with illegal, coercive methods”

At this stage most readers will be scratching their heads thinking how can I have missed that, a violent putsch in Spain. It must have dominated the news agenda globally and been the subject of strong denunciations from Washington, Berlin, and Brussels.

Before you get too worried about your memory this was the claim of Spain’s Public Prosecutor in summing up the prosecution’s case against 12 Catalan political and civic leaders charged with “rebellion” and “sedition.” Their crime? To organise a referendum on whether Catalonia should choose independence or not.

Spanish Public Prosecutor Javier Zaragoza alleged these accusations applied to all 12 of those in the dock but he especially targeted the former Catalan vice-president, Oriol Junqueras. “I believe Junqueras is the main driver behind the referendum.”

Zaragoza demanded a jail sentence of 25 years for Junqueras.

Regarding the former Catalan Interior Minister, Joaquim Forn, Zaragoza said he should also be found guilty of the charges against him, that he was also warned against pursuing his actions in ensuring voting went ahead and that he deserved a similar sentence.

The Public Prosecutor went on to say that there was an exceptional state of affairs in Catalonia that autumn. The Catalan police, the Mossos, were under the effective direction of two of the accused, civic activists Jordi Cuixart and Jordi Sànchez, schools were closed so they could act as polling stations and the population was urged to take to the streets

Zaragoza also denied that the nine of the accused who have been kept in jail under preventative detention are political prisoners.

He also rejected the report of the UN Working Group on Arbitrary Detention’s report which urged the “immediate” release of the leaders, questioning its validity and accusing it of ignoring Spain’s arguments.

Following Zaragoza a second Public Prosecutor, Jaime Moreno, went on to argue that the defendants used violence –which must be proved if the rebellion charge is to stick.

Regarding the violence of the Spanish Police against voters on referendum day – something which did dominate news stories internationally – he described that as ‘legitimate’ for maintaining the mandate of Spain’s Constitutional Court which had declared the referendum illegal. Adding that the referendum was not a matter of democracy since voting must comply with the law.

‘There was violence, it was necessary for their cause, the accused knew the vote would provoke confrontations, and yet they still called people to vote knowing what would happen.’

Moreno referenced violence against police trying to stop voting and damage to Spanish police cars during a raid on the Catalan Finance Ministry on 20 September 2017. For him such actions could not be described as a ‘protest’ and added that all of the defendants knew there was going to be violence on the day of the independence vote.

A third Public Prosecutor, Consuelo Madrigal, concentrated on charges of misuse of public money stating that all the defendants should be charged with rebellion for the misuse of an estimated 3m euros in public funds.

Referring for referendum adverts on Catalan public broadcaster TV3, she argued that even if they were broadcast for free they still represented a cost to Catalan taxpayers She also added that Diplocat, the Catalan diplomatic body, made illicit payments by inviting ‘foreign observers’ to Catalonia during the October 2017 referendum.

In her view the Catalan Government was fully responsible for the misuse of public funds in regards to the referendum which violated the Spanish Constitution, and that the defendants should be subject to rebellion charges.

A fourth Public Prosecutor, Fidel Cadena, pressed for all to be found guilty of rebellion, despite the fact that no military rebellion took place, because they violated the constitution and the very foundations of the Spanish state.

His claim was that the Spanish government had to send police to Catalonia during the days surrounding the referendum to defend the Spanish state.

After lunch it was the turn of Spain’s Solicitor General, Rosa María Seoane, who presented the final accusations against the 12 demanding jail sentences of up to 12 years for the crime of sedition.

According to Seoane, the independence referendum had involved three main actors: the Catalan Parliament, the Catalan Government, and civil society leaders.

Explaining why she is pushing for the crime of sedition, and not rebellion she told the Court, ‘the use of violence was not central to the independence bid,’ she said.

Lastly it was the turn of the last Prosecutor, Javier Ortega Smith, one of the lawyers for the fascist Vox Party who demanded prison sentences of up to 74 years for criminal association, misuse of public funds, and two crimes of rebellion; claiming the accused carried out ‘the most sophisticated and original coup d’état against a democracy ever seen in a modern society.’

In this version the accused were part of a ‘criminal organisation’ whose ultimate goal was ‘carrying out a rebellion’ and ‘abolishing Spain’s constitutional order’.

Tough sentences were necessary ‘so that no one dares to attack the constitutional order again’.

After the Prosecution case had ended defence lawyers requested more time for their closing arguments next Tuesday. Public Prosecutors were granted three hours to justify the charges of rebellion. Courtroom President Judge Manuel Marchena dismissed their petition, and confirmed that defence lawyers will have one hour to defend each of the accused.

I was told by one insider that members of the European Parliament and politicians elsewhere in the EU are staying quiet until sentencing and will then speak out, and that many thought that if Spain were applying for EU membership today it would be refused.

There is undoubted disquiet among growing numbers of MEPs and European parliamentarians, but my bet is that the EU and European governments will hide behind their mantra that Spain is a democracy and the independence of the Spanish judicial system must be respected. 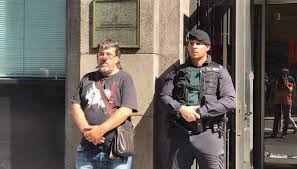 But on 1 October 2017 the scores of Parliamentary observers in Catalonia to record proceedings were unanimous that violence was entirely on the side of Spanish Police. That is what millions witnessed on their TV screens and social media.

There is truth and there is the narrative of the prosecution at the Spanish Supreme Court last Tuesday.

Meanwhile the same Court suspending the exhumation of the body of General Francisco Franco from the publicly funded memorial outside Madrid, built by the slave labour of the defeated in the 1936-1939 Civil War. The court described Franco, or “Don” Franco as they titled him as “head of state from 1 October 1936 until his death in November 1975”.

Franco launched a military coup in 1936 against the elected government of the Spanish Republic. In October 1936 only Hitler and Mussolini recognised Franco as head of state. Internationally the Republic’s President retained that position. The internationally respected historian, Paul Preston, described the Court’s statement as “bollocks.”

It was a word that had come to my mind listening to the Prosecution case earlier!

Jonathan Cook – The Crisis in Corbyn’s Labour Party is Over Israel, Not Anti-Semitism

In the past months there has been a great deal of discussion concerning anti-Semitism in the British Labour Party. Most of it on both sides, but especially in the corporate media, has been anything but […]