The EU’s plan to drastically increase imports of renewable hydrogen from North Africa is not realistic from a cost or energy perspective, and instead diverts renewable electricity away from local needs and local climate targets. 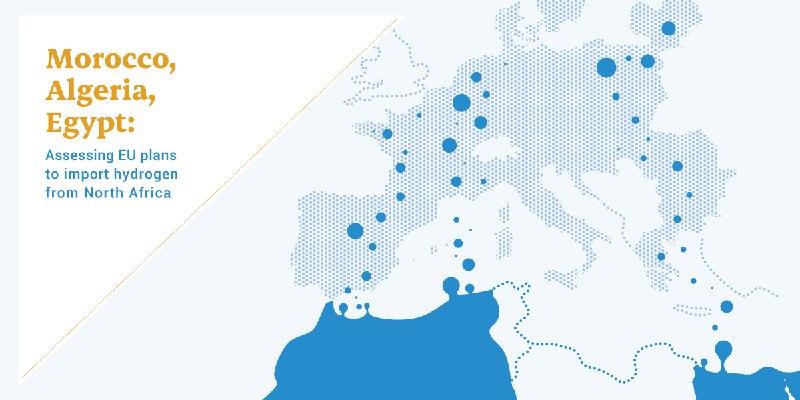 The European Commission’s 2020 hydrogen strategy has a big focus on importing ‘green’ renewables-based hydrogen from its neighbourhood (North Africa and Ukraine). Since the recent invasion of Ukraine and the subsequent need to reduce dependency on Russian gas, the EU has doubled its import targets to 10 million tonnes per year by 2030, as per the RePowerEU communiqué.

This report examines three North African countries that in recent years are increasingly focused on hydrogen, based in significant part on the interest of the EU and its corporations. Morocco, Algeria and Egypt are all planning to manufacture green hydrogen and hydrogen-based products, and ship them to the EU via boats and pipelines, to help meet this projected demand. But how feasible are such plans, how much would they cost, and would they be the best use of renewables in those countries?

There are big question marks over whether green hydrogen can ever be exported at sufficiently attractive prices, given the high production and transportation costs:

Green hydrogen could cost as much as 11 times more than natural gas per unit of energy at prices before the winter energy crisis and the invasion of Ukraine, even before storage and transportation. Hydrogen is expensive to distribute via shipping and pipeline, which is why today the large majority of it is manufactured at the point of consumption. Realistically, is Europe going to be willing to pay that very significant price difference?

North African governments and firms should therefore be wary of promises of large export markets for expensive to manufacture and ship green hydrogen, and the synthetic fuels made from it.

In oil and gas producing Algeria and Egypt, the hydrogen projects being explored are not just based on renewable electricity (‘green’), but also on gas with carbon capture and storage (‘blue’). Blue hydrogen is still double the price of unabated (‘grey’) hydrogen, and has the significant problem of high CO2e emissions, especially if the captured CO2 is used for enhanced oil recovery.

As all three countries examined have significant fertiliser industries, and either produce or import large quantities of grey ammonia, greening this domestic use could have a short-term climate impact before transitioning to agricultural practices that are not so fertiliser intensive.

The renewable electricity generated by these countries could also be better used to displace domestic fossil fuel power generation and meet local energy needs, while interconnectors with neighbouring countries – and eventually the EU – could help balance grids.

It makes little sense for Morocco, Algeria or Egypt to use their renewable electricity to make hydrogen and products from hydrogen, then ship them to Europe at significant loss of energy, so that the EU can achieve climate emissions reductions. And would European consumers be prepared to foot the very significant bill? The EU may need to re-examine its hydrogen strategy, in particular its green import targets, and reassess the feasibility and cost of achieving them.

Mariana Mazzucato – Green Growth and the Right Kind of Innovation

Without governments investing more actively we are not going to solve our current problems, whether the climate crisis, growing inequality, or the energy transition. So says Mariana Mazzucato, celebrated economist and adviser to today’s top […]

Renegade Inc – Michael Hudson: He died for our debts, not our sins

As we turn towards our faiths this Christmas and Hanukkah in an attempt to make sense of the year that was, economist Professor Michael Hudson says we have been interpreting the bible incorrectly. And he […]

After seeing his first pick for Commissioner rejected by the European Parliament due to concerns of conflict of interests, French President Macron seems to have doubled down with a potentially even more controversial nomination: Thierry […]