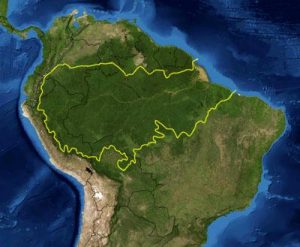 A multitude of images of burning rainforest have circulated across social media over the last week with the hashtag #PrayfortheAmazon. A familiar refrain in these tweets and posts has been: if billionaires could dig in their pockets for Notre Dame, why won’t they save the Amazon?

Why won’t the billionaires intervene? Because it is their agribusiness and financial markets which profit from the rampant extractivist model at the heart of this unfolding crisis. Many commentators have failed to identify the system that benefits the burning rainforest, or grasp who bears responsibility for it.

The Brazilian president Jair Bolsonaro has emerged as a dangerous bogeyman in this context (and, to be clear, Bolsonaro deserves none of our sympathy) with environmentalists proposing his censure, or even assassination, to try and stop the blaze. But Bolsonaro and the Amazon fires are a problem of our own making in the global north. Centuries of extractivism, of putting free markets first, and a tendency to see the Amazon as belonging to all of us (as opposed to the indigenous communities that live there) have all contributed to the situation. President Macron’s comments ahead of the G7 summit in France last weekend that “our house is burning”, or the much repeated idea that the Amazon holds the “lungs of the earth”, represent just another instance of would-be white saviours laying claim to indigenous lands. Meanwhile, free trade policies pushed by leaders including Boris Johnson at the G7 would give corporations even more power to challenge any environmental regulations.

Bolsonaro made the point numerous times in his election campaign that he would open up the Amazon basin to agribusiness, and he has stayed true to his word. Reports this month have demonstrated that Bolsonaro’s government is waging a deliberate war on indigenous communities in Amazonas and across Brazil in order to clear land for farming and big business. But Bolsonaro is only one part of an unholy alliance between the far right, global finance and corporate power. Credit Suisse, BNP Paribas, Barclays and JPMorgan Chase are among the Anglo-European financial institutions with investments in companies that are destroying the Amazon. The Intercept has also reported that two Brazilian firms owned by Mitch McConnell, a big ally of President Trump, are “significantly responsible for the ongoing destruction of the Amazon rainforest”.

The impact of this is truly terrifying and could be utterly catastrophic. If roughly another fifth of the Amazon rainforest is burned then the phenomenon known as “dieback” may lead to the total collapse of the Amazon ecosystem, with apocalyptic consequences for the global climate.

Yet one fifth of the Amazon was also destroyed in the 50 years before Bolsonaro’s rise to power, and it is crucial that we consider how Anglo-European corporations, global finance institutions, and previous Brazilian governments are implicated in this. We cannot simply abrogate responsibility for this crisis.

Furthermore, Bolsonaro is a figure worthy of denunciation for everything he does, and it is revealing that some politicians, environmental campaigners and celebrity figures have remained silent on Bolsonaro’s attacks on trade unionists, LGBTQ+ groups and feminists, but are outraged when he threatens the so-called “lungs of the earth”.

It is this implication, that the Amazon rainforest is somehow the collective property of everyone, which reveals a startling colonial tendency in responses to climate crisis. In these narratives, indigenous communities are either erased, represented without agency, or as essentialised guardians of the forest. The truth is that Brazil’s Landless Workers Movement, as well as social movements in Peru, Ecuador and across the Amazon Basin, have struggled for decades (if not centuries) to defend their communities. The Amazon is not ours to save with prayers and clicktivism; it is their homeland to defend (with our solidarity) against the global corporations and free trade deals which would open up the Amazon to more risk.

It is also no accident that Anglo-European minds are particularly fixated on the Amazon given that European empires, particularly the British, have felt they have a stake in the Amazon for centuries. Foreign Office diplomat Roger Casement’s reports to parliament on the rubber boom in Peru in the early twentieth century demonstrate how British companies enslaved indigenous communities and caused widespread environmental destruction in their pursuit of profits. Today, different companies are destroying the Peruvian Amazon in pursuit of oil money; the British government has been highly supportive of the Camisea oil project and improving trade links with Peru.

Understanding this is fundamental to how we meet the climate emergency. Jair Bolsonaro, Alan García (former President of Peru) and Lenín Moreno in Ecuador have not opened up the Amazon out of pure malevolence, but because economic success for their administrations is predicated on them selling their country’s natural resources to markets and financers in the global north.

But now is not the time to despair. If we truly want to stop the Amazon from burning we must immediately focus on building internationalist solidarity, through new and existing institutions, with indigenous movements Brazil, the Amazon basin and across the global south. There is a dire need to censure Bolsonaro for his actions against indigenous communities – through international pressure and perhaps even a general boycott. We must accelerate our plans to decarbonise our economies – being careful to dismantle our extractivist economic model in the process. And we must tackle the power of big business and the upcoming trade deals (e.g. Trans-Pacific Partnership, EU-Mercosur trade deal, and the corporate courts they often contain) that will give corporations even more power to destroy the climate at will.

Chris Bambery – Trial of Catalan Independence Leaders: Spain and the EU Versus the UN and Justice

The Catalans, like the Greeks before them, are learning what to expect from the EU. The Spanish government, now led by the Social Democrats, is learning that you can defy justice in the EU, when […]

Hubert Horan – The Uber Bubble: Why Is a Company That Lost $20 Billion Claimed to Be Successful?