If you leave it to economists to explain the wave of homelessness for the past decade, one receives a dry statistical analysis. Most of the media puts the blame on Russian oligarchs or Airbnb. Danny Dorling does a brilliant job of explaining where  the acute wave of homelessness came from, and who was responsible. Although focussed on Britain, much is applicable to other EU nations. 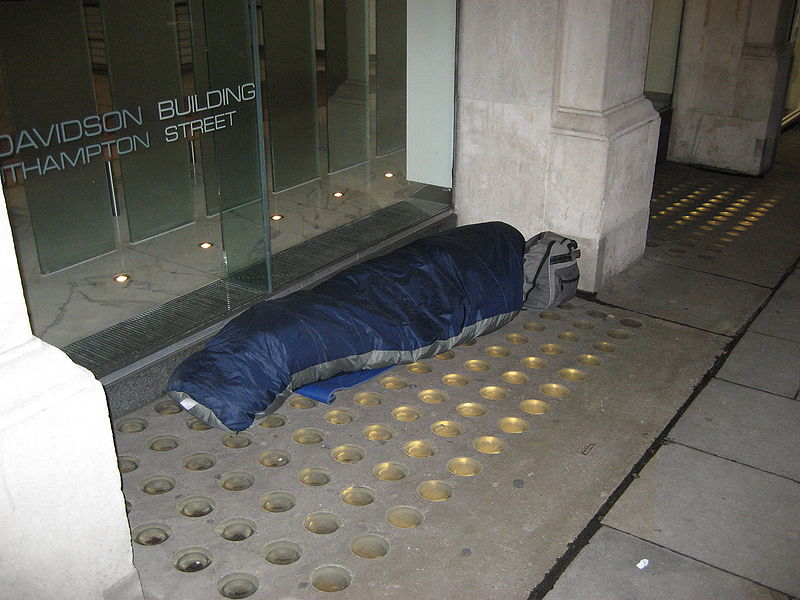 Today, one person in every two hundred in England and Wales is homeless – either sleeping rough or living in temporary accommodation. In London the proportion is even higher: one in 53. In Kensington and Chelsea it’s one in 29: in that borough alone 5,263 people are homeless. They are mostly not the same people as the homeless there last year. Most of those will have moved on to another area; some will still be homeless, some will have found housing of some kind, some will be dead

The number of homeless people started to increase around 2010, with the implementation of austerity. Between 2010 and 2011 the numbers living in temporary housing or on the street doubled in seven London boroughs. This pattern wasn’t confined to London: nationally, homelessness doubled and doubled and doubled again. You could argue that the census form should start to ask: ‘Have you ever been homeless, and, if so, when and for how long?’ It is not a question that has been put before. The last time people were asked if they had hot running water in their home was in 1971. We expect progress, but we don’t always get it. Many children spent last Christmas in a single room with a microwave in a B&B. In the first quarter of this year 123,130 children in England were living in temporary accommodation. That figure has been rising every year for a decade; it’s up nearly 80 per cent since 2011. Ten years ago, in January 2009, it was so low that housing charities were focusing instead on children living in overcrowded conditions.

In the 12 months to October, 449 homeless people died on the streets or in temporary accommodation, the highest proportion in January. A fifth of them were women; the gender of a tenth of the bodies could not be immediately determined. The annual number of homeless deaths has risen at least tenfold in the last five years, far more quickly than the increase in rough sleeping.

Since 1981 housing in England and Wales has been increasingly unevenly shared out. For the sixty years between the censuses of 1921 and 1981, as well as new housing being built each decade, the housing stock was better distributed at the end of each decade than at its start. In every census fewer homes were found to be empty or under-occupied or overcrowded than in the one before. A growing proportion of the housing stock was allocated on the basis of need. Families were offered council houses that had a commensurate number of rooms. In the private market, as incomes became more and more equitable, behaviour changed. People were more likely to buy homes closer to the size they needed, instead of much larger ones. Meanwhile, the inefficient private rental sector shrank.

We know that 1981 was a turning point because of work done by Rebecca Tunstall of the University of York. She has found that around this time the number of empty rooms in privately owned homes started to rise rapidly. As income inequality widened more rich people purchased holiday houses and city pads, making it harder for locals to afford homes. After Thatcher implemented her right-to-buy policy in the 1980s, the public housing stock – especially of more desirable properties – decreased, and so fewer homes were allocated on the basis of need, since councils owned fewer properties and weren’t allowed to build more. A maisonette that would have been home to a family of four became the property of a single yuppie (the number of one-person households has risen from 17 per cent to 28 per cent since the early 1970s).

The situation worsened in the 1990s, but the steepest increase in wasted housing space came during the New Labour years, between the censuses of 2001 and 2011. By 2011 the richest tenth of households in England and Wales had five times as many rooms in their homes, per person, as the poorest tenth. There was no longer any slack in the housing system. A much larger proportion of the few homes coming on to the market in the years after the 2008 crash were being bought by private landlords. Rent rose to whatever level the market could take. Homelessness duly began to rise in 2010.

One of the very first pieces of legislation the coalition government passed when it came to power in 2010 was a bill amending Empty Dwelling Management Orders. The Labour government had introduced these to enable local councils to take possession of disused properties and make them habitable. Any property that had been empty for six months could have an order applied to it. The scheme had been introduced in 2006 when homeless rates were low, and had helped them stay that way. Only a hundred or so orders were made while Labour was in power, but landlords knew they existed and made sure that their properties weren’t left empty. The coalition extended the length of time a landlord could leave a property empty in England from six months to two years. The next year only 17 homes had orders applied to them and many thousands of properties were left empty. By 2015 six hundred thousand properties in England were empty, but continued to make money as house prices rose. There has been a huge increase in evictions at the end of tenancies, the result of relentless rent increases. A quarter of all children in England live in properties owned by a private landlord and have on average just two months secure tenancy. Their parents are paying more per square metre to be housed than any other group. Tenancies coming to an end are also the main driver of the increase in street homelessness (families with children receive emergency housing).

When he was housing minister Brandon Lewis, now Conservative Party chairman, said that the compulsory purchase of disused property was ‘an ineffective and unpopular policy of the last administration, which undermined civil liberties and which simply didn’t work’. Lewis held the job until July 2016 when he was replaced by Gavin Barwell. Less than a year later Barwell was replaced by Alok Sharma. Having served for under seven months Sharma was replaced by Dominic Raab. Raab lasted six months before giving way in July to Kit Malthouse. In 2004, as deputy leader of Westminster Council, Malthouse had introduced the policy of using police officers to help street cleaners hose down areas where homeless people slept. Last December, the Public Accounts Committee announced that as many as 9,100 people were sleeping rough on the streets on any one night in England. ‘The Department for Communities and Local Government’s attitude to reducing homelessness has been unacceptably complacent,’ it said. ‘The limited action that it has taken has lacked the urgency that is so badly needed and its “light touch” approach to working with the local authorities tackling homelessness has clearly failed.’

What is to be done? A few schemes are being piloted, often poor copies of ones that have worked elsewhere, for example in Finland, where homelessness is low and falling. But the dominant narrative in this country tells of the perceived failures of those who become street homeless: their alcohol dependency, substance misuse, and ‘high/complex needs’. I saw my first dead body when I was a child, walking to the pantomime in Oxford in the early 1980s. My father told me that the man was sleeping, but he wasn’t. I remember us staying with the body and how long it took for the ambulance to arrive. They were in no rush. I remember that we were late for the show. I couldn’t see the man’s face – only his coat and hair.

This is a bit late, but is the only objective article we could find concerning the recent Catalan elections. Paul Kennedy is a Lecturer in Spanish and European Studies at the University of Bath David […]

Yanis Varoufakis – Central bank independence is a myth. What about green central banking?

Last week the ECB announced its new policy of ‘going green’. How can a conventional central bank do this? Only by discriminating against bonds and equities issued by companies damaging the environment that it accepts […]

Flygskam, or “flight shame,” has done little to counteract the effects of air travel. Ivan Marc/ Shutterstock Roger Tyers, University of Southampton Despite flying being the single fastest way to grow our individual carbon footprint, […]