The Leftists in Scotland´s independence movement are coming to a sobering realisation. The nationalist party, the Scottish National Party, to which they have look for leadership, has its own agenda: maintaining the status quo, simply with the difference that a Scottish bourgeoisie will lead the nation and skim the cream, not a British one. This is similar problem facing the Catalan independence movement. To their credit, the Scots are confronting this domestic challenge to self-determination.

Cross-posted from the Rosa-Luxemburg-Stiftung blog 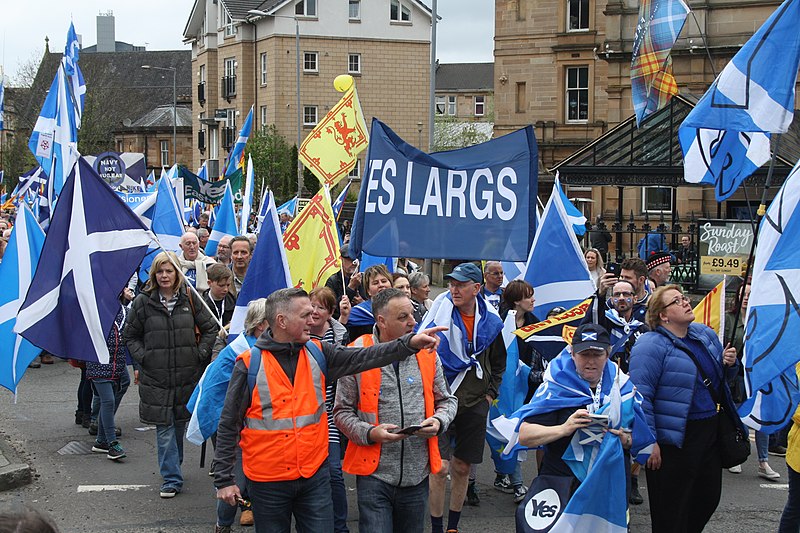 Brexit represents the latest manifestation of a deeper constitutional and political crisis affecting the British state, in which the Scottish question is a key factor. In this week’s guest post, David Jamieson outlines how the Scottish National Party (SNP) has responded to Brexit by rooting itself more firmly in political centrism and pursuing the objective of ‘independence’ within the existing economic and political order. This, he argues, has created the opportunity and necessity for a grassroots left-wing response.

The Scottish pre-history of Brexit

One might have imagined that Brexit would present a major historical opportunity for a Scottish independence movement riding high after its 2014 victory.

For really, that is what securing a 45% Yes vote in September of that year was. We now know that Cameron’s advisers in the Conservative party understood it to be an exemplary defeat over an intransigent and well-established Scottish nationalism. This understanding partly informed the Remain campaign’s strategy in 2016, with disastrous consequences for then Prime Minister David Cameron and the wider British political establishment.

In reality the idea of Scottish independence was a fringe political concern when the SNP won office in the 2011 Scottish elections. SNP leader Alex Salmond tried to avoid a Yes/No independence referendum, so convinced was he of the weakness of pro-independence sentiment. He instead wanted an option for the further devolution of powers from Westminster to Scotland – a far more historically popular policy.

In many ways, the Scottish referendum era presaged the 2016 Brexit vote. The surge in support for independence in 2014 indicated the political bankruptcy of the UK’s political leadership, who had nothing to offer Scots but grim continuity. ‘Project Fear’ was not the name independence campaigners gave to Better Together ‘No’ campaign; it was the name they gave themselves in private before being leaked to the press.

The demonology of the Brexit era was first trialled in Scotland. Independence supporters were ‘Cyber Nationalists’ who were dangerous, hectoring, bullying and intolerant. No voters were the original Remainers – liberal minded, educated and pragmatic.

After 18 September 2014 Yes voters and independence activists, infuriated with having been maligned by the press and politicians and still passionately hoping for independence, rushed into the SNP – making it one of the Western world’s largest political parties per head of population.

But this party, forged by an era of populism and constitutional crisis has not made an opportunity of the Brexit impasse. Instead, under the influence of a leadership lacking any understanding of the British state crisis, it has clung to the ruling class and the British state for orientation.

Since the Leave vote, the SNP have accelerated a strategy to make Scottish independence acceptable to existing power structures and elites both within Scotland and abroad.

This strategy of integration is not new to the SNP. Under the leadership of Alex Salmond, the modern party’s architect, the SNP was firmly won to gradualism on the constitutional question. Salmond had a populist instinct to position the party to the left of New Labour and the Westminster political consensus with just a few cleverly placed policies. But it was under Salmond that the party abandoned its opposition to an independent Scotland’s membership of NATO.

It was in the Scottish government’s White Paper on independence that he proposed a series of positions – including a monetary union with the remaining UK state – that pointed towards the logic of ‘independence lite’, laying the way for a sorry future.

The populist sensibility has largely vanished under the leadership of Nicola Sturgeon, and a clique of right-wing elements has gathered and is fully in ascendance.

They include Andrew Wilson, the chair of the SNP’s Growth Commission, set up by the leadership to provide a blueprint for a post-independence Scottish economy. Wilson is a former RBS senior adviser and Director in Charlotte Street Partners, a secretive corporate lobbying and public relations group at the heart of Scotland’s networks of elite power and influence.

The report he published in 2018 exceeded the worst fears of the pro-independence left. Scotland would face years of public spending restraint after independence, advance a deficit reduction programme and maintain alignment with financial regulation in the City of London. But the standout horror from the report was its plan for Sterlingisation; Scotland would continue to use Sterling after independence without any recourse to monetary policy, without a central bank and with no ability to print money. Bizarely, the model for this arrangement put forward by leading members at the forthcoming SNP party conference is the Irish Free State, which is still living with the consequences of its long-term dependence on the fortunes of Britain.

These policies not only jar with the left-wing character of so much of the 2014 independence movement. They also jar with the SNP’s wider centrist political orientation. Under the Maastricht Treaty no country may join the EU without a fully independent central bank.

Yet the strategy of the SNP’s leading faction could now be described as ‘independence by deep globalisation’. Independence is made safe for domestic and foreign elites by off-shoring the country’s sovereignty to various institutions – foreign policy to Washington and Nato, trading relations (and much else besides) to the EU, and monetary policy to London and the remaining UK state. Independence then becomes a formality – a mere changing of the flag.

This only demonstrates the extreme incoherence of an elite-led independence movement, something made all the more stark when we look at the SNP leadership’s relationship with the Brexit crisis.

From the start the party faced a simple strategic choice: seek advantage for the independence movement by exploiting the contradictions of the British state, or side with the Remain lobby representing the bulk of elite interests.

Immediately after the vote to Leave in 2016 Sturgeon put another referendum on independence “on the table”, something she was mandated to do in the SNP’s Scottish election manifesto in 2017. This move gained the support of a majority in the Scottish Parliament. The request for talks on an independence referendum were then immediately refused by Theresa May.

Since then, the party has pursued an alliance with the British political centre, with demands for a soft Brexit and more latterly a second referendum on UK-EU membership. This blunder has fostered the most interesting development in the broader independence movement since 2014; a large street movement detached from the party’s leadership.

Tens of thousands have repeatedly marched in Scotland’s cities and towns, including in remote places which have not seen such sizeable demonstrations for decades. Organisers claim their largest march, in Edinburgh in October 2018, to have reached 100,000. Scotland has never seen a pro-independence movement of this scale before.

Sturgeon herself has attended none of these marches. Speaking at her party conference just after the Edinburgh manifestation, she warned marchers to be patient.

In March this year she attended the large demonstration for a People’s Vote in London, organised by establishment figures. The message was a clear one – Sturgeon won’t leave her front door in Edinburgh to join her own supporters in a march for her party’s flagship policy. But she will turn up in London to defend the stature of the British state at its lowest ebb.

And she will share a platform with the same figures who fought against independence in 2014, and have said openly that should a second referendum on the UK’s EU membership be held, this would provide the precedent for a second vote to ratify any future vote for Scottish independence.

The SNP’s orientation deserves lengthy consideration for a simple reason: it remains a length ahead of all its political rivals, left and right. Its base has shown remarkable solidity since 2014, and there are few signs of it weakening. Crucially, the policy with which it remains most associated, independence, still carries considerable enthusiasm among active layers of the working and lower-middle classes.

The one major question the party faces is how its support will react if it becomes apparent that no independence referendum is likely in the short term. Indeed, it is entirely possible that the leadership see independence as an ultimate goal on an unknowable timescale – what we might call ‘Québécoisation’.

In the meantime all other political forces remain in a precarious and frustrated state. It seems for now that the Tories have met their limit for growth, particularly tied as they are to a mother party falling apart under the Brexit strain. The Scottish Greens, a more established tradition north of the border than elsewhere in the Kingdom continue to press for immediate answers on Scottish independence, but they too are caught between this question and an ultra-People’s Vote orientation.

Scottish Labour, the rump figure of a once dominant party, has moved left into the wake of Corbynism. But Richard Leonard’s version of Labour leftism is less dynamic than Corbyn’s and more represents the bureaucratic soft-leftism of the Union leaderships. His greater problem is that Labour’s appeal remains hemmed-inn by the legacy of its alliance with the Tories in the Better Together campaign, and by the subsequent loss of many working-class Labour heartlands to the SNP.

The extra-parliamentary scene has seen some bright moments. The 2018 women’s equal pay strike in Glasgow was the largest and most successful in UK history, with 8,000 women winning £500 million in payouts after a twelve year struggle with the council.

Recent years have also seen the growth of a tenants’ union – Living Rent – particularly in Scotland’s cities, which is fighting and winning on a range of fronts.

Greater efforts have been made to unionise parts of the economy infamous for low pay, precarious conditions and under-unionisation, particularly Scotland’s large hospitality sector.

But the general picture reflects the wider Anglosphere and Western left. Organisational and intellectual traditions have atrophied after decades of setbacks.

At its worst this leaves the left vulnerable to the same disorientating forces as the SNP. Caught in the confusion of the era of de-globalisation and rooted in a past of relative constitutional peace, the SNP has collapsed into the embrace of more powerful actors.

Scottish socialists must establish their own independence from the institutions of British and European capitalism to be a viable force in the future of this historic crisis of the state and political establishment.

European governments’ climate plans will not meet the EU’s 2030 decarbonisation target for transport, a new analysis shows. Yet the European Commission is letting national governments off the hook in refusing to criticise them, said […]

Jonathan Cook – The US is using the Guardian to justify jailing Assange for life. Why is the paper so silent?

The role of the Guardian in the prosecution of Julian Assange is ignominious, as is the case in so many other matters. To see the complete Tweets in this article just click on them. Jonathan […]