Lignite mining in Germany is under attack from all sides. Can it survive until 2038? And if it doesn’t, who will pay? LEAG, the biggest operator of mines and power stations in the east has built up few reserves. 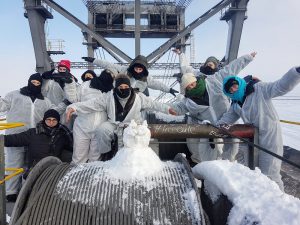 At the end of November hundreds of protesters in white overalls are expected to swarm again over the opencast lignite mines in the Lausitz, east Germany. They were last there in February, occupying  a giant excavator the size and shape of a horizontal Eiffel Tower (see above). The forthcoming protest – master-minded by Ende Gelände an environmental group – is timely. There are increasingly urgent questions about the viability of these brown-coal mines and the four giant power stations that feed on them – which together produce some of the dirtiest emissions on the planet.

First, there was a report in July by Sandbag, an energy consultancy, which calculated that profits made by Germany’s lignite “fleet” collapsed by 54% in the first half of 2019. Solar and wind power are eating into the lignite-fired stations’ “baseload”, which is where they make the most profit. Sandbag believes that “lignite will remain unprofitable over the medium term”.

If Vattenfall, the Swedish state-owned energy producer, still owned these east German assets, there would at least be some comfort: that the lignite power stations, and the mines that feed them, would be wound up in orderly fashion, with some attempt to make good the scars on the landscape.

But in 2016 Vattenfall sold its assets to EPH, led by Daniel Kretinsky, a Czech billionaire and PPF, a Cyprus-based investment vehicle linked to Petr Kellner, another Czech billionaire. Not much was known then about EPH, except that it already owned Mibrag, an operator of lignite mines and power stations in nearby Saxony. Although some concerns were raised, about an ongoing criminal investigation into the then managing director of Mibrag, the deal – tantamount to a privatisation – went through.

Last week, the Berlin-based Forum Ökologish-Soziale Marktwirtschaft (FÖS), published a short study on the future liabilities of the lignite industry and who might end up paying for them. It reminded readers that Jan Springl, head of EPH in Germany had said in December 2017 that under the present construction the parent company was not responsible for the liabilities of LEAG, its Lausitz energy subsidiary.

In August, LEAG agreed to pay its first 10m euros into a rehabilitation fund by the end of the year. That is a start although the final cost of making the landscape whole again – where possible – is put at between three and ten billion euros. LEAG is obliged to build up a fund of 770m euros by 2033 to cover some of these costs. But what happens if LEAG goes bust?

A document obtained recently by Sweden’s TV4 and reported in Dagens Nyheter show that this eventuality was only fleetingly dealt with in 2016 as part of the seller’s due diligence. Law firm Freshfields had pointed out concerns about the buyer, EPH, but left the final decision to Vattenfall.

Klima-Allianz, an alliance of more than 130 environmental groups, put out a press release (here in German) on November 7th, describing how the scandal has flared up in Sweden and is being investigated by the Swedish parliament’s Economics Committee. Three representatives of the alliance expressed their indignation:

Stefanie Langkamp, Klima-Allianz, Germany: “There are countless questions still open about the new operator LEAG. If they are put off any further, in the worst case this will lead to a billion-dollar shortfall in the state coffers – money that is needed more urgently for socially acceptable structural change.”

René Schuster, Grüne Liga: “It is irresponsible to make the re-greening of the landscape dependent on the continued operation of other opencast mines. Ultimately, the state is being blackmailed here into either agreeing to long-term coal-fired power generation or paying the follow-up costs.”

Karsten Smid, Greenpeace: “The Swedish parliament was apparently not fully informed about the allegations of corruption against Czech investors before the sale. In addition, the government documents on the sale of Vattenfall’s lignite business, which have been widely blacked out, show further inconsistencies that urgently require clarification by the state governments of Brandenburg and Saxony.”

Vattenfall must be congratulating itself on having got out of a black hole in the Lausitz in 2016. EPH may be regretting the purchase, although until recently it probably made good money.

According to Sandbag’s calculations, LEAG had some profitable years until mid-2017 but now the future looks bleak. Two power units at Jänschwalde have been shut down, one since last year, the other since the end of September – but because they are on standby as capacity reserve LEAG is presumably being paid some compensation. There has been no mining at Jänschwalde since the end of August, when the mine failed a sustainability test. [Though on November 12th the excavators were allowed to resume digging “for safety reasons” to control the groundwater.]

The German Coal Commission, which reported in January 2019, allowed for the prolongation of lignite mining and power generation until 2038. One concern is the preservation of jobs and east Germany’s major industry. But there is increasing pressure on all sides to bring that date forward to 2030 or even earlier. The protesters of Ende Gelände may be aiming for closure a little sooner – perhaps on November 29th.

This is being replicated in the EU By Hannah Dewhirst, Campaigner at Positive Money Cross-posted from Positive Money The government’s new Build Back Better council – meant to help the UK recover from the impact […]

Patrick Cockburn – The Taliban May Pretend to Show Moderation, But the Murderous Reality is Far Different

What is currently occurring at Kabul airport is just the prelude for radical change in Afghanistan Patrick Cockburn is the author of War in the Age of Trump (Verso) Cross-posted from Counterpunch Photograph Source: Michael Evans […]

How many articles, commentaries, and other media reports were we confronted with concerning “fake news”? No one mentioned “bought news”, which is a greater menace. The goal of corporate media is profit. Those paying for […]